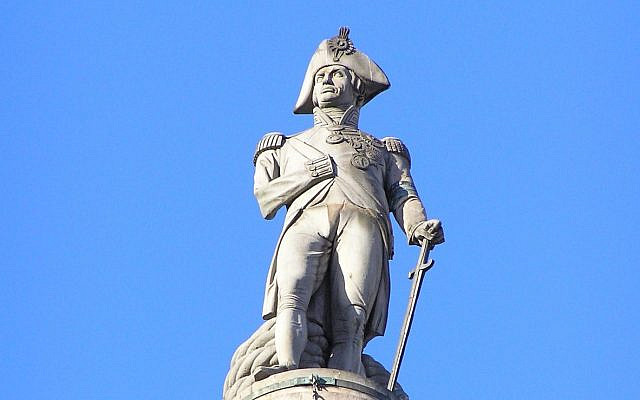 There can be few people who have not seen Nelson’s column, either in person on a visit to London’s Trafalgar Square, or in a newspaper photograph or TV news item.

Not so many have climbed to the top of the 51.59 meter edifice. The first to reach the top, in 1978, was a British climber, Ed Drummond. He was promoting the Anti-Apartheid Movement. The climb took four hours and caused chaos as traffic and pedestrians stopped to watch.

In 1988, Joe Simpson and John Stevenson climbed the column as a Greenpeace protest against Acid Rain.

In 1998, a trio climbed the Column, again on behalf of Greenpeace but this time to protest ‘Old growth’ logging activity in British Columbia. (Old-growth trees, at least 250 years old, are increasingly rare and are much prized by timber companies who are enthusiastically chopping them down.)

To gain attention to the plight of Tibet under Chinese rule, Gary Connery climbed the column, then parachuted from the top in 2003.

Perhaps the most publicised climb was in 1989 when a TV entertainer, Gary Wilmot, set out to recreate the 1843 ‘topping out’ ceremony for TV’s Six O’ Clock Show. He wore Victorian clothes, complete with a boater hat, and had tea and sandwiches on the top before making his way down.

It seems that nobody has been prepared to make the climb just for the fun of it. Every climb has been to promote or demote something.

But it might be all over for the famous admiral. We read that Lord Nelson’s ‘heroic status’ is to be reviewed by the National Maritime Museum. The museum, we are told, will take advantage of the ‘momentum built up by Black Lives Matter’ to address ‘aspects of slavery relating to the Royal Navy’. A panel of trustees and community groups will oversee ways to handle these issues, from removing outdated language in exhibits to using a database to find any links to slavery.

In another blow, the book, Nelson: The Man And The Legend, published in 2002 by Terry Coleman, suggests that while Admiral Nelson was a naval genius, and was the right man in the right place during the Napoleonic Wars, he was ruthless, vain, heartless, a hypochondriac, and a self-obsessed, publicity-seeking war criminal. No wonder he has, quite literally, a chip on his shoulder. A part of Nelson’s shoulder was chipped, back in 1896, after the column was struck by lightning.

It looks as if the time has come to topple Nelson’s Column.

But, while Nelson is, most of the time, alone on his perch there are many others who might share his fate. The UK’s Public Monuments and Sculpture Association, yes there really is such an association, has spent more than three decades listing public sculptures across the country. It will come as no surprise that out of the 828 statues it recorded, just 174 of them were female figures.

But it gets worse, most female statues were just nameless females, usually missing some important items of clothing, intended simply as decoration. In contrast, 422 of the 534 statues of well-dressed men are named, with full details of their achievements.

It takes a lot of time and effort to create new female statues. Much simpler, and in keeping with these times of ‘gender equality’, to pull down most of the men. While the bulldozers are dealing with Nelson we can find lots more work for them.