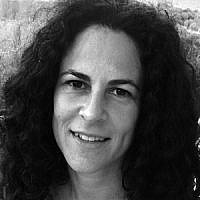 The Blogs
Judit Bácskai
Apply for a Blog
Please note that the posts on The Blogs are contributed by third parties. The opinions, facts and any media content in them are presented solely by the authors, and neither The Times of Israel nor its partners assume any responsibility for them. Please contact us in case of abuse. In case of abuse,
Report this post.

At least, that was what they believed, those people who believed in God. This is what I thought. What I didn’t understand was why, then, they didn’t do everything they could so that they wouldn’t have to turn to this guy (because God was a guy, as a matter of course).

I thought you only had to live life in the right way and then you would need nobody and nothing. And if trouble came…? Well, I really doubted if God went racing to the aid of his believers like some kind of ambulance.

I don’t know what has changed exactly. In many respects my view has remained the same, I still can’t visualize God as an ambulance. It is as if I saw things from an entirely different angle. Somehow all that proof I imagined standing there, the size of a hill between me and the existence of God suddenly means something totally different from where I’m standing now.

We went to a concert in the synagogue.

A Jewish band had come from Budapest to give a concert on a hot August day.

The Jósika Street synagogue was one of the secrets of my life. There it was for all to see, one of the largest synagogues not only in Hungary, but in Eastern Europe. Still, for me it was somehow a  hidden place. In Szeged our family didn’t lead a Jewish life, as a kid I didn’t even know what it meant. All it meant was that in the war everybody was taken away and killed. That’s what I understood when my father told me why on his side we had no more than one or two relatives, no aunts or cousins and such like, though we had these in abundance on my mother’s side.

We lived in the same street as the synagogue. Two houses down, next to the Jewish community centre. There was a wing for the elderly, as well. And sometimes the ambulance stood there. Not only did I pass it on my way to kindergarten, and then to school, but also, whenever I went to the playground with my brother or we rode our bikes, there it was. The enormous building was a commanding presence in the garden overgrown with trees and bushes, enclosed by wrought iron fence.

We never went inside.

It was a colossal existence we didn’t have a use for. Neither did I see others use it, it simply was.

Sometimes a group of tourists might go inside to take a look, or Uncle Marci the old cantor shuffled along from his flat in Gutenberg Street, but I would try to avoid him because he always embarrassed me by saying all sorts of things that were meant to be funny. And, naturally, as a teenage girl simply the thought of having to use the customary greeting for kids in Hungary: „Kiss your hand” with any „uncle” became unthinkable.

The synagogue just stood there, I supposed it had seen a lot, heard a lot, but I couldn’t really understand how it could still be alive when so many people had been destroyed for being Jewish. Because the synagogue was Jewish, too…

And so it went at the time. My classmates didn’t even understand the word ’synagogue’. Because it was a kind of church, wasn’t it? A Jewish church. In the seventies or eighties it looked like a depressing light seeping from the past. It didn’t think I had anything to do with it, except that it was family (After all, it was Jewish, right?)

In our family nobody believed in God, wouldn’t want to do anything of the sort or in the vein of. Neither did they give any thought to being Jewish. We were Jewish, full stop. Nobody had to do anything about it.

I became a ’Little Drummer’, then a Pioneer. I went on cheerful and adventurous kids’ camps, on hikes, wrote for the school newspaper, managed the school radio, then came high school, university, work abroad, the stumbles and falls of growing up, friendships, love affairs, the search for work, the search for life. And somewhere in between the dizzying rollercoaster rides of happiness and sorrow, joy and disappointment I got fed up.

I didn’t find myself, I didn’t know which way to go, where the road was, or if there was a road at all? And where did it lead? With whom? Or perhaps alone?

The synagogue stood there still, the yew trees in the garden leant over me, their branches hanging ever lower when I walked under. I didn’t live in Szeged any longer, so these walks became rare.

My friends in Szeged got married one by one, but I was far away. When once I actually happened to be in town for a wedding I simply couldn’t go. I couldn’t make myself go there, because I didn’t know how to act, who I was supposed to be.

I felt it was a task I couldn’t even begin, let alone accomplish. The idea that I was, simply was, I was who I was, and I could just be there at such an important moment of a friend’s life, that thought didn’t even cross my mind.

Then I met someone.

Something different happened. Something new came to life. Something strikingly wonderful that felt like home. A relationship that neither of us wanted to end.

And finally loneliness and despair was over.

And finally everything changed. I had a family, and children.

And then, one night as I was standing out on the balcony mooning, something happened. I thought about the Universe, how all that surrounds us and fills us inside had come about. And I suddenly knew. That was it.

I knew there was God.

It wasn’t the world that had changed, I had.

I just moved and saw that God had always been. I simply hadn’t seen.

So, we went to a concert in the synagogue in Jósika Street.

A Jewish band from Budapest came to give a concert on a hot August day. Truth be told, it was sweltering that day, but inside it was cooler. The band leader, a rabbi we knew, fused traditional religious melodies with rock.

It was a bit funny, a bit too loud.

We sat at the back, my father and me, next to us my two little sons and their father. The kids were not so little anymore, the older one was eleven. We hadn’t been to this synagogue, it is being renovated, but we usually go to synagogues in Budapest. That is where we live.

We go to Szeged to visit the grandparents, in the summer, for holidays. So the synagogue is close, only two houses down.

We wanted to come to the concert.

I and my father sat in the back row. The kids kept running about.

The music was too loud.

So, I couldn’t make up my mind if I liked this rock-style concert.

I took a look around the synagogue and I thought how strange it was that I had actually never set foot inside it. The building is beautiful, an imposing space, the balcony, the colourful stained-glass windows. I stared at the ornate dome, an old friend. I had been to synagogues more than a hundred times or two hundred, but never here. This synagogue hadn’t become part of my life as Budapest synagogues had.

This was the past. Childhood nostalgia, memories and not the reality of Jewish daily life.

The music was sometimes dreadful, sometimes delightful, I tried to enjoy it.

I looked at my father and I couldn’t make up my mind if he liked it or just felt an obligation to be here. It was his duty.

Then came another melody, a slow, melancholy sound. I recognized it, it was a song I had heard for the first time the year before and one that touched me deeply.

Life is a narrow bridge.

But you have to cross that bridge and shouldn’t be afraid. Just go.

Memories came in waves as if pages of a book were flipped through.

Life is a narrow bridge.

Whatever happens you have no choice, you have to go on.

We have made a decision to move our family to Israel. A country I have never been to before. Neither of us has. It would have been completely unimaginable in the case of any other country.

But this is Israel.

This is where the Jews live. So we have decided to go there. Because that’s what we are: Jews.

We want to be Jews. We don’t want to look like we are not, we want no more explanations about what we think and what we believe in.

We don’t want to be afraid.

This is what the narrow bridge means to me: life goes on and we can’t wait for somebody to promise that nothing bad will ever happen to us.

We have to start walking on that narrow bridge because that is life.

Perhaps people who we love will die, perhaps other bad things will happen to us, but this narrow bridge is life.

And you shouldn’t be afraid.

So I sat on that bench and sang the song Kol haOlam Kulo at the top of my lungs, tears flowed free on my face, my husband and my kids just looked at me smiling, they had already got used to mom crying all the time. I thought I had never been so happy and so free.

Me, on the verge of a new life.

My father had got bored by that point and left. He didn’t see what it meant for me to be free, to be Jewish.

And I applauded, shouting to call back the band for an encore from the first row some minutes later when the concert wrapped up, and I sang Kol HaOlam Kulo all the way through again. In the old synagogue of my childhood.

Because this is the most beautiful thing in the world.

To listen to music, to sing with people you love.

About the Author
The wind. That’s what the desert means to me, the kibbutz that I now live in. That constantly blowing wind that washes over me, slowly flushes off all the pieces of mud that has clung to me the past years. In the country I had left I would have had no chance of ever rinsing it off. But here in Israel somehow every day is a new promise, the promise of a new life.
Comments