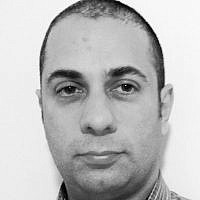 The Blogs
Andrew Apostolou
Apply for a Blog
Advertisement
Please note that the posts on The Blogs are contributed by third parties. The opinions, facts and any media content in them are presented solely by the authors, and neither The Times of Israel nor its partners assume any responsibility for them. Please contact us in case of abuse. In case of abuse,
Report this post.

For years, the Labour Party in Britain has allowed Jeremy Corbyn to promote crackpot policies because he was on the margins of politics. His parliamentary colleagues, in my experience, regarded him as an amusing crank. One Labour MP told me that Corbyn once turned up in his Midlands constituency with a Geiger counter, apparently concerned about nuclear radiation. While chuckling at Corbyn, the Labour Party has ignored how he has promoted a dangerous pacifism and introduced hatred from abroad into British politics. Now that Corbyn could be about to win the Labour leadership, the time has come for an argument with him and the Leftism he represents.

The problem is not just that Corbyn hangs around with dictators. This is quite common in British politics. The British Left seems to think that Cuba solidarity means visiting whichever of the Castro brothers is available from geriatric care. Labour MPs find nothing odd about sibling Communism. It is the same with the Tories. Edward Heath had a soft spot for the Chinese Communists. Thatcher was open in her support of Pinochet. The Tories retain a warmth for foreign thugs because of the potential for exports, as Foreign Secretary Philip Hammond made clear when he spoke of the “quite substantial” business that could come from rapprochement with Iran.

The problem is not just that Corbyn has a fondness for Britain’s enemies. There is a long tradition of apologia for those who wish the United Kingdom ill, particularly on the Left. It is not just Corbyn who seems to think that NATO and the U.S. are the root of all evil. Just last year, Alex Salmond, then the first minister of Scotland, had admiring words for Vladimir Putin because the Russian leader had “restored a substantial part of Russian pride and that must be a good thing.” The short-lived Conservative Friends of Russia was in essence a creation of the Russian embassy.

The larger problems are that Corbyn promotes an empty pacifism and men who preach hate.

The difficulty with Corbyn’s moral relativism, such as comparing the United States to the so-called Islamic State, is that it leads to foreign policy paralysis.  According to Corbyn Leftism, we can never help people in distress because we and our allies do not have clean hands. Anything we do apparently only makes matters worse. We are supposed to sit back and watch as the gang of rapists that calls itself the “Islamic State,” which is not bound by such concerns, does as it pleases. Corbyn wants dialogue and a political solution when the self-proclaimed Islamic State wants to murder and destroy.

The worst thing for Corbyn Leftism is to intervene in alliance with the American “imperialists.” Yet the only way to stop Abu Bakr al-Baghdadi’s forces from exterminating the Yazidis of northern Iraq in August 2014 was American bombs. The so-called Islamic State imprisoned, tortured, and raped thousands of women and girls. Although limited and late, American military action saved tens of thousands of lives. Corbyn opposed the intervention.

Second, Corbyn has imported hatred into Britain. In 2009 Corbyn invited Dyad Abou Jahjah to speak in the Commons. Abou Jahjah ran an organization called the Arab European League (AEL), which responded to the Danish cartoons of Mohammed with a drawing of Hitler in bed with Anne Frank. AEL claimed that “If it is the time to break Taboos and cross all the red lines, we certainly do not want to stay behind.” Trivializing the Holocaust and child rape has no connection whatsoever to the Danish cartoons. As part of its “taboo breaking,” the AEL referred to “hoax gas-chambers built in Hollywood in 1946 with Steven Spielberg’s approval stamp,” called homosexuality “a sickness and a deviation,” and homosexuals “AIDS spreading fagots” Abou Jahjah now claims this was all just satire. Maybe it’s just the way he tells them.

By inviting Abou Jahjah, Corbyn legitimized homophobia and the trivialization of genocide. Corbyn is no bigot, but he promotes views that are inconsistent with decades of Labour politics. Labour repealed homophobic legislation that had been introduced by the Conservatives, lifted the ban on homosexuals in the armed forces. Labour instituted national Holocaust commemoration and supported Holocaust education in British schools.

Corbyn Leftism is more than an embarrassment. It is a disgrace that the Labour Party must confront.

About the Author
Andrew Apostolou is a historian based in Washington D.C. He has a D.Phil. in history from Oxford University and has worked on human rights campaigns in the Middle East.
Related Topics
Related Posts
Andrew Apostolou
Comments