The Blogs
Ted Deutch
Apply for a Blog
Advertisement
Please note that the posts on The Blogs are contributed by third parties. The opinions, facts and any media content in them are presented solely by the authors, and neither The Times of Israel nor its partners assume any responsibility for them. Please contact us in case of abuse. In case of abuse,
Report this post. 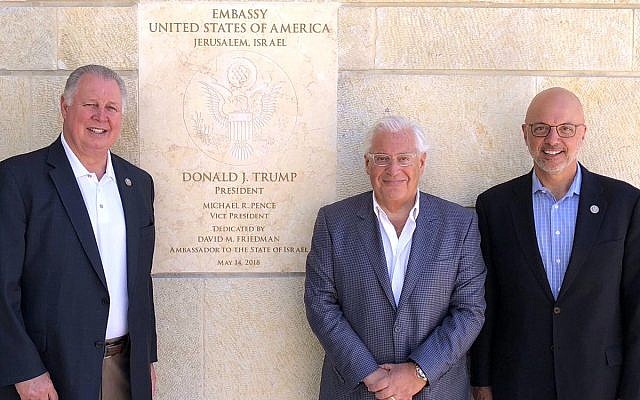 Rep. Ted Deutch (D) on a visit to the new US embassy in Jerusalem

From its headline to its conclusions, this week’s New York Times article claiming that a “New Wave of Democrats” is testing the party’s support for Israel gets it wrong and misses the real story in this House election season.

If the Democrats recapture the House majority, it will be because of the overwhelming majority of candidates – the real “new wave” – who will continue our party’s strong support for America’s relationship with the lone democracy in the Middle East.

Many Democratic Members of Congress, myself included, are helping to educate our potential colleagues, especially those without previous foreign policy experience, about the deep bond between the United States and Israel – from shared security concerns to the vibrant democracies in both countries that welcome voices from across the political spectrum. Democrats in Congress and on the campaign trail who have long fought for social justice understand that there are a multitude of voices in Israeli politics that echo their own. They know that a two-state solution is the goal, but a Hamas-run Gaza and Palestinian payments to terrorists make that goal unreachable today. And they understand that the Boycott, Divestment, and Sanctions (“BDS”) movement that questions Israel’s very right to exist unfairly treats Israel differently than every other country in the world; moreover, BDS undermines the prospect for a two-state solution and the Israeli, Palestinian, and American advocates working toward it.

Democrats have been helping to lead the fight against anti-Semitism and BDS, and strengthening our security relationship with Israel. Remember it was the Obama Administration that negotiated an unprecedented level of assistance to Israel in the current 10-year Memorandum of Understanding. The Times article ignores that core of support and makes an unreasonable and unfair assumption: that Democrats cannot call on Israel to live up to its democratic values while continuing our close relationship with the country and our strong support for Israel’s security in an otherwise undemocratic and dangerous region. And Democrats understand that just as their appreciation of and support for our great country does not waiver when they disagree with this Administration’s policies, so too does Democratic support for Israel remain strong despite occasional disagreements with Israeli officials over policy decisions they may honestly question.

Those who seek to politicize the U.S.-Israel relationship can generate news stories about a handful of individual Democratic politicians. Voters should be confident that support for Israel will continue to be a staple of the Democratic party – just as it has been since President Harry Truman first recognized the State of Israel 70 years ago.

About the Author
Ted Deutch is a Democratic member of the United States House of Representatives for Florida's 22nd congressional district.
Comments