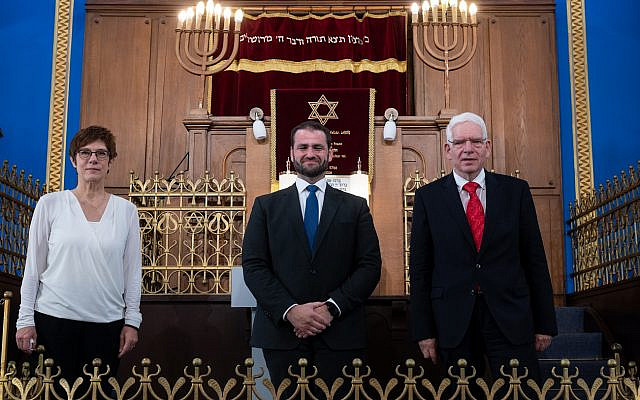 Annegret Kramp-Karrenbauer (CDU), Federal Minister of Defense, Zsolt Balla (M), State Rabbi of Saxony, and Josef Schuster, President of the Central Council of Jews, stand next to each other in the synagogue. Balla was previously inaugurated into the office of military federal rabbi in a ceremonial act. According to the Central Council of Jews, this is the first time in 100 years that there is Jewish military chaplaincy in Germany.

Over the past week, there has been much ado over the appointment of the first rabbi in the Bundeswehr (the unified armed forces of Germany) since World War II. The appointed rabbi, Zsolt Balla, one of Germany’s most prominent rabbis, stated after his nomination: “It is our goal to make it normal again for Jewish citizens to serve in the German army.” The president of the Central Council of Jews in Germany, Josef Schuster, also added, “The Bundeswehr has nothing in common with the former Wehrmacht, and that is the only reason why it is possible today for us to introduce a federal military rabbi.” Currently, some 300 Jewish soldiers serve in the German military, but they are spread across the armed forces, making the need for a rabbi for the German military seem more like a political statement than a real need of the soldiers. And political statements are the last thing Jews need, in Germany or elsewhere.

Jews have already tried to blend in the German army during World War I. They fought as hard as Christian Germans to serve their fatherland, Germany, and did their best to show that they were loyal Germans. But when the Nazis came to power, it did not help them. Why do they think today will be any different? Just as no one foresaw that only fifteen years after the first war, the Jews would be blamed for all of Germany’s troubles and their participation in the war would be presented as an act of treason against the country for which they fought and died, now, too, no one will thank them when the tide turns, and it always turns.

Politics does not change reality, only actions do. In the case of the Jews, the only action they are required to take is to unite among themselves. This was the action they took that had made them into a nation, this has been the only action that has ever granted them the world’s respect and favor, and their departure from it has been the precursor of every woe they had ever experienced (read more about it in my latest publication The Jewish Choice: Unity or Anti-Semitism, linked at the bottom of the post).

In conclusion, nothing good will come out of political statements like appointing a rabbi to 300 Jews dispersed throughout the German army, and who are probably not even very observant. The only possible outcome is an intensification of the already existing Jew-hatred in the German military. Therefore, in my eyes, this move is pointless and unwise.

About the Author
Michael Laitman is a PhD in Philosophy and Kabbalah. MSc in Medical Bio-Cybernetics. Founder and president of Bnei Baruch Kabbalah Education & Research Institute. Author of over 40 books on spiritual, social and global transformation. His new book, The Jewish Choice: Unity or Anti-Semitism, is available on Amazon: https://www.amazon.com/Jewish-Choice-Anti-Semitism-Historical-anti-Semitism/dp/1671872207/
Comments
Advertisement