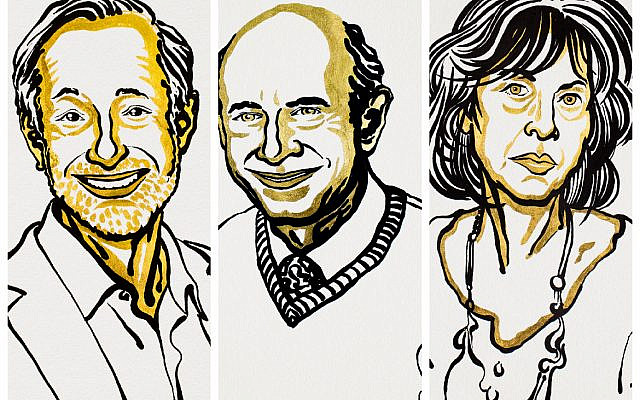 The 2020 Nobel Prizes have been announced. As a proportion of the world’s population – 0.2% – Jews should have won two Nobel prizes over the century they have existed. We have, in fact, won 212 – over 20% of the total – and five more came in this year. Two of the winners, Sir Roger Penrose and Reinhard Genzel (Physics), have left the faith but Louise Gluck, (Literature), Paul Milgrom (Economics) and Harvey Alter (Medicine) are still with us.

The difficulty in studying Nobel Prize winners is to understand what they won the award for. I actually wrote a book on the subject and this year’s contributions are much easier to appreciate than that of, say, Melvin Schwartz and Jack Steinberger, who won the Physics prize in 1988 for “the neutrino beam method and the demonstration of the doublet structure of the leptons through the discovery of the muon neutrino”. Explanation another time.

Sir Roger Penrose had a Hebrew scholar for a grandfather and won his Nobel prize for “discovering a Black Hole formation is a robust production of the general theory of relativity.” The theory of relativity is, of course, the work of the Jewish Albert Einstein. Reinhard Genzel, whose father, Ludwig, was also a distinguished scientist, discovered “a supermassive compact object, compatible with a black hole, at the centre of our galaxy.”

Physicists have been trying to understand Black Holes for many years and it’s no wonder that the Jewish Wolfgang Pauli, who won the prize in 1945, said “The best that most of us can hope to achieve in physics is simply to misunderstand at a deeper level.”

We are particularly good at winning the prize for Medicine – 60 of them –  and Harvey Alter won for great work on the Hepatitis C virus. Like many other Jewish Nobel prize winners, he comes from Russian Jewish migrants to America. There are over 200 laws in the Talmud on medical subjects and we had a massive start on other cultures. Queen Elizabeth I was only one monarch who had Jewish doctors. Hepatitis C has always been a killer and it is estimated that millions of lives will be saved by the work of Harvey Alter.

Louise Gluck is a poet and the last poet Nobel Prize winner was Bob Dylan, who is also Jewish.  Louise Gluck is the Writer in Residence at Yale and her work is quite exceptional.

Which leaves us with Jewish economist Paul Milgrom, who won his prize for advances in game theory and particularly auctions. Now in game theory, you study mathematical models of conflict and cooperation between intelligent, rational decision makers. You create a fictitious situation and then you argue about all the possible outcomes.  One of the areas which can be involved is auctions.

The economics Nobel prize was only started in 1968 and Jews have won 30 of the awards, but again, we had a tremendous start. There are a whole string of rules for economic trading in the Talmud and our ability to trade with each other across the world was one reason why Cromwell wanted us back in Britain.

The scientific careers of Jewish Nobel Prize winners are much easier to gain today than in the past. Many of the earlier Jewish winners were refused admission to medical schools and universities because they were Jewish. Harvard was a culprit and there were quotas for Jewish applicants. The BMA after the war would advertise vacancies, specifying that the  positions were not open to Jews and men of colour.

The successful Jews had one thing in common; they all gave credit to their parents for the tenacity with which they encouraged them to study. Although many came from academic families, like Genzel, a considerable number emerged from poor immigrant families who had struggled to reach more hospitable countries. All emphasised the importance of hard work.

They had one other thing in common. If you go back far enough into their ancestry, they were all from Orthodox families. If they hadn’t been, they wouldn’t have been Jewish. A considerable number may have decided to give up the faith, but if there is any relevance to ancestry – and every family has folk lore about distinguished forebears – they are all in the debt of Jews who for millennia refused to give up the faith, in spite of all the difficulties and dangers involved in keeping to the religion.

Admittedly, it is difficult for scientists; you can’t prove Judaism. You can only believe it and  a  scientist wants his  judgement to be  based on proof. Well, tough; that isn’t the way it works.