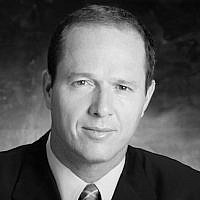 The Blogs
Nir Barkat
Apply for a Blog
Advertisement
Please note that the posts on The Blogs are contributed by third parties. The opinions, facts and any media content in them are presented solely by the authors, and neither The Times of Israel nor its partners assume any responsibility for them. Please contact us in case of abuse. In case of abuse,
Report this post.

Last year, following the Charlie Hebdo and Hyper Cacher attacks in France, I flew to Paris with a professional delegation from the Jerusalem Municipality. We encountered a city reeling from the aftermath of multiple brutal terror attacks. During the visit, I met with Mayor of Paris Anne Hidalgo and we shared best practices for dealing with terror in the streets of our respective cities.

Not even a year has passed and Paris is once again the target of the brutal carnage of evil. In Jerusalem, we are unfortunately intimately familiar with terrorism that indiscriminately targets innocent civilians going about their daily lives. The lives of innocent people in Jerusalem and Paris were cut short simply because they were dining out, praying in houses of worship, attending concerts and sporting events, or running typical errands- the mundane activities that make up the fabric of our everyday lives.

As Mayor Hidalgo and the people of France grapple with the aftermath of this past weekend’s attacks and attempt to comprehend their new reality moving forward, I would like to humbly share five pieces of advice that are based on our own experiences in Jerusalem:

Immediately following terror attacks in Jerusalem, my first instruction to the professional team is to reinstate routine in the city as quickly as possible. We continue with our daily lives. The goal of terrorism is to instill fear and interrupt the activities that comprise our everyday existence. By restoring routine, we demonstrate the resilience of our residents and send a strong message to terrorism and its perpetrators: we will not succumb.

Many terror attacks in Jerusalem have been thwarted or neutralized by alert and responsible residents who took initiative and alerted security forces. Jerusalem is a large city, yet when necessary, we know how to function as an embracing community that takes responsibility for one another. In the face of increasing global terrorism, cities must encourage and instruct residents to be alert and on guard; teach citizens how to act quickly and proactively in the face of threats or attacks to help prevent tragedy.

3. Be good with the good guys and bad with the bad guys.

From our experience in Jerusalem, sharp moral clarity is critical to ensuring the safety and security of our citizens. Make a very clear distinction between residents peacefully going about their day-to-day lives and coexisting alongside the diverse populations in the city and those who aim to wreak havoc and bloodshed. The peaceful residents are our partners in fostering peace and security within the walls of our city and we work closely with community leaders to build bridges for opportunity and advancement. However, those who cause destruction and harm, fomenting hatred and breeding incitement, will be punished with the full force of the law. There is no room for moral obfuscation.

In Jerusalem, we have set a goal of enabling security forces to arrive at any location in the city within two minutes. Mere minutes after an incident is reported, our security teams are already on site. This ability to swiftly and effectively engage with terrorists dramatically decreases the human toll in emergency situations. We also work closely with the Israeli Police and security forces to build an offensive strategy with smart solutions for combating terrorism. As an entrepreneur, I believe in taking full advantage of cutting-edge technology that can provide us with real-time time data that helps us keep our citizens safe. Over the years, our systems have evolved and developed, constantly iterating to adapt to the changing realities on the ground.

5. Terrorism is not just a Paris or Jerusalem problem.

Terrorism in Paris, Jerusalem and around the globe is fueled by the same murderous hatred and extremist ideology that aims to abolish our civilization and our values. The innocent civilians slaughtered by ideological extremists at the Boston Marathon, on the ferry in the Philippines, on the train in Madrid, at the World Trade Center in New York City, on buses in Jerusalem and at the theatre in Paris were all victims of the same blind hatred of the West and our core values of liberty, equality and fraternity. Our fight against terror is a global one and we must stand united in this battle, joining together to target the evil forces that seek to destroy us.

Jerusalemites and Parisians share the same spirit of resilience. We mourn and feel the pain of the families who lost their loved one, care for and support our wounded, stand tall and move forward. This must always be our answer to terrorism for it enables us to emerge victorious.

Our thoughts and prayers are with you, the French nation and the inimitable people of Paris, as you navigate these difficult waters. When we stand united and strong, we are invincible.

About the Author
Nir Barkat is the Mayor of the city of Jerusalem.
Comments