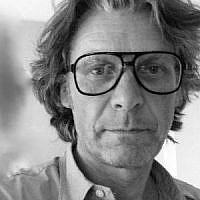 The Blogs
Roger Joyce
Apply for a Blog
Advertisement
Please note that the posts on The Blogs are contributed by third parties. The opinions, facts and any media content in them are presented solely by the authors, and neither The Times of Israel nor its partners assume any responsibility for them. Please contact us in case of abuse. In case of abuse,
Report this post.

For those of you who missed my first post, “here’s what happened last time”: I’m an Australian film producer, making a movie about the Israeli-Palestinian conflict and via this blog, I’m diarising the journey.

Feature film making is not for someone with a sprint mentality. You’ve got  to be more of a long-distance person, maybe the middle distances, as perfected by the Finns, Paavo Nurmi and Lasse Virén. Very little happens overnight and you must steel yourself for that, for it’s probably going to be a long journey and sometimes the nourishment to keep going is hard to come by.

When I was asked to “solve the Middle East problem” in a film screenplay, to come up with a story about the Israeli-Palestinian conflict, I quickly realised that there were a hundred ways I could suggest telling this story (in case you missed the last post, I was the first writer on this project), but I narrowed it down to fourteen. “They say” that there are only seven stories in the world, but I found twice that amount. I wanted this film-making process to be inclusive, I wanted those that were hiring me to feel that they had some sort of say in the story that we were all to tell together. I didn’t just want to run off and appear a few months later with a narrative fait accompli, I wanted to offer them choices.

I pitched them my fourteen ideas, not favouring any of them in particular, although there was one that I dearly wanted to give weight to, to italicise for them, but I didn’t. The idea that I was attached to, had come into my life a couple of years earlier. I was working in a warehouse wondering where my film career was going, listening to podcasts from the BBC to keep me sane; in particular, a programme called Witness. These pocket-sized eleven-minute radio documentaries, focus on events in recent modern history, told through the eyes and words of someone who was there. Amongst the many episodes of Witness I listened to, I learnt about the attack on the Osirack reactor in Iraq from the Israeli F-16 pilot, Lt Col Ze’ev Raz, who led the raid. I also heard a distressing firsthand account of the 1972 attack on Lod airport from a survivor, and of the funeral of President Gamal AbdelNasser via an Egyptian chauffeur. However, the episode that caught my attention was the account of the Oslo Accords, as told by one of the Norwegians who shepherded those historic peace meetings, Mona Juul. I knew of the Oslo Accords, but I had no idea what exactly they were; probably, like most people though, what I did recall was the iconic photograph of Yitzhak Rabin and Yasser Arafat shaking hands on The White House lawn, under the stewardship of the then US President, Bill Clinton.

Listening to this podcast, I thought the story would make a great film, not a documentary, but a narrative feature film: meetings shrouded in secrecy, illegal talks, a Scandinavian city, midnight signings. It was the political thriller stuff of le Carré. This was two years before I was approached to write a film about the conflict and so all I could do at the time, was to file the idea away – as writers do – where it would probably be resigned to the redundant, never-to-surface compartment of my imagination.

Little did I know that just over 24 months later, I had the opportunity to pitch this idea to people who had the wherewithal to commission it as a movie screenplay, and that without favouritism by me, they would actually pick Oslo from that bunch of fourteen ideas.

If I hadn’t thought so already, it felt like the planets were aligning.

About the Author
Roger Joyce grew up in the south of England, coming to Australia in 1987. Carving out a film apprenticeship writing countless short pieces, success came with as a TropFest finalist & award-winner in 1998. Roger has since been commissioned to write five feature screenplays. Roger now has his own film and television production company, billfilms and is producing the feature film OSLO.
Comments