The Blogs
Becca Wertman
Political Aide for Member of Knesset Michal Cotler-Wunsh
Apply for a Blog
Please note that the posts on The Blogs are contributed by third parties. The opinions, facts and any media content in them are presented solely by the authors, and neither The Times of Israel nor its partners assume any responsibility for them. Please contact us in case of abuse. In case of abuse,
Report this post. 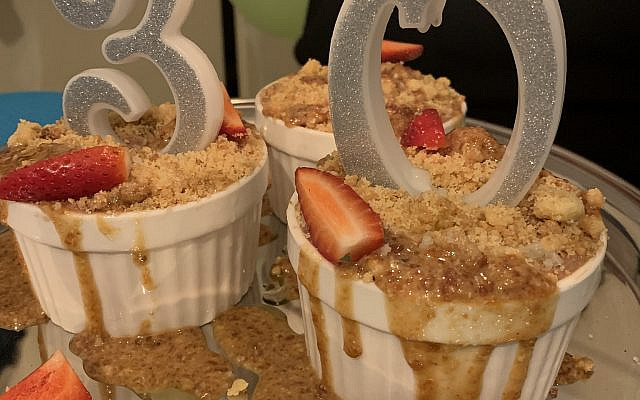 As my 30th birthday was approaching, it became clear that restaurants would not yet be open and my usual preferred way to celebrate – with friends, over good food, wine, and music – was becoming seemingly impossible.

As someone who has lived across the street from Jerusalem’s Machane Yehuda market for the past number of years, I have become a regular at Chef Asaf Granit’s restaurants, particularly his quieter and classier joint, Dekel 3. Lucky for me, one of the chef’s left the hustle and bustle of the restaurant group to venture off on his own, and was willing to create an outstanding private birthday dinner for me and my closest friends – all while abiding by the COVID-19 regulations.

Noam Reuveny, a 28-year-old Israeli chef whose mother was born in Florida, approached my small birthday gathering as if I was an elite client coming to dine in the top restaurant in the city. I simply told him the direction I wanted to go – fish and pasta – and was presented with a draft 7-course menu, with each dish sounding better than the next. 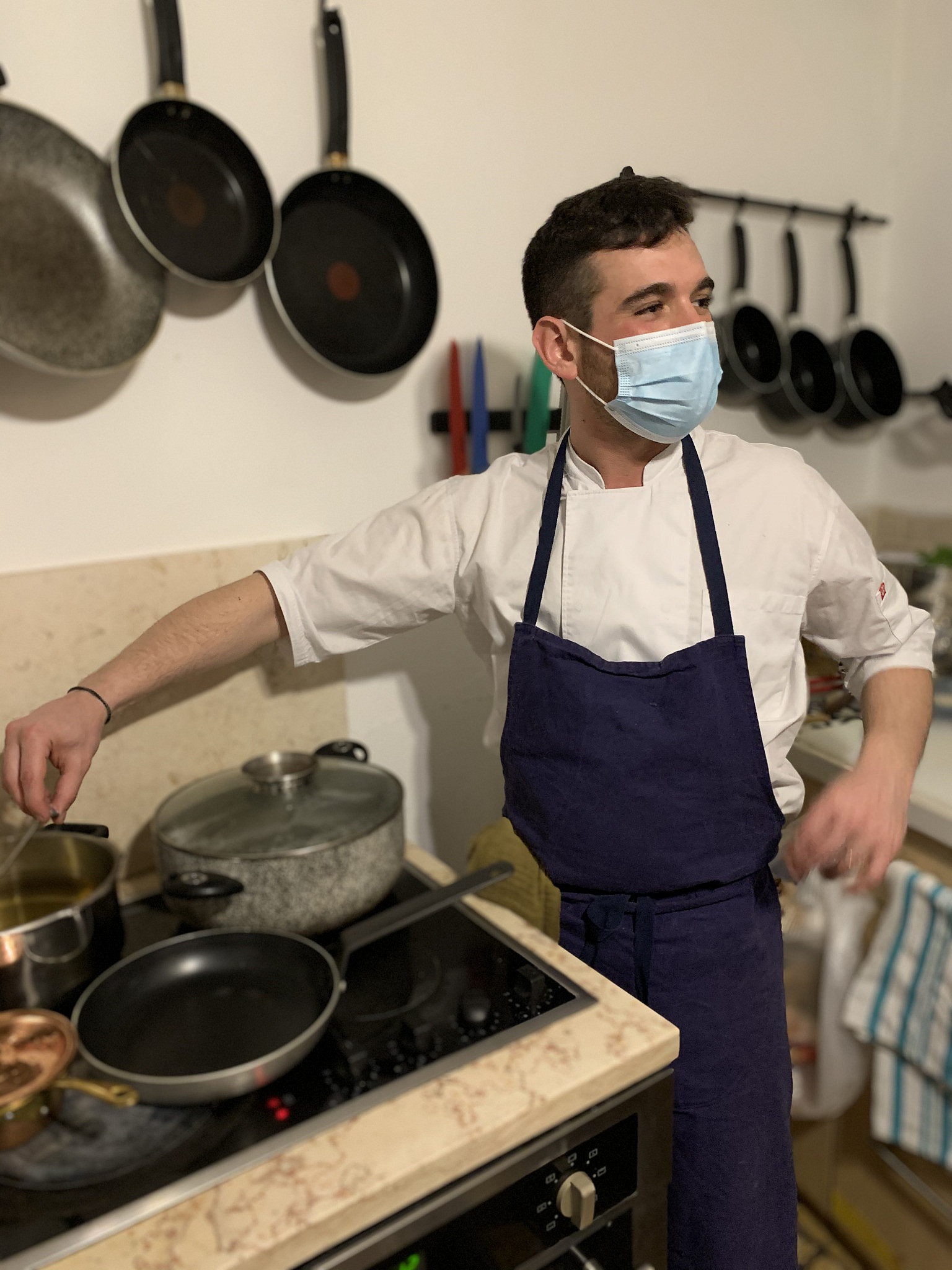 The party was set for 7:30pm, and Chef Noam arrived at 4:00pm, just as he had stated he would, to begin the prep. After schlepping four crates filled with serving dishes, pots and pans, knives, spices, oils, and beyond up the stairs, my Nachlaot kitchen was transformed into a restaurant. Chef Noam had done much of the prep beforehand, including making fresh fettuccini and tortellini, leaving the cooking to be primarily assembly, preparing the proteins, and plating.

At 8:00pm (it is Israel after all and nothing starts on time), following a basil-berry smash cocktail made by my fiancé, we opened a bottle of Bat Shlomo’s rosé and the feast began. Waiting for us on the table was homemade sourdough bread served alongside a series of dips and snacks: garlic confit; olive oil and balsamic vinegar from Modena; herb and sun-dried tomato butter; tahini; a light arugula and red onion salad topped with grated parmesan; paper thin pickled kohlrabi; and a plate of “spicy things,” consisting of roasted jalapeño, fresh jalapeño, tiny fermented Thai chilis from Chef Noam’s garden, and schug. 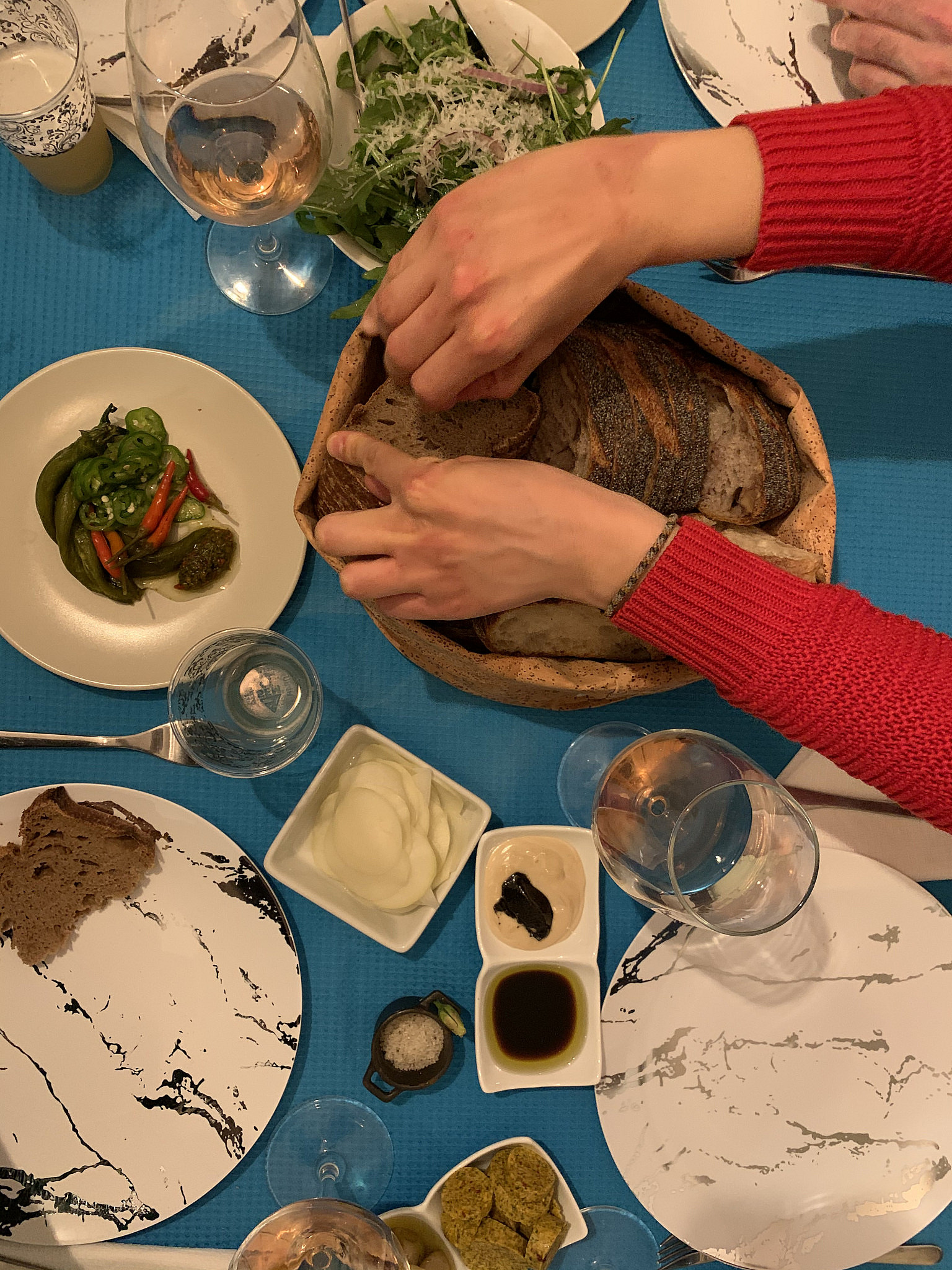 Next, we were presented with an appetizer of salmon tartare seasoned with salt and olive oil, served on top of rainbow quinoa with fresh herbs and grapefruit. The dish was finished with a preserved citrus sauce and topped with crispy bulgur. Then came homemade fettuccini served with crispy kale, salty brinza cheese, lemon zest, and thyme gremolata, served in a white wine butter sauce and finished with kale oil. Both dishes were perfectly balanced and complex. 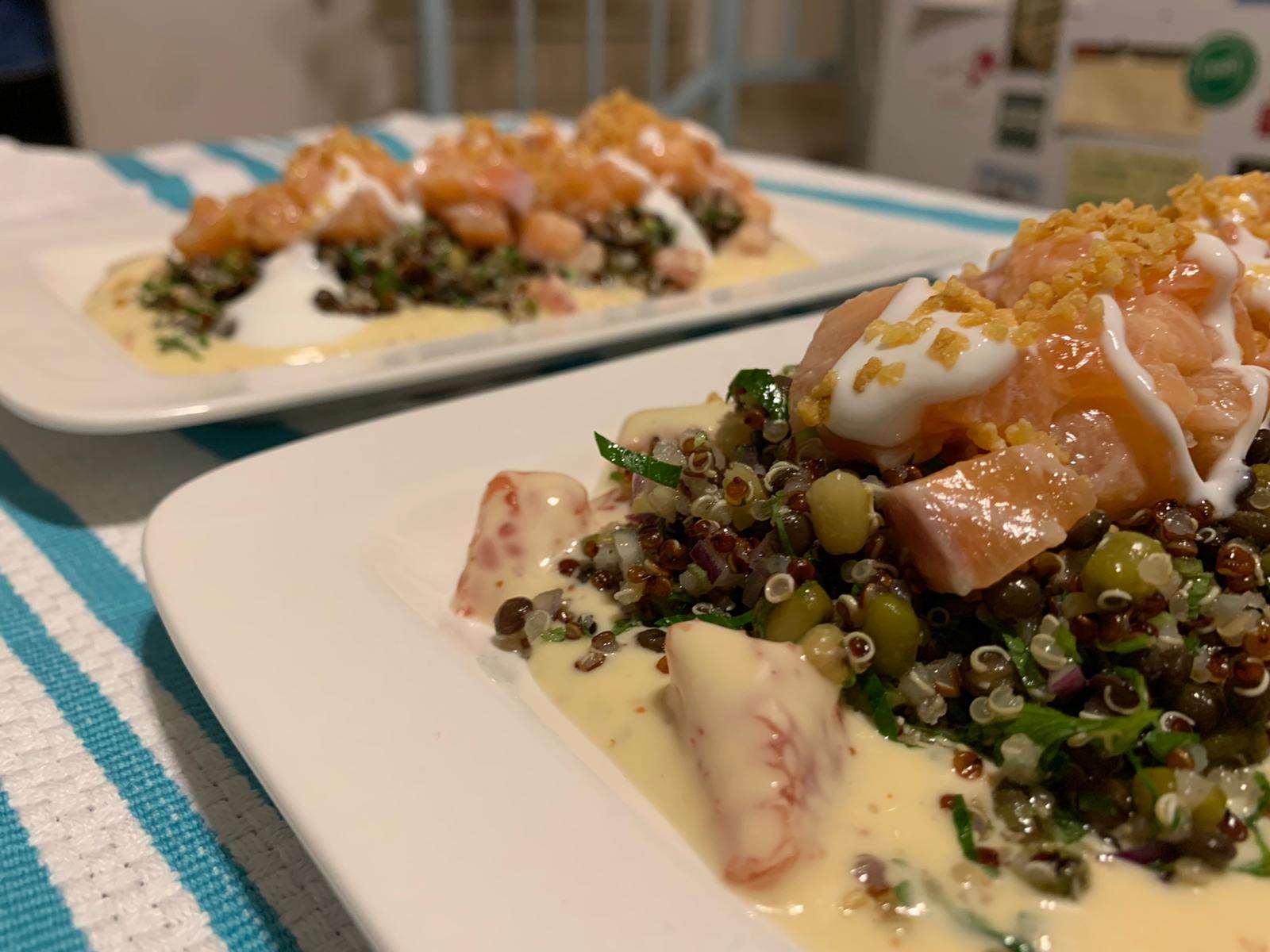 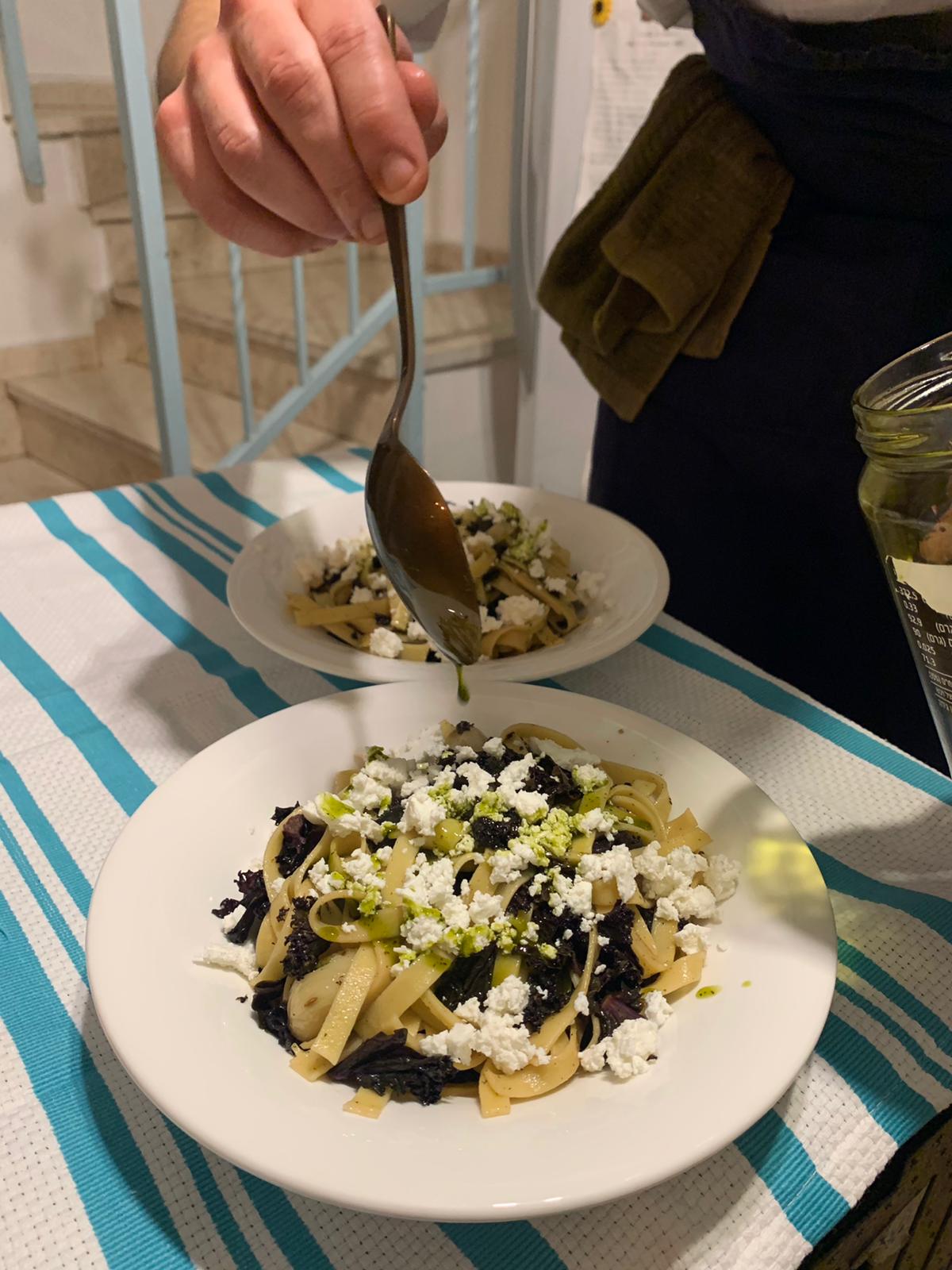 The subsequent course was a work of art, titled “tortellini that are trying to be polenta” – a play on Machneyudah’s famous polenta dish. The plate consisted of homemade duxelles mushroom tortellini served with a sweet corn sauce, sautéed asparagus, and browned butter. We ate them all. 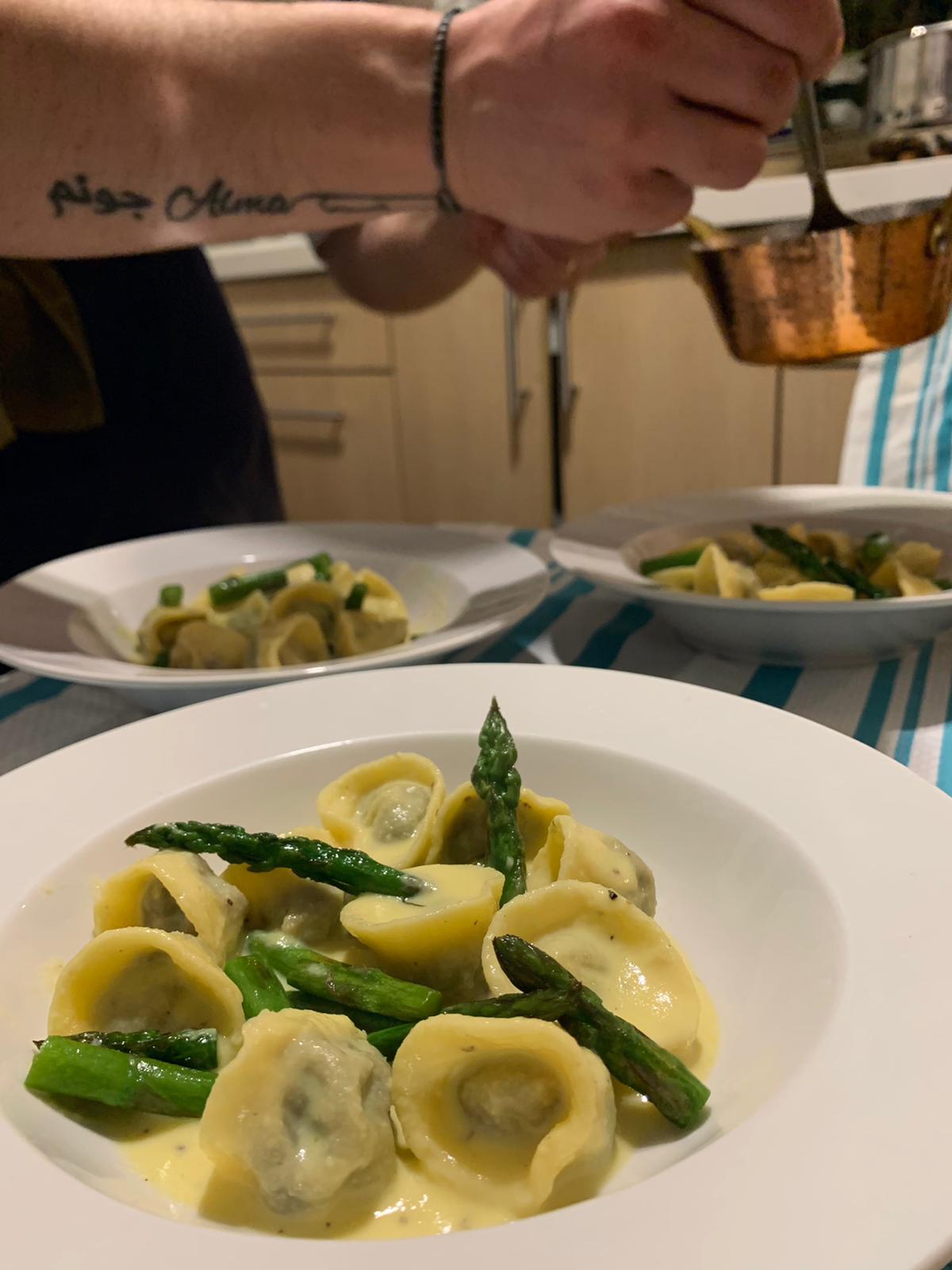 Next came breaded and fried fish steaks served on top of pickled sumac onions and caramelized onions with a side herb salad. The dish was finished with something Chef Noam calls “masadasha” – a twist on the Israeli masabacha warm chickpea hummus but instead made with black lentils and spices. 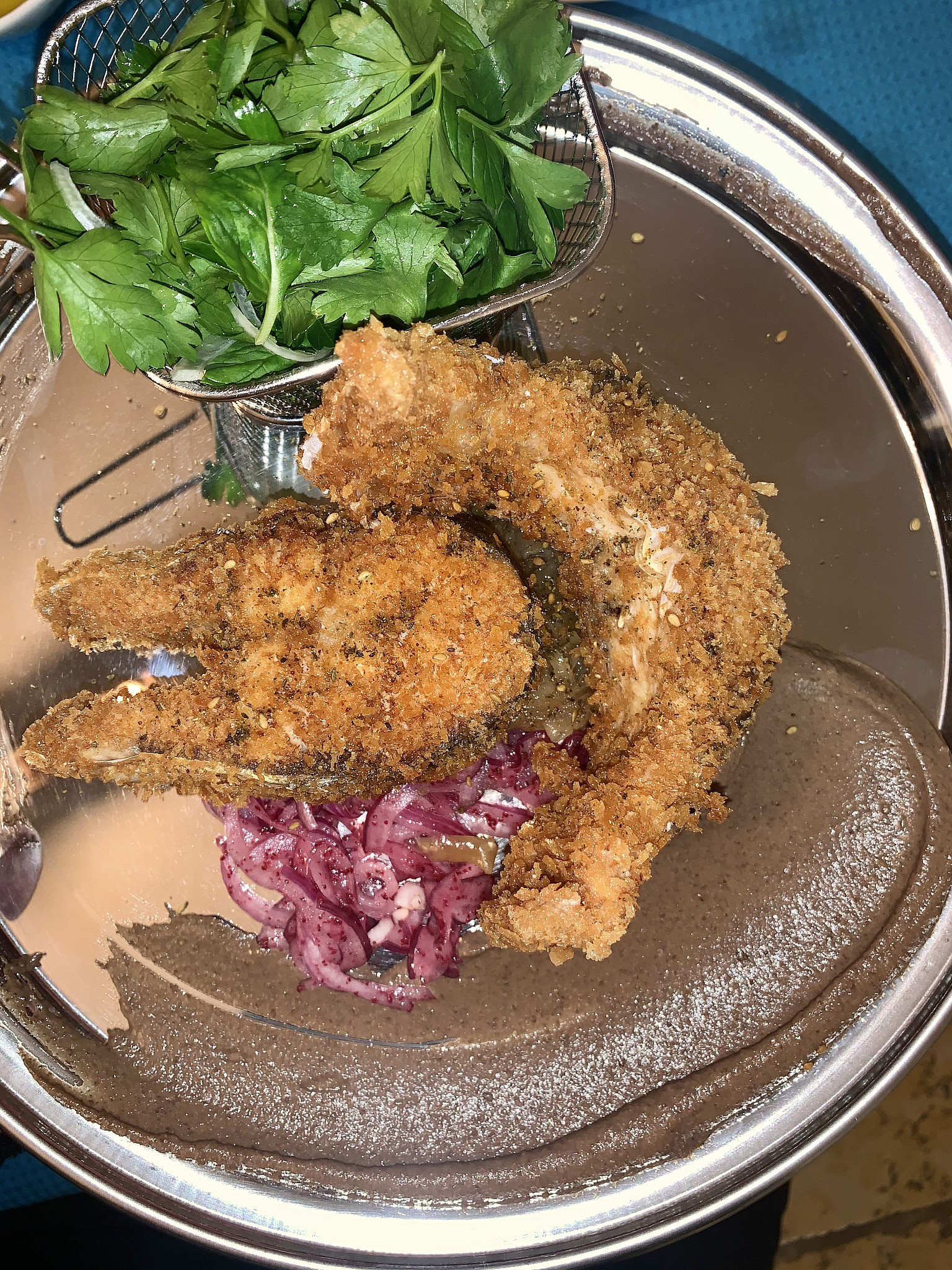 The final course of the meal, before dessert, was fish filet cooked “en papillote” seasoned with thyme, salt, and a squeeze of lemon. It was served over risotto with charcoal grilled tiny pieces of bok-choy, kale, and asparagus weaved throughout. It was a dish that could be on a menu at any fine dining establishment in the world. 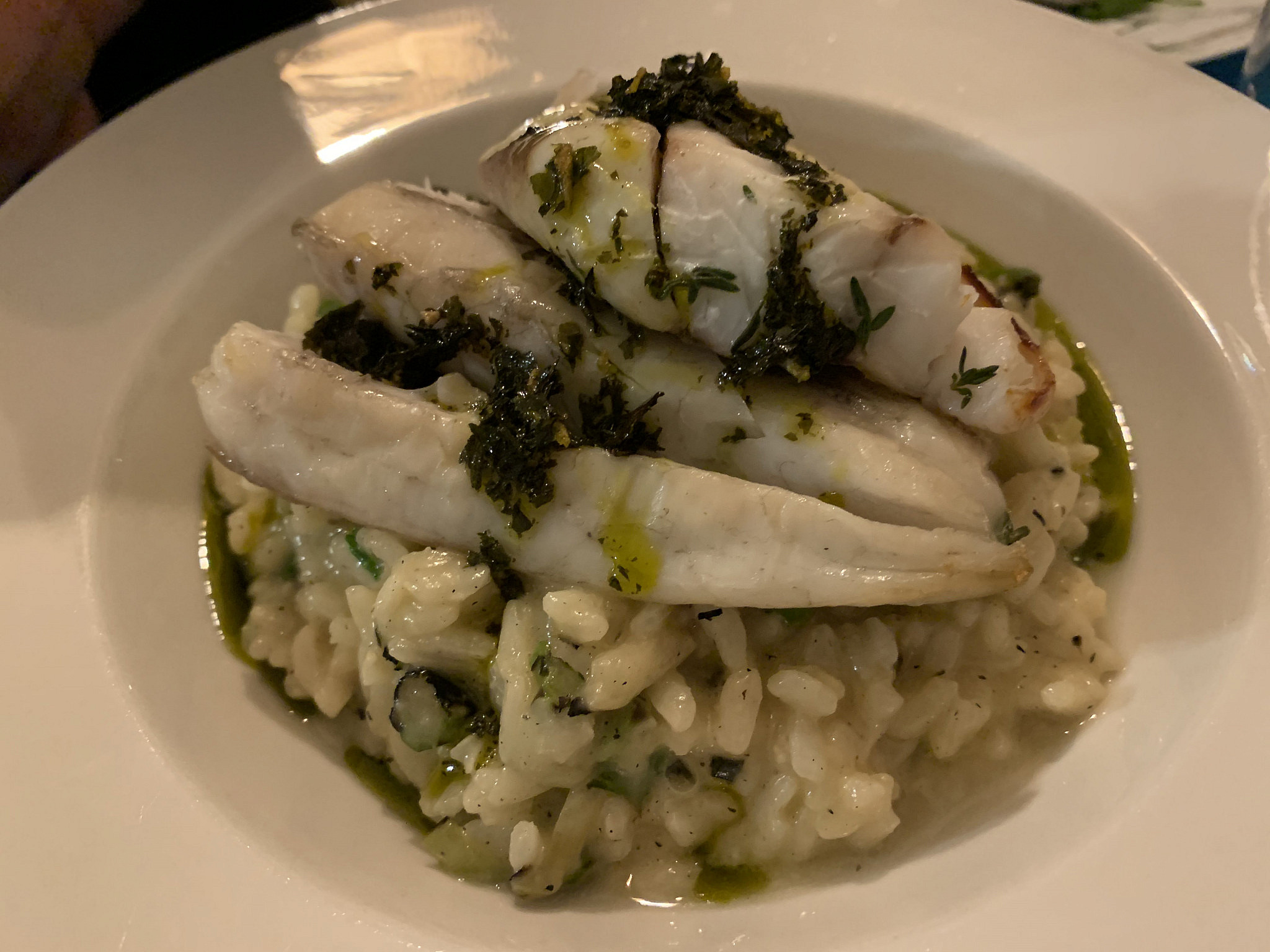 Just when we thought we could not possibly eat anymore, came dessert…and there is always room for dessert. As a chocolate lover, this was the only dish I did not leave entirely up to the chef’s discretion, asking for “some sort of chocolate mousse.” My 30th birthday chocolate mousse, made with Callebaut chocolate, came in individual ramekins and was topped with a nutty praline, streusel, olive oil, salt, and, of course, candles! 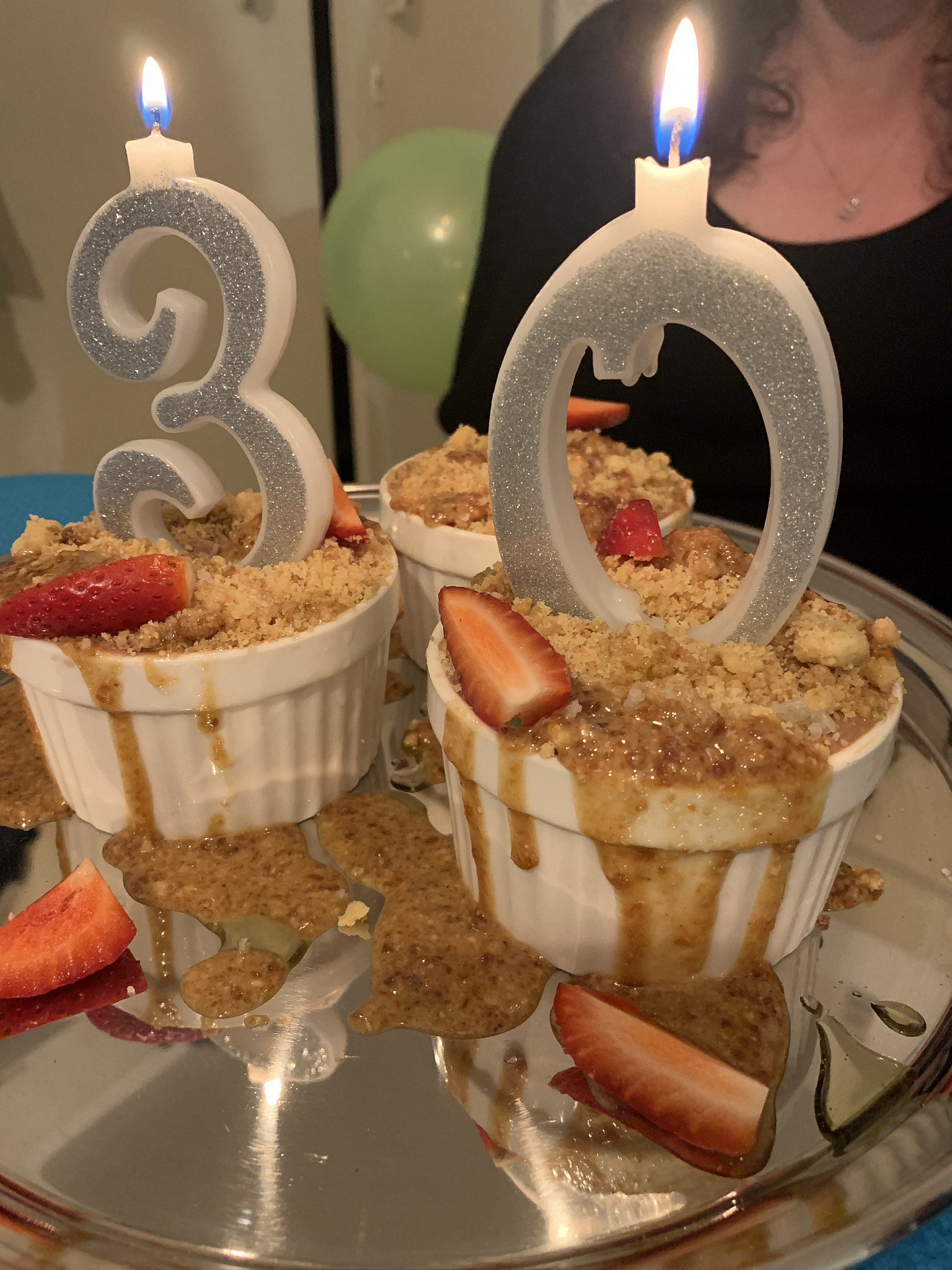 I have been fortunate to dine at many of the best restaurants in Israel – including Bar 51 and Mashya in Tel Aviv, Uri Buri in Akko, and Machneyudah in Jerusalem – and some of the best restaurants in the world, including those with Michelin stars in Paris, and I truly believe that Chef Noam’s meal rivaled those. Looking back, it is impossible for me to choose which dish was my favorite and beyond this, as someone who also loves to cook, the dishes were such a high level that I would not even know where to begin if I wanted to recreate them myself.

While I sincerely hope my favorite restaurants open soon, I encourage all in search of a special meal to consider alternate possibilities, such as a meal literally catered to you – the menu of your dreams, the music of your choice, as much wine as your friends bring, the chef’s undivided attention, and the ability to be as load as you want without worrying about complaints from the table next door.

About the Author
Becca Wertman is Member of Knesset Michal Cotler-Wunsh's Political Aide. She previously served as managing editor and was responsible for the Canada portfolio at NGO Monitor, a Jerusalem-based research institute. Born in Vancouver, Canada, Becca earned her BA in international relations from the University of Southern California and her MA in political science from Columbia University. Her articles have appeared in The Hill Times, The Province, The Georgia Straight, The Post Millennial, The Jerusalem Post, Canadian Jewish News, Algemeiner, and The Tower.
Related Topics
Related Posts
Comments