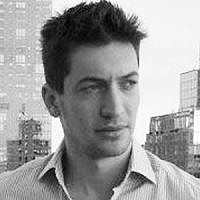 The Blogs
Leor Dimant
Apply for a Blog
Advertisement
Please note that the posts on The Blogs are contributed by third parties. The opinions, facts and any media content in them are presented solely by the authors, and neither The Times of Israel nor its partners assume any responsibility for them. Please contact us in case of abuse. In case of abuse,
Report this post.

I’m a soldier in the paratroopers, for 6 months our job was to protect the border with Gaza – a pretty fun mission but kind of boring for a soldier who trained for over a year and wanted a chance to do something with it. For about 5 months everything was quiet and Israel and Hamas had a ceasefire. This morning, just one month before we had to switch locations and move to the West Bank, our officer called us for a meeting. He told us that the Israeli intelligence found out that Hamas is building a tunnel into Israel in order to carry out a big terror attack and kidnap soldiers from an army base near the border. In that moment, we got an order to go to that base and follow the activity from that house. It’s night time right now and we can actually hear them digging in the ground. We have to watch out in case they suddenly sneak out of the tunnel.

We got an “OK” from our commander and crossed the border in order to blow up the tunnel we’ve been watching. We crossed the border and a few teams surrounded the house. The terrorists were prepared – they blew up the house and managed to escape. In the meantime, we were targeted by rockets that fell right near us. This was the first time that I really felt a sense of fear. We just sat there listening to the rockets explode next to us and wished that nothing would happen to us. Three soldiers from my unit got injured (later on they were treated in the same Israeli hospital with injured Hamas terrorists).

Since we “broke the ceasefire,” Hamas started to fire missiles into Israel. After 8 years of Israeli cities being under attack, Israel started to bomb Hamas and declared war. The mission was to stop Hamas from firing rockets into Israel on our civilians. We had to move to sleep outdoors and during that time, we heard the explosions in Gaza and we were able to see the missiles they fired into Israel – some of them fell just a few kilometers away from us. Every day we were told that we were going into Gaza, but at night we were told that we would have to wait another day. It went on this way for a week. In the meantime, we got donations and letters of support from all over the world. People came to our base to tell us how much they supported us. The feeling they gave us was amazing and also kind of weird at the same time. The scary part for me now is the thought that some of my friends might get injured or die. 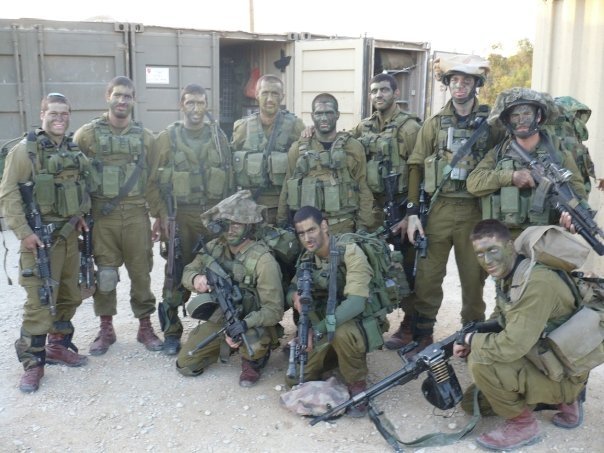 My family flew back to Israel today from Belgium with my brother Ilan who had to go through more cancer treatments. My parents want to visit me but I figured that they don’t need to rush, so I told them to come visit me on Saturday. We will probably have to wait another day before we go into Gaza. Just in case we do go in, I told my mom that I forgot my charger so she shouldn’t worry if I don’t answer my phone in the next week or two. I also told her that she doesn’t need to worry because there is no chance that they will send such a young soldier like me to war.

Saturday morning came and we were told that we were going into Gaza. I texted my brother “God will help us, don’t tell mom.” She has enough to worry about with my other brother who is sick. My mom found out the next day that I’m going in and freaked out, she’s worried that she missed the last chance to see me before I die.

The soldiers all gathered together in the morning, we said a prayer and looked at each other – some people were scared, but honestly I felt great with myself. I feel that I’m taking part in protecting my people. I’m a part of history. I’m the proof that Jewish people can step up and protect themselves. Each one of us wrote a letter to his family in case something happens to us and then we prepared to go in .

We were the first ones to cross the border. I remember when I was a child I watched the movie “Saving Private Ryan” (a war movie from WWII) with a friend of mine and his mom called me telling me that we shouldn’t watch such movies – But damn, this was more than a movie, things were exploding all around us. It seemed like the missiles and rockets from Gaza were fired into Israel right next to us. Before we entered, the army called the Palestinian citizens in Gaza and dropped flyers telling them to leave their houses so that we don’t kill them by accident. As we all know, terrorists are chickens who use civilians in order to protect themselves and to get the world’s support when innocent people die. Warning the citizens risked our lives since Hamas knew when we were coming and where we would be. It makes me so angry that my friends’ lives are at risk in order to protect our enemy.

On our way, a sniper shot at us. We heard the bullets flying near us but we were so tired that some of my friends even fell asleep. Suddenly, an airplane passed by, shot a missile and killed the sniper .

We found weapons and uniforms in the first house we walked into. Everyone around us went to sleep and we dug a hole in the ground at the entrance to the house. I got an order that whoever passed by was probably a terrorist and if I see someone with a weapon I should shoot him. I tried hard not to fall asleep – I was sitting there with my machine gun and suddenly I saw people passing by with guns. I decided to check if they were someone from our troops so I shouted, “IDF”? And someone shouted back “IDF.” Luckily I didn’t shoot them but if I did, the machine gun could’ve killed all of them.From the beginning of this war, I said to myself that the last thing I want is to kill one of my people.

At night, we connected the radio and listened to the news and to music. It may sound weird but it was actually fun, a lot of us started dancing around the house. 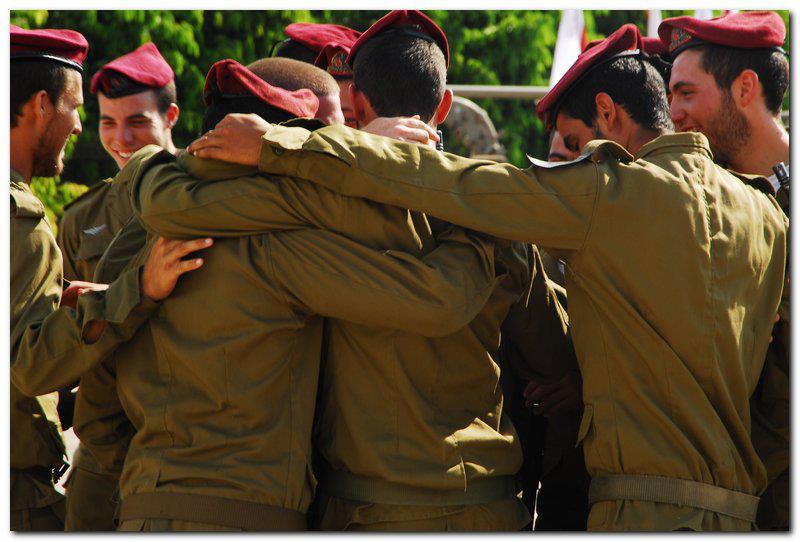 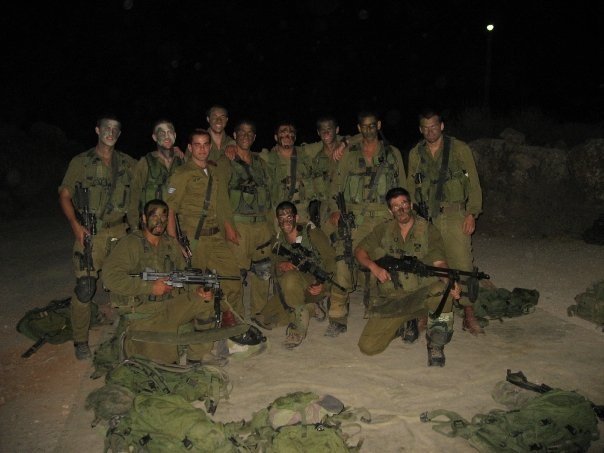 A special team that joined us went to check out a nearby mosque – the mosque was filled with explosions so they ended up blowing it up. A lot of the houses around us are booby trapped, there are bombs all over but the Intelligence knows about almost all of them, plus we have trained dogs with us that are able to sniff out some of the bombs.

We took over an empty house in order to sleep and protect ourselves. We weren’t allowed to use their beds “because we need to stay human and remember that we are at someone’s house״ – we still need to treat them with respect. We sat down earlier, told jokes to each other and suddenly we heard shots and then a soldier screaming for help. Our officer took our medic and immediately started running. The whole time there was a tank following us – one of the soldiers in that tank was actually  a friend of mine from school. That was the first time I realized that, damn, this is real. Everyone was silent and got serious.

My team went on a mission while one other soldier and I had to stay to watch over the house. We broke glass on the stairs so that we could hear if someone tried to sneak in.

The other team had a family living in their house. They put them in a safe room, fed them well and watched over them – you never know, some of them might be from Hamas. There’s no other choice, we need a house to stay in, in order to be safe .

We walked at night and we found tunnels and missiles aiming for Israel from houses in the area – this is proof that they use civilians in order to fire rockets into Israel.

We crossed a street and suddenly a sniper started shooting at us – each one of us ran quickly so that he wouldn’t hit us. One of the soldiers from my team who always has bad luck fell down, his bag was too heavy and he couldn’t get up. Everyone started laughing until someone ran and helped him. He could have died but we thought that it was funny (obviously you never believe that something could happen to us).

This whole war, snipers were shooting at us but we never see who is shooting – they shoot and run away or go into their tunnels. We had an airplane without a pilot the whole time above us that would recognize the shooting and bomb that place.

One soldier in a different unit heard someone knocking on the door to his house, he asked who it was and the guy answered “IDF” with a heavy Arabic accent, the soldier heard the weird accent and a gun loading and shot him. The terrorist was smart enough to give the right password but he wasn’t smart enough to load his gun before he got to the door .

We went on a mission – we needed to take over a few buildings on the beach. We had information that the buildings could be filled with terrorists. We had to use only the soldiers with machine guns, since the range was too far, we fired at the buildings with the help of a helicopter and an army boat. After a while of firing at those buildings we heard a noise – someone fired 2 RPG’s that landed right next to us but didn’t explode and snipers started firing at us. We returned fire – one of my friends took out a missile, fired it to the building and the battle was over . The next day they found around 30 armed bodies in those buildings.

We got back to our old house and in the middle of the night we got a call saying, “Everyone get ready, we need to go back to Israel in 30 minutes.” We were all upset because we wanted to bring back Gilad Shalit – a soldier who was kidnapped and held in Gaza for a few years before the war.

We packed our bags and headed back to Israel. We crossed the border and there were a bunch of TV reporters taking pictures of us. We all gathered in the same location and suddenly a rainbow appeared in the sky.

About the Author
Leor is an elite paratrooper in the IDF with both Israeli and American citizenship. He was injured in Gaza during Operation Cast Lead and is currently traveling.
Comments