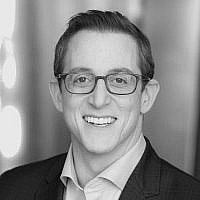 The Blogs
Ari Segal
Apply for a Blog
Advertisement
Please note that the posts on The Blogs are contributed by third parties. The opinions, facts and any media content in them are presented solely by the authors, and neither The Times of Israel nor its partners assume any responsibility for them. Please contact us in case of abuse. In case of abuse,
Report this post.

Several months ago, I met for the first time with a prominent member of the Orthodox community in my office at Shalhevet. (This man was willing to be quoted, but prefers to remain anonymous for the purposes of this discussion.) Our conversation spanned several hours and was at once rich, spirited, and stimulating; but it was also, at times, a little uncomfortable. Neither I nor my guest shied away from discussing some of the delicate and contentious issues facing the Orthodox community, or the issues on which we disagreed. But he and I met in the spirit of dialogue to see whether we might identify some common ground on the matter to maintain the achdus of our increasingly fractured community.

While we weren’t able to solve all of the problems facing Orthodoxy in one sitting, I was heartened by the positive discussion. After this first meeting, he and I had subsequent conversations on the matter — we sought to further our dialogue and refine our arguments. This has yielded a growing friendship that I cherish, and some enjoyable debates and conversations as well.

I want to draw your attention to one critical idea that emerged in the course of our discussions that has given me pause. Honestly, it sent my mind racing on the broader implications of this idea for the larger state of discourse in the Jewish world.

As we spoke about differing religious practices in various communities, many of which list to the left of center, my friend used a word that I believe is crucial in making sure that the entire spectrum of Orthodoxy is on the same page — in concept, if not in practice. The word he used was strategy.

What if we viewed alternate approaches to Orthodoxy not as broad movements or widely applicable hashkafa, but just the strategic position of a particular community to address their specific needs? What if we viewed questions like the matter of women’s’ ordination not as a religious question, but rather a social one?

I have to be honest, I did not initially feel positively about using the term “strategy” in this context. Strategy, at first blush, reeks of opportunism and manipulation. Strategy doesn’t connote authenticity, but rather expediency. The women and men that I know who promote more progressive practices in Orthodoxy are not schemers cheating the system, they are proud Jews who are genuinely striving for an increased connection to Torah and Avodas Hashem.

The more I thought about it, however, the more I understood that the term shouldn’t carry a negative connotation. At the end of the day, all of us in rabbinic leadership and education in the Orthodox world — whether myself, Rabbi Yosef Kanefsky, Rabbanit Chana Henkin, Chabad or anyone else, for that matter — are after the same goal: we want more Jews to feel connected to their Judaism and closer to God. Period. Full stop. And yes, we all employ strategies suited to our communities to achieve that goal. That’s not a bug, but a feature of the modern religious system.

The path towards that goal must look different for different people and different communities. For some shuls, finding opportunities (within a halachic framework, of course) to introduce more inclusion and progressive values, is something that resonates with their constituency. For another community, the very opposite might be true. That community might hold fast to more religiously conservative values. That doesn’t make one community better than the other. It does not make one community frummer than the other. It just makes them different and in need of different strategies to accomplish the same ultimate goal.

The difference between hashkafic Truth and strategic preference is not a new idea, and neither is our tendency to argue over the details. Even before the days when the Baal Shem Tov introduced the revolutionary idea of Chassidus, our people have struggled with pluralist practices in observant Judaism.

But the distinction between hashkafa and strategy is a crucial one that we can easily lose sight of. Once we understand it, we might begin to heal the wounds of division that we as a Jewish people have self-inflicted lately. There’s an anger and paranoia that has taken root in our communities, suspicions of one another that color our interactions.

But why? Why has the tone of the conversation become so vitriolic? We’re all Jews. We’re all trying to do our best, to do what we think is right, to honor the Torah and halacha and to serve Hashem in the best way that we know how. For some reason, we fail to communicate this often enough, to make explicit the end goal of all our strategy and practice. We assume that it’s obvious that MY path exists — Chassidus, progressive, Yeshivish, Modern Orthodox — to reach this destination, while also assuming that other religious strategies are all about the journey instead.

My guess is that a lot of the anger stems from a defensiveness over the Truth. We don’t want to water down our Truth by acquiescing to theirs. We view the issues that divide us as a zero-sum game.

But we don’t have to view it that way — and in fact, we really shouldn’t. The more that we can train ourselves to view the choices made by our brothers and sisters of differing hashkafot as merely a differing strategy, the more we will be able to tolerate them. Remember this, the next time you see someone approaching their path to Hashem in a way that rubs you wrong; their destination is not tangential, not parallel, not related — it is the exact same as yours.

If we recognize this and take it to heart, the hope is that we will eventually do more than simply tolerate them as non-threatening alternatives to our own life-choices. We will actually grow to respect them as authentic approaches to dveykut ba’Hashem — even if it isn’t our own.