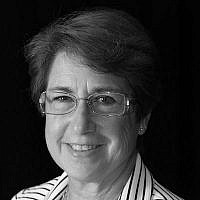 The Blogs
Frieda Unger Rosenberg
Apply for a Blog
Advertisement
Please note that the posts on The Blogs are contributed by third parties. The opinions, facts and any media content in them are presented solely by the authors, and neither The Times of Israel nor its partners assume any responsibility for them. Please contact us in case of abuse. In case of abuse,
Report this post.

I don’t usually share personal topics and reflections that bring tears to my eyes as I write or review. I usually keep things like that very private. However, I thought perhaps my story might assist some others who find themselves needing to make the same or a similar decision at a time when life’s moments converge.

My mother, Alyce Unger, passed away in 2004. Mom never had an aliyah – it wasn’t done back when I grew up in a Long Beach, New York Conservative  synagogue. A woman wasn’t given the honor of an aliyah in our shul. As time went on in that synagogue, women opened the ark – usually with family members alongside her.

That was the way it was I guess in most Conservative  synagogues in the late 1950’s-1970’s. Even though in 1955 the Committee on Jewish Law and Standards of the Conservative Movement permitted women to be called up for an aliyah it was only followed in several synagogues around Minneapolis.

I am not exactly certain when women were given an aliyah in my shul, but it did take a long time and great heated discussion even after others started.

And so, that is what I continued to follow as a young woman, young wife, young mother when asked if I wanted an aliyah – I opted for opening the ark, which I considered an honor. Now I am 67. This has been on my mind for 16 years since Mom passed away.  She certainly was someone who should have been honored by an aliyah. Quite honestly – I don’t know if she would have been comfortable with one as Mom was traditional in some ways and very progressive and open to new things in other ways. It will always be an unanswered question.

And so, I find the decision mine. Guided by my heart.

My Conservative synagogue in Merrick, New York has offered the honor of an aliyah to women for many years. I have declined the honor, always asking respectfully for an honor of opening the ark curtains instead – until one day in February.Why was that day so different from the 54 years since my Friday evening Bat Mitzvah? Why, when the young Rabbi asked me if I would like an aliyah during the Shacharit service did I answer “yes, thank you.”

When Mom passed away – it was and still is and always will be – a terrible loss in my heart. I miss terribly not being able to do things for her and with her – from the simple to the sublime. Sharing an after-school snack at the counter together, weeding the curb together, making her and daddy’s bed when she was preparing breakfast downstairs in the kitchen, polishing the Shabbat candle sticks, planting a garden to surprise her, buying something special she admired, walking to shul every Rosh Hashanah and Yom Kippur with her (a little after the men left), cooking and baking for the holidays, sharing Hadassah stories (she always asked me after I told her about a speech I had made – “Were you brilliant?”) special small trips with her and my children – I can go on and on.

February 24th was the 36th anniversary of my grandmother Gertrude Mandel’s yahrzeit. Double chai. Gram is Mom’s mother. The evening of February 23rd my husband Alex and I went to evening minyan and on the 24th we went to morning minyan.

Our young Assistant Rabbi approached my husband Alex and asked if he was commemorating a yahrzeit. “No”, he said, “Frieda is.” The Rabbi turned to me and asked if I would like an aliyah.  Now, remember, I have always said no. But I always felt very awkward to say that as I have heard you are not to decline an aliyah – but I figured my opening the ark was the honor I accepted, and no disrespect intended. Over time I joined the congregational aliyah when my Rabbi called up people who like the Yankees during Simchat Torah’s Torah reading, but it wasn’t the same as an individual aliyah for me.

So – Ma Nishtanah Hayom Hazeh…? Why was that day, that moment in time, different from all other days for me? Because – when Mom passed away, 16 years ago, I decided then that when I made her a great-grandmother, I would honor her by having an aliyah. This last September, my daughter and son-in-law gave us a wonderful grandson whose Hebrew name has both my Mom’s and Gram’s name.  An aliyah was something I felt I wanted to give to her and something I could give to her.

An aliyah, the young Rabbi told me when he approached me after the service, raises up the person who had the aliyah and it would raise up my grandmother as well whose yahrzeit it was.

I was very moved by his words. I knew I had somehow connected my heartfelt desire to give my mother a great-grandchild and to honor my grandmother. My first aliyah at 67 was a bitter sweet moment for me. Bitter because I so wanted Mom to meet my grandchildren. Sweet – because it was a moment in time that  made this amazing connection between five generations in my family in a very Jewish, meaningful way. I pray to have many more aliyot, G-d willing, and I know I will always make this connection in my mind and in my heart when I say the words of the blessings. But that morning was a moment in time for me, in my Judaism that lifted us up in a very meaningful and important way.  We had an aliyah, Mom.

About the Author
Frieda Unger Rosenberg is currently a member of Hadassah’s National Board, a National Portfolio Council Officer and formerly National Vice President, after 44 years of service to the world’s largest women’s Zionist organization. Past President of the Nassau Region, of the Merrick-Bellmore Pnina Chapter, of the Dayan Lilah young leaders’ group and of Long Beach Jr. Hadassah, Rosenberg is part of a four-generation Hadassah Life Member Family, a four-generation Hadassah Associate Family, and a three generation Hadassah President Family which includes her grandmother, her mother and her sister. Rosenberg graduated from the University of Connecticut magna cum laude, Phi Beta Kappa. After receiving her law degree from Hofstra University School of Law, she practiced admiralty law with Burlingham, Underwood and Lord in New York City.
Comments