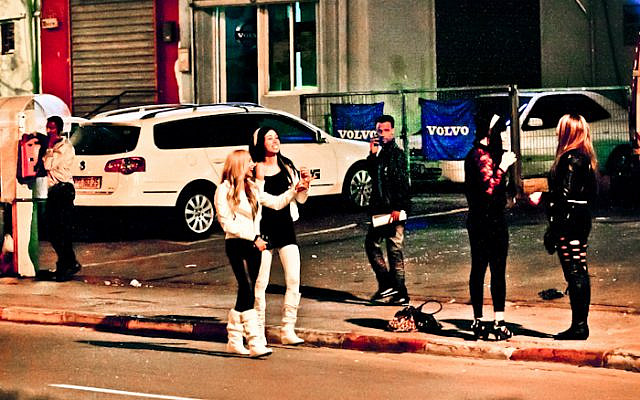 During the past twelve months, I interviewed people in Shapira to see how they wound up there and what they think of the things happening in the are. Here’s what one of the neighbourhood’s ladyboy prostitutes had to say.

I’ve been doing this work for a year – it’s bad. It’s really bad. I’m worth more than this. I’ve been [a ladyboy] since I was born, I’m not a man but I’m also not a woman. I don’t know what I am. I was born like this. I always dreamt that I wouldn’t be a man or a woman but I wanted a pussy.

Not a dick, I didn’t want a dick. Now I have a dick But I don’t want a dick, so I….wait there’s a guy stopping in his car….Ok it’s nothing. So anyway, my plan is to save a lot and then do an operation. Then I will have a pussy. It will be the same as now but without a dick.

There is no one sort of person that comes to see me. I don’t know. It depends, it changes. There are some people that, say, want a girl with a dick. There are some that want a guy – like me – that is a ‘guy’ but also a ‘girl,’ do you know what I mean? You can say that a lot of people want someone like me because I can fuck them but ‘I’m not a girl.’ There’s some that want a dick, some that want a pussy, it doesn’t matter to me. I want, I don’t know. I want to live my life. I’ve come here for a long time, I just want to leave and do the things I want. That’s it.

It doesn’t matter to me what a person is, Jewish, Arab or whatever. I only prefer to not see young people. Young people that are twenty or twenty-five, around the same age as me. Because I need to make a separation between work and my life. I’m 21 and, say I see someone my age, it can be fun and maybe something can happen. I want that to be separate from work.

Shapira is a great neighbourhood. If you behave well, you get respect and if you aren’t respectful you don’t get respect. Listen, there are bad Arabs, there are bad Jews, right? So, there are good Sudanese and bad Sudanese. I have lots of Sudanese friends, it’s not a problem. Would I go with one of them for work? Why not? Say a white guy came now….where are you from? England. OK, say a guy comes now, a son of a bitch from England, I should go with him? No! I’ll go to a Sudanese guy that speaks nicely to me and I’ll go with him. If you aren’t respectful to me, I’m not going to fuck you.

A pimp? Come on, no I don’t have a pimp. We [ladyboys] don’t have pimps. If someone tried to pimp us, I’d throw a shoe at his head. We’re not like that.

Of course, I want to do a different job. I want to study hairdressing, first of all, and then I want to do psychology but, to do that, I need money. I did have a lot of money but I bought a car, some clothes and a moped. But it’s ok, I’m still at a young age so I can figure out what I want to study exactly and make some money in the next year or two.

I was fifteen when I left home. I told my parents. I told them when I was twelve that I’m like this. I don’t speak to them, I don’t want to and they don’t want to. I haven’t seen them in six-and-a-half years. It’s not sad from my point of view. It’s sad because it’s your family and you need family. And it’s not sad because it’s a family that’s not for me. It’s not my real family because they don’t accept me. I don’t want a family like that. If it’s a family like that, I don’t want it. A family that builds but doesn’t accept, do you know what I mean? They build up, mum, dad, son, daughter, grandma, grandpa, cousins. But they don’t accept you.