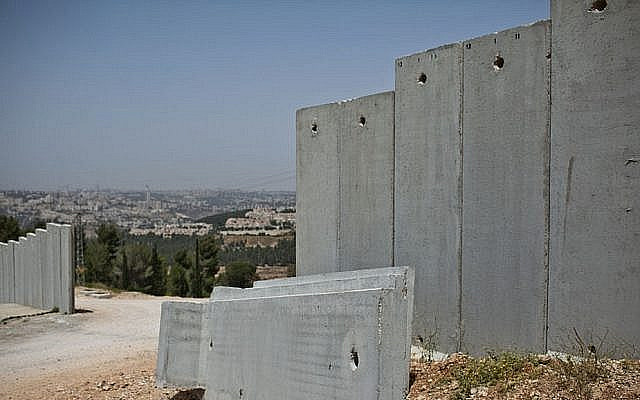 A portion of the security barrier, which largely separates the West Bank from Israel, under construction near Jerusalem. (Noam Moskowitz/Flash90)

Most of the world and half of Israelis think the West Bank occupation is a disaster. But almost no one thinks ending it in an agreement with the Palestinians is possible. What to do?

To Israelis, the issue often feels ignorable, but every so often it raises its unappealing head. Last week, Ben & Jerry’s ice cream decided to discontinue its Israel concession unless the holder denies distribution to West Bank settlements (which would violate a problematic Israeli law).

The uproar this sparked prompted me to write of the absurdities at play (simply put: the West Bank is no more in Israel than Kurdistan is, under Israel’s own law). Numerous readers challenged me to propose a better way. Taking up this challenge is to tread where giants have stumbled. But I will try.

To begin with, a few assumptions:

To exit the paralysis, Israel could resume willingness to engage in talks toward a final settlement, as attempted by prime ministers Ehud Barak and Ehud Olmert. But it would be wise to also deny the Palestinians the ability to block change through maximalist negotiating positions, and instead proceed with moves both unilateral and generous aimed at improving the lot of individual Palestinians, nudging them collectively toward independence, and defanging the demographic concerns bedeviling Israel itself.

GAZA: It currently poses no demographic threat, which sets it apart from the West Bank, but the situation there is morally indefensible. Gaza would need to be contained for now and appended to Palestine whenever Hamas is dislodged –  whether by coercion, persuasion, intervention or revolution.

JERUSALEM: In theory, Israel can keep things as they are, but this is a festering sore that prevents accommodation not only with Palestinians but across the region. I have proposed Vaticanization of the Old City; objections focused not on principle but practicality: Israelis would not support it and some would go berserk. A halfway option would not undo the annexation but merely invite key Muslim players to actively help run it in some new custodial arrangement.

If Israel took these initiatives publicly and spectacularly, it would immediately be embraced by the US, EU and much of the Arab world; the world is fed up with this conflict and tired of forever negotiations (the process variant of forever wars). The pressure on the Palestinians not to play games would be considerable.

Some will say all this is unaffordable since it requires $100 billion in compensation alone. My answer is that Israel’s annual GDP is $400 billion, and that the world (including the Arab world and the United States and the EU) will help, and that even inflationary printing of money is better than national destruction. Remember that the world has spent trillions fighting COVID-19; what must happen, happens.

This path will not please everyone and I am not proposing that this will make all further Palestinian demands go away.

It may, however, be the least bad option.