Every few weeks in Krakow I experience another part of a miracle, the miracle of the rebirth of Jewish life in Poland. It manifests in different stories, some about young women who over the last ten years since they uncovered their secret have slowly returned to observant Judaism. Others are just taking their first steps into the Jewish world having heard the news of their heritage only recently. Sometimes the young individual walks into the Jewish Community Center of Krakow and asks to speak to the rabbi; other times they are much more shy, and only by chance do we find each other. Last week I had such a chance encounter. 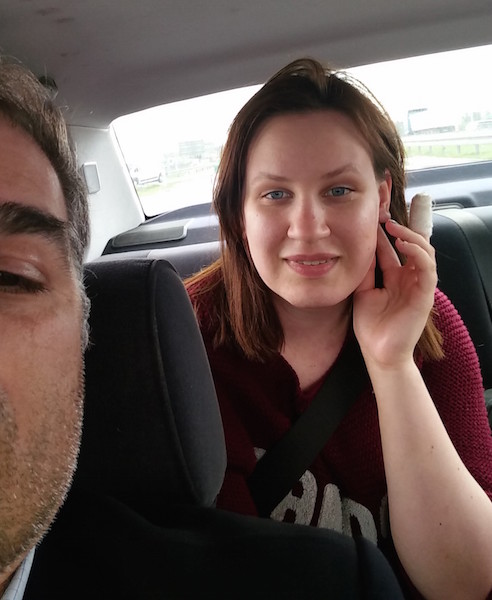 Agnieszka Z was sitting behind me in the backseat of the car as we were making our way from Krakow to the Katowice airport. I had been offered a lift from one of the young members of the Jewish community who sometimes appeared at my services and classes. His flatmate, a young Polish woman introduced herself as Agnieszka and told me we had met over a year before at a Hanukka party at the JCC. Since then she had not returned, hadn’t felt so comfortable identifying herself as Jewish. Now, by coincidence, both of us were heading to Israel for a week. For  Agnieszka, it would be her first time there.

That is because only two years ago when she was 19, her grandmother invited her to her home for a chat. Thinking nothing unusual, Agnieszka had no idea that the next words she heard would change her life forever:

“My child, I want you to know that we are Jewish. My mother was Jewish and her mother before her; I never told anyone n 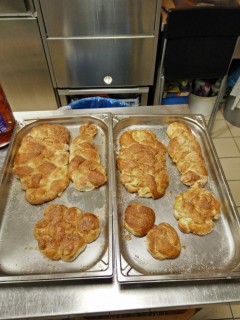 ot even my husband, your grandfather. It is a secret I have kept with me all these years. Even though I was only seven when I was taken away from my parents I still remember the Shabbat candles in our home in Nowy Sacz. I want to teach you how to bake challah because if you want to have a good husband you have to learn this…”

For nineteen years Agnieszka was a Catholic Pole, no Jewish roots, no connection to her past. One moment changed it all; yet it was hard for her to process, to digest all that she just heard. Her grandmother was weak but very clear yet Agnieszka couldn’t believe it. Two days later she came back to her grandmother’s house to verify this information and she learned more.

Her grandmother, Kristina, confirmed that she was indeed Jewish and explained that seventy years earlier her father’s parting words were, ‘don’t ever tell anyone you are Jewish!’ So why was she telling her now? The Nazis were defeated by the Communists who then persecuted Jews in their own way. Jews were singled out, denigrated and sometimes expelled from Poland. Kristina decided to keep quiet and wait. Finally in 1989, Solidarity! A free Poland but the anti-Jewish sentiment still lingered. After many years of assurance that ‘the coast was clear’ she was finally ready to reveal the truth to her two granddaughters.

Unfortunately for Agnieszka, despite an intense desire to learn more about Shabbat candles and what this special challah was that she remembered always seeing in her grandmother’s home (often with some honey), her time ran out—a week after their meeting Kristina passed away.

At the funeral she met her Grandmother’s brother who elaborated more on the story; he remembered the first day Kristina came to their home in a little village near Warsaw. Kristina’s parents lived in Nowy Sacz before the war but in 1939 her great grandfather saw the writing on the wall. He knew that darkness was descending on all Polish Jews and realized that of his two daughters only one looked Jewish. Agnieszka’s grandmother had a dark complexion and was in danger, so he sent his seven year old girl away to a village near Warsaw to his close non-Jewish friend in a plea to take her in—to save her life. They had many children but still took the young girl in but she would have to convert and live as a Christian, the family was very religious. After the war they found out that the father was killed in Treblinka, her other relatives are still a mystery.

From the tender age of seven Kristina lived as a Christian and at eighteen she married a nice Polish man, and they lived together in Poznan. She never told her husband she was Jewish. Kristina had several children and her daughter had two daughters, Agnieszka who is sitting behind me in the car and her fifteen year old sister who still doesn’t know of her Jewish roots. 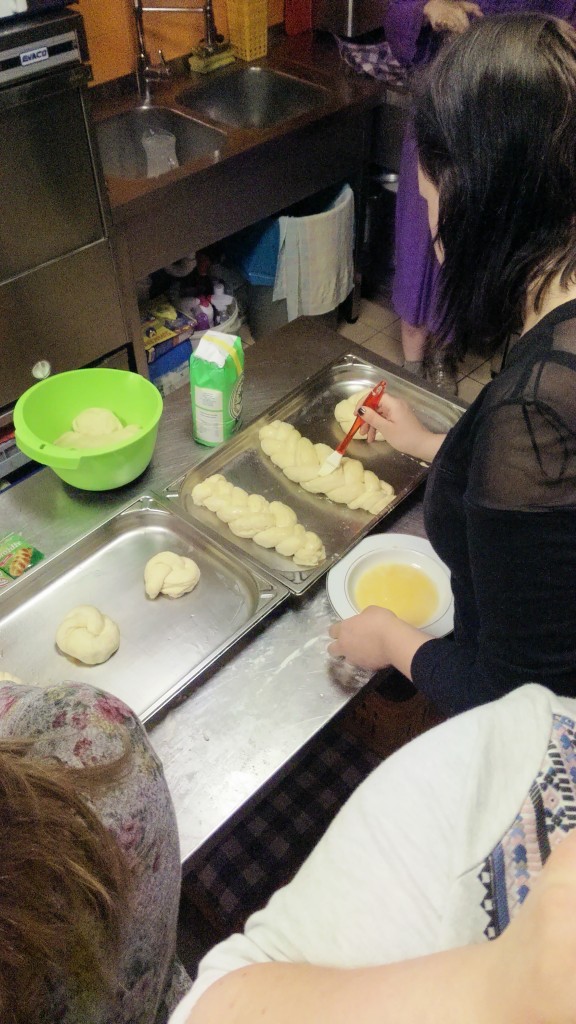 Before we arrived at the airport we made some decisions: We decided that when we came back from Israel to Krakow we would get together at the JCC and I would teach her to bake challah! I pressed for more but she was nervous. I told her that she had the chance to right an historical wrong. She understood and hesitantly accepted my request to put a mezuzah on her door.

After the week, I met Agnieszka on the plane and she summed up her feelings she had on her first trip to Israel with one delightful statement: I think I want to make aliyah!

“When I went to the wailing wall I started shaking I prayed for the first time in my life. I was crying and I remembered my grandmother and a strange song she would sing in Polish. It was about Jerusalem…” 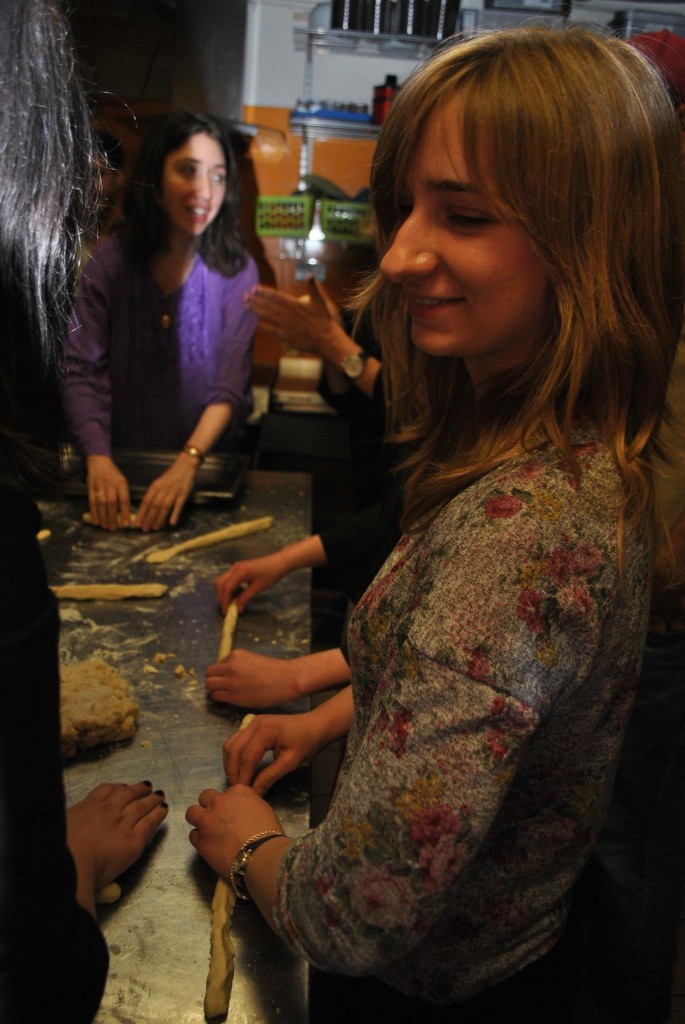 itial meeting I have called Agnieszka and invited her to her first Shabbat meal at the JCC in Krakow. She is still hesitant but interested in learning more, even expressing interest in learning Hebrew. Last week we joined together one evening at the JCC and learned how to bake challah, as promised. Agnieszka was very excited and I watched as she made the blessing for taking challah, eating bread for the first time… So many firsts…

The Gimel student club of the Jewish Community Center of Krakow hosted the event and 15 people showed up, half of them are new to Judaism, having found out in the last few years that they were indeed Jewish. What a remarkable experience!

I hope to continue to help Agnieszka discover her Jewish story and explore Jewish identity together with all the Jews of Krakow who are engaging in the revival of Jewish life in the most unlikely of places in the world! 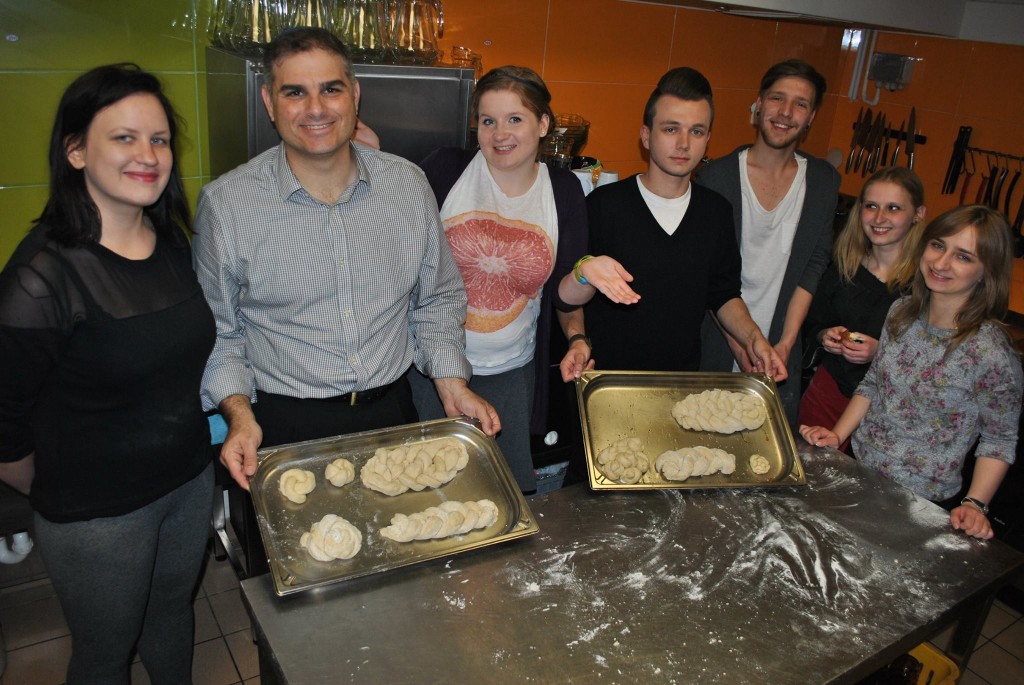