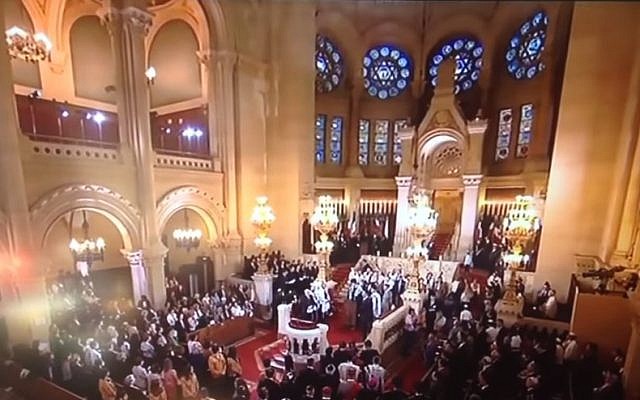 The parsha of Terumah describes the construction of the Tabernacle, the first collective house of worship in the history of Israel. The first but not the last; it was eventually succeeded by the Temple in Jerusalem. I want to focus on one moment in Jewish history which represents Jewish spirituality at its lowest ebb and highest flight: the moment the Temple was destroyed.

It is hard to understand the depth of the crisis into which the destruction of the First Temple plunged the Jewish people. Their very existence was predicated on a relationship with God symbolised by the worship that took place daily in Jerusalem. With the Babylonian conquest in 586 BCE, Jews lost not only their land and sovereignty. In losing the Temple, it was as if they had lost hope itself. For their hope lay in God, and how could they turn to God if the very place where they served Him was in ruins? One document has left a vivid record of the mood of Jews at that time, one of the most famous of the psalms:

By the waters of Babylon we sat and wept as we remembered Zion…How can we sing the songs of the Lord in a strange land? (Psalm 137)

It was then that an answer began to take shape. The Temple no longer stood, but its memory remained, and this memory was strong enough to bring Jews together in collective worship. In exile, in Babylon, Jews began to gather to expound Torah, articulate a collective hope of return, and recall the Temple and its service.

The prophet Ezekiel was one of those who shaped a vision of return and restoration, and it is to him we owe the first oblique reference to a radically new institution that eventually became known as the Beit Knesset, the synagogue: “This is what the sovereign Lord says: although I sent them far away among the nations and scattered them among the countries, yet I have become to them a small Sanctuary [Mikdash me’at] in the countries where they have gone” (Ezekiel 11:16). The central Sanctuary had been destroyed, but a small echo, a miniature, remained.

The synagogue is one of the most remarkable examples of an itaruta de’letata, “an awakening from below.” It came into being not through words spoken by God to Israel, but by words spoken by Israel to God. There is no synagogue in Tanach, no command to build local houses of prayer. On the contrary, insofar as the Torah speaks of a “house of God” it refers to a central Sanctuary, a collective focus for the worship of the people as a whole.

We tend to forget how profound the concept of a synagogue was. Professor M. Stern has written that “in establishing the synagogue, Judaism created one of the greatest revolutions in the history of religion and society, for the synagogue was an entirely new environment for divine service, of a type unknown anywhere before.” It became, according to Salo Baron, the institution through which the exilic community “completely shifted the emphasis from the place of worship, the Sanctuary, to the gathering of worshippers, the congregation, assembled at any time and any place in God’s wide world.” The synagogue became Jerusalem in exile, the home of the Jewish heart. It is the ultimate expression of monotheism – that wherever we gather to turn our hearts towards heaven, there the Divine Presence can be found, for God is everywhere.

Where did it come from, this world-changing idea? It did not come from the Temple, but rather from the much earlier institution described in this week’s parsha: the Tabernacle. Its essence was that it was portable, made up of beams and hangings that could be dismantled and carried by the Levites as the Israelites journeyed through the wilderness. The Tabernacle, a temporary structure, turned out to have permanent influence, whereas the Temple, intended to be permanent, proved to be temporary – until, as we pray daily, it is rebuilt.

More significant than the physical structure of the Tabernacle was its metaphysical structure. The very idea that one can build a home for God seems absurd. It was all too easy to understand the concept of sacred space in a polytheistic worldview. The gods were half-human. They had places where they could be encountered. Monotheism tore this idea up at its roots, nowhere more eloquently than in Psalm 139:

Where can I go from Your Spirit?

Hence the question asked by Israel’s wisest King, Solomon: “But will God really dwell on earth? The heavens, even the highest heaven, cannot contain You. How much less this temple I have built!” (I Kings 8:27).

The same question is posed in the name of God by one of Israel’s greatest prophets, Isaiah:

Heaven is My throne,
and the earth is My footstool.
Where is the house you will build for Me?
Where will My resting place be? (Isaiah 66:1)

The very concept of making a home in finite space for an infinite presence seems a contradiction in terms. The answer, still astonishing in its profundity, is contained at the beginning of this week’s parsha: “They shall make a Sanctuary for Me, and I will dwell in them [betokham]” (Exodus 25:8). The Jewish mystics pointed out the linguistic strangeness of this sentence. It should have said, “I will dwell in it,” not “I will dwell in them.” The answer is that the Divine Presence lives not in a building but in its builders; not in a physical place but in the human heart. The Sanctuary was not a place in which the objective existence of God was somehow more concentrated than elsewhere. Rather, it was a place whose holiness had the effect of opening hearts to the One worshipped there. God exists everywhere, but not everywhere do we feel the presence of God in the same way. The essence of “the holy” is that it is a place where we set aside all human devices and desires and enter a domain wholly set aside for God.

If the concept of the Mishkan, the Tabernacle, is that God lives in the human heart whenever it opens itself unreservedly to heaven, then its physical location is irrelevant. Thus the way was open, seven centuries later, to the synagogue: the supreme statement of the idea that if God is everywhere, He can be reached anywhere. I find it moving that the frail structure described in this week’s parsha became the inspiration of an institution that, more than any other, kept the Jewish people alive through almost two thousand years of dispersion – the longest of all journeys through the wilderness.

The Covenant & Conversation volume for Shemot is available to order here. Bereishit, Vayikra and Bamidbar are also in print.