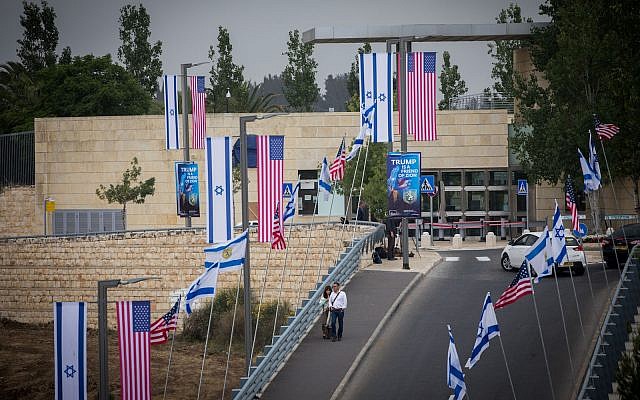 The US Consulate in Jerusalem's Arnona neighborhood, May 13, 2018. (Yonatan Sindel/Flash90)

For the next few days, we’re going to hear little but hurrahs for the US Embassy’s relocation to Jerusalem. And, of course, for Israel’s Eurovision victory. But Netta Barzilai did win the song contest, whereas the embassy isn’t really moving to Jerusalem. Like so much else in the age of Trump, it’s mostly smoke and mirrors, and we can only hope that no literal fire follows the smoke.

When President Trump announced his decision to move the Embassy, I pointed out that the title of the new consulate-general edifice in Jerusalem could be changed overnight – which however would mean little for the embassy’s practical work. But then-Secretary of State Rex Tillerson hastened to clarify that the actual move would wait until the site for an entire new embassy building was selected, the cost for its construction approved by Congress and the construction completed. In other words, indefinitely.

Well, Tillerson was soon out, and Trump took delight in relating how he had half-signed the paperwork for the new structure before he discovered that the projected outlay would be a billion dollars. So he scrapped it, and — though I doubt he took his cue from my suggestion — opted to spend only a few hundred thousand on a slapdash makeover for the consulate. On Tuesday, after all the hoopla, the staff at the renamed facility will total about 50, but that figure includes those who were posted there before. The number that actually moves in will be six: Ambassador David Friedman and his immediate retinue.

Six is presumably about the same as the personnel of the Guatemalan Embassy, which did move its entire operation to Jerusalem last week. But the Guatemalans aren’t leaving hundreds of staffers and local employees behind in Tel Aviv, as the Americans are. Even high-profile departments like the public affairs counselor’s and the press office are staying put, not to mention such sensitive outfits as military attaches and the stations of various US intelligence agencies. Of course, the diplomats will come to Jerusalem to conduct business with Israeli counterparts as necessary, but they already do that.

The State Department line is that “soon after [Monday’s ceremony], construction at the Arnona compound will begin for additional office space that will provide the Ambassador and his team with expanded interim capacity. Construction is expected to be completed by the end of 2019.” As for the rest, that is the vast bulk of embassy manpower and operations, one of its officials advised: “we have started the process of site selection for a permanent U.S. Embassy to Israel in Jerusalem.” Since Trump has ruled out significant spending, where’s the money coming from?

There’s no longer any mention of appropriation from Congress, whose legislation had required the move in the first place — even if the House doesn’t flip against Trump in the midterms. “It is too early,” the official allowed, “to assess the likely cost of a permanent Embassy. We need to determine our needs, select a site, and start the design and contracting processes. We expect site selection, design, planning and permitting, and construction to take seven to nine years.” That is, the can is being kicked beyond Trump’s second term — if he gets it. But that doesn’t prevent him, or Netanyahu, from taking credit now.

“During this time,” the official stated, “most Embassy staff will continue to live and work in Tel Aviv.” The edifice on Hayarkon Street on Tel Aviv’s waterfront will henceforth be called “the Embassy Branch Office” – a branch hugely bigger, and with far more important functions, than the titular headquarters. Even Friedman “will continue to divide his time between his official residence in Herzliya and a residence in Jerusalem.”

Meanwhile, the Americans have indeed upgraded the signs on the Jerusalem consulate and enhanced its landscaping, and Israel has evidently cut the red tape that usually slows any construction in Jerusalem and shouldered the expense for such necessities as an escape route in case of attack. As an Arnona resident commented on an Israeli website, “So far there’s only one benefit: after years of neglect, the city is cleaning up the neighborhood.”

The conversation we’re not having about Jerusalem

Why throw a wet blanket over a rare national simchah with all this nitpicking? Diplomatic fiction was always par for the course – all the more so in the age of Trump and his studious emulator (“witch hunt!” “fake news!”) Netanyahu. What matters is what they sell to their respective constituencies; The embassy is officially moving, after all, and I should cheer this symbolic triumph, shouldn’t I? I would do so gladly, as a proud citizen of Jerusalem for more than 50 years who needs no one’s recognition of my beloved city as the capital, but I have long felt that Israelis should stop railing against division of Jerusalem, and rather should contemplate how to share it, as an inevitable component of any accommodation with the Palestinians. The ex-consulate was ideally and (I suppose) deliberately situated, on the “Green Line,” to become a joint embassy in the shared capital of two states. Jumping the gun by designating it to Israel alone has just further dimmed this already fading prospect, even if Israeli military action or the Palestinians’ fatigue prevents their protest from getting any bloodier that it has been so far.

Jared Kushner, who will star in the US delegation to the festive inauguration, might as well consider this mission the final curtain of his much-touted “deal of the century” for resolving the Arab-Israeli conflict — of which nothing has so far materialized. His next arrival here looks likelier to be under the Law of Return as a fugitive from US justice, facing Israel with the sensitive dilemma and distraction of an extradition request.

Palestinians, Russia are also in the embassy game

The State Department spokeswoman has specified that “Consulate General Jerusalem will continue to operate as an independent mission from its historic Agron Road location” with “an unchanged mandate,” that is contacts with the Palestinian Authority and operations across the Green Line. This, of course, depends on the Palestinians’ consent to work with it, in the awkward constellation of two ostensibly unconnected US missions in the same city. So far they have flatly refused. The Palestinians may be increasingly isolated and desperate, as Israeli spin describes them, but this hardly guarantees that they will go along quietly. Friedman claims that the embassy move “will increase stability in the region.” I’d settle for a best-case scenario of no further destabilization, but this may be only one outcome that calls into question whether pandering to the base by “fulfilling” Trump’s campaign promise will pay off on the Middle Eastern ground.

For one thing: as I expected, Russia (where the Potemkin-village meme of fancy but false fronts originated) was quick to make hay from the Americans’ loss of credibility with the Palestinians. Russia has never rescinded the USSR’s recognition of the State of Palestine in the 1980s. Palestine, therefore, has a full-fledged one in Moscow. Indeed, in 2015 Israel’s ambassador to Russia had to present his credentials to Netanyahu’s other buddy, President Vladimir Putin, in the same ceremony and on an equal footing with his Palestinian counterpart. Imagine the outcry that Israeli officialdom would have raised if the same had occurred in, say, Sweden or France.

Formally, Russia still calls its office in Ramallah “Mission to the Palestinian National Authority,” but its head, Aydar Rashidovich Aganin was introduced as ambassador on Voice of Palestine radio for his response to the US move. He charged that it contradicts international law, adding “it is no longer acceptable that only one country sponsors the peace process.” Moscow recently reiterated that its offer to host an Israeli-Palestinian summit still stands. It’s still over the horizon, but the US Embassy’s super-hyped dedication may well advance Russia’s very real effort to horn in on this and other aspects of regional hegemony.

So is the rejoicing in Jerusalem a tad inflated and premature? I hope not, but I can’t shake off a feeling of being duped and a sense of foreboding.