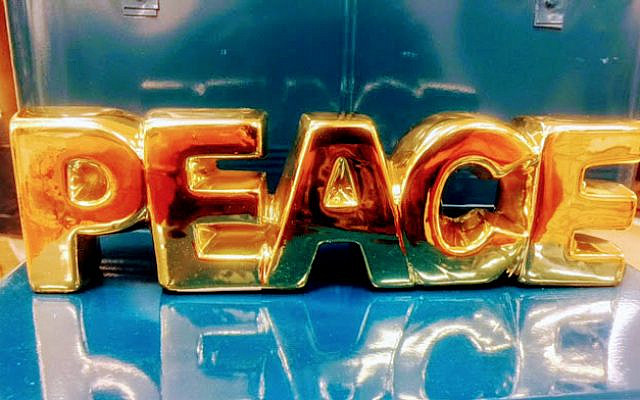 All too often if you ask someone what the greatest challenge of our time is, the answer you will get is achieving peace in the Middle East. In over 73-years since the founding of the State of Israel, there has been endless threats, terror, wars, negotiations, and even incentives to get to peace, yet no one has yet come up with a workable recipe that has been acceptable to both the Israelis and the Palestinians.

Until the Palestinians recognize and support Israel’s right to exist and take responsibility for their fate as a nation, no amount of territorial negotiation is going to make a difference. On July 4th in the United States, we celebrate the Declaration of Independence precisely for that reason. Every people is entitled to freedom and the right to set their own historical course. As former Soviet Ambassador to the United Nations, Andrei Gromyko declared on May 15, 1948:

Both Arabs and Jews have historical roots in Palestine and it would be unjust to deny the rights of the Jewish people to realize their aspirations to establish their own state.

Interestingly enough, the world was able to solve in just a little over a year the Covid pandemic which killed millions all over the world, but when it comes to the issue of Middle East peace, the greatest minds have researched and tried to solve it, numerous U.S. leaders from Carter to Clinton, Bush, and Trump have put their reputations and legacies on the line to hammer it out, and negotiators have sat for endless hours debating and seeking compromise, and nevertheless the result has been the same: No deal!

The question then is why? What is so intractable about the Israel-Palestinian conflict that no one seems to be able to solve it and that it has become virtually the Holy Grail of world issues on which if only we could solve it then everything else would-be nirvana. The conflict has been blamed for everything from the endless Palestinian refugee situation to Soviet aggression and expansion during the Cold War, the oil embargo of 1973, the rise and proliferation of Islamic terrorism, and countless other of the world’s ills. Anyone who even contributes to Middle East Peace like Menachem Begin and Anwar Sadat and Yitzhak Rabin and Yasser Arafat win the Noble Peace Prize, and that’s without there being a full and final solution!

Charles Selengut, in the book, Our Promised Land, lays out five (really six) major competing peace proposals and identifies why none of them have worked: 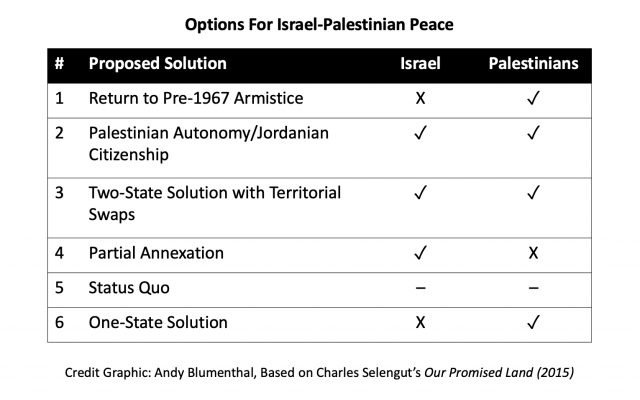 This option would mean Israel going back to the 1949 Armistice lines, giving back all the territory it conquered in the 1967 war of self-defense, including the Golan, West Bank, and even East Jerusalem—much of it strategic and vital for Israel’s defense in depth—and it would mean uprooting all the “settlements” and about 800,000 settlers in the Judea, Samaria, and East Jerusalem. This is an obvious non-starter for Israel!

All Israel settlements would remain, and Israel would maintain sovereignty and security over the West Bank, but all Palestinian areas would be under Palestinian civilian control and the Palestinians there would become citizens of Jordan. Given that the Palestinians are a threat to the Jordanian kingdom, this is a non-starter for Jordan!

This is similar to the Trump Peace Plan that would have a Two-State Solution where the major Israel settlements would remain, and Israel would exchange territorial land swaps from Israel to compensate the Palestinians. However, Israel would not maintain sovereignty over all of Judea and Samaria and would have to forgo some of the lessor/smaller settlements and outposts. Similarly, Palestinians would not get the whole of Israel “from the river to the sea” that they are seeking. Additionally, this option never fully or adequately addressed some of the finer complexities such as the status of Jerusalem and its holy places, Israel’s requirement to retain military control of the West Bank, and the Palestinians demand for the right of return of its refugees to Israel, therefore, this plan has also gone nowhere (so far)!

A year ago, Israel almost went ahead with the plan for Annexation of much of “Area C” of the West Bank, that is until Israel was instead able to get peace deals with the UAE and Bahrain under the Abraham Accords. Nevertheless, annexation of some or all of the West Bank remain an Israeli option on the table. The issue with full annexation is that it would bring another 2 million Palestinians under Israel control and give them citizenship, diluting and threatening the Jewish majority and very characteristics of the State of Israel. On the other hand, partial annexation (such as of Area C) would give Israel the key settlements, while providing civil autonomy to the Palestinians. Annexation of either sort would likely bring condemnation and potentially sanctions against Israel, and the Palestinians are naturally not enthusiastic to be left virtually stateless.

The status quo option means that nothing right now changes. Israel keeps the current borders, including all Jerusalem and the settlements, and the Palestinians agree to give up nothing. Of course, these means that Israel remains subject to worldwide criticism, accusations of occupation and Apartheid, and under threat of war, terror, and boycotts, divestments, and sanctions (BDS). The Palestinians remain with some civil autonomy but under Israel military administration. This is the situation that has been in place in some form or fashion for decades, and it is likely to stay this way possibly for decades more.

Why does the status quo prevail?

Each side thinks that time gives them the upper hand: Israel can continue developing economically, culturally, militarily including building the settlements to safeguard their strategic security interests and Jerusalem, and Palestinians think that they will be patient and out-birth and -populate the Jews, thereby leading to the final solution number six below:

The Palestinians remain confident that under a One-State Solution, they will be the majority and have everything they want including then control over all Israel, Jerusalem, as well as the return of their refugees. Alternatively, the Palestinians and Arab League believe that over time they will muster the military strength to overcome Israel through war, terror, and/or BDS and thereby cause enough pain to Israel that the Jews will be defeated, run, or just eventually give up. With 1.9 billion Muslims in the world versus 14 million Jews and 49 Muslim majority countries with one Jewish state the Palestinians have reason to believe that over time the odds are not only on their side but will be increasingly so.

Truly, there are no perfect options in this list, although the Two-State Solution seems like it holds the most promise to giving both Israel and the Palestinians at least some (or even much) of what each side wants. The question is can each side forgo some of the thornier issues that include theological ones (such as sovereignty over the the whole land, including Jerusalem) and potentially existential issues related to security and refugees. Prime Minister David Ben-Gurion said:

You either have peace and pay the price or war and take the risks.

So far, both sides (and it does “take two to tango”) haven’t been willing to “pay the price” for achieving a meaningful and durable peace. Nevertheless, I am certain that Israel’s willingness to negotiate and even to make painful compromises for peace has been far more prevalent, far-reaching, and consistent over time—whether in Oslo, Camp David, or Taba. In the meantime, Israel and the Palestinians continue to “take the risks” and remain in a perpetual state of sometimes active and more often passive war that is fought by Israel through military control and incremental settlement expansion and by the Palestinians through terrorism and their pursuit of the demographic population time bomb. When it comes to achieving peace, perhaps the wisdom of the ages applies here: “the short road is long”—there are no shortcuts to serious negotiation and compromise—and “the long road is short”—eventually, a solution for peace will be found even if for now it tragically and painfully evades us all.