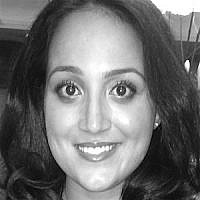 The Blogs
Daniella Reyhanian
Apply for a Blog
Please note that the posts on The Blogs are contributed by third parties. The opinions, facts and any media content in them are presented solely by the authors, and neither The Times of Israel nor its partners assume any responsibility for them. Please contact us in case of abuse. In case of abuse,
Report this post.

I am not really one that enjoys telling stories frequently. But I guess living in Israel can really change things. I have been living in Israel since January participating in a MASA programme. Every day I try and find a little Zionist inspiration to help me to learn more about Israel and to fuel my passion for Israel advocacy.

Today I had a meeting in Tel Aviv. Unfortunately being the foreigner that I am, I ended up on the same street name but in Ramat Gan. Israelis being Israelis, the bus driver started to speak to me as I was the only one left on the bus. Upon arrival to the address, he asked me what the name of the building was that I was looking for. After telling him the name he informed me that we must be at the wrong address because he could not spot any of the signs with that building name. The bus driver then parked his BUS in the middle of the street and got out so that he could search around for that building. After he returned to the vehicle, he told me to call my colleague to speak to her. We called my boss and she told me that she would come and pick me up from where I had mistakenly arrived at.

The bus driver then began to worry and diverted his whole route around Ramat Gan so that he could drop me off at a Kosher coffee shop so that I would not be waiting on the street in the heat. He then informed me that because the traffic was so bad, I could be waiting up to an hour. He asked me if I would be okay and was extremely worried about leaving me alone. I told him that I was upset that I didn’t even have a book to read with me. He then thought for a moment and asked me if a Tehillim (a book of Psalms) would suffice. After I answered that yes it would be great but that I didn’t have one, he passed on a huge Tehillim to me. He told me that I should take the Tehillim with me when I return to London and that I should cherish it forever. The bus driver also said that I should use it as a blessing and pass it onto someone that I care about.

After I bid the driver farewell and he wished me a chag sameach, I opened the Tehillim and read the inscription. The inscription said that he had received the Tehillim in honour of his mothers death who passed away a few years ago. It is a beautiful Tehillim that really helped me see the light today. It really showed me how much I love Israel and enabled me to fall in love with Israel even more than I thought I could.

I still do not know why I was shown such kindness today. I also don’t know how I ended up googling the wrong address and ending up in Ramat Gan. All I know is that I received a beautiful pre- Pesach blessing today. I felt honoured to have met a stranger that really cared about me and that passed on something so special to him. It showed me that there are still kind people in this world and that Israel is really the place that kindness occurs in the most.

I wanted to share this story to show how your Zionist fire can be sparked through anything. I never thought that I could love Israel more than I do right now. In the current world we live in, we must really search for blessings and love more often.

About the Author
Daniella Reyhanian is a graduate of International Relations and is currently working in the Intelligence sector in Israel. She hopes to one day fulfill her dream of working in Israeli politics.
Comments