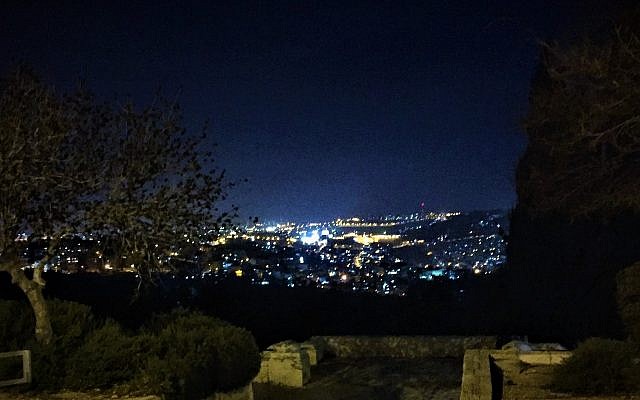 The moon beams down as I walk to the Tayelet, the promenade stretching across Jerusalem’s seam. Shimmering, it rises as I approach my destination, glowing between the shadows of the silent poplar trees. The air is brisk as I reach the gold stone gateway, and there’s nary a soul in sight. The stillness is offset by the whiz of cars and buses, a distinctive urban sound in a cold suburban night.

An empty tour bus stands vigil, parked near the site of the horror. It was here that the terrorist plowed his truck into a group of young Israelis — non-combat soldiers on an educational tour — and reversed into them again, murdering four. This attack struck close to home in too many ways. I work down the block and live a short walk away, and the victims were the same ages and at the same life stages as my two soldier sons.

Legend tells that Abraham stood on this ridge on his way to the binding of Isaac; it was here that he first saw Mount Moriah and took leave of his servants, walking in silence with his son to the site of the future Temple. Centuries later, four mothers and four fathers were not as fortunate as their forbearers. No angel grabbed the terror truck at the very last minute; no ram was served up instead of Shir, Shira, Erez, and Yael.

Alongside the roadway, the manicured lawn that once lined the road has been enclosed in wire fences, dug up and creating an angry brown scar. Deep, square holes punctuate the cracked earth, preparation for the concrete barriers that are no doubt to come. But how many barriers can Jerusalem bear?

Off in the distance is a spectacular sight. A carpet of lights covers the Holy Basin, with dots of white, yellow, and amber twinkling against the blue-black skies. Golden towers rise up on the hilltops, as splashes of florescent green mark the minarets of this Middle Eastern starry, starry night. In the center of the canvas stand the radiant walls of the Old City; behind them, the glistening Dome. If ten measures of beauty descended on the world, surely nine have made this their home.

I reach inside and pull out memories of this place in daylight. There is our 3-year-old on Shabbat afternoon, running down the curving paths to meet us as we descend dozens of stone steps. Golden sprigs of spring wheat bow gently in the breeze, alongside the terraced pathways and against the green grass. I hear my voice resonating deeply as I stand on the magical spot at the center of the observation platforms, where the curved stone walls bounce the sound back. There on the ridge two kites are zooming, dipping and diving in the western wind. There on the grass, an Arab family picnics, as we fly a Frisbee, and sons of Isaac and Ishmael exchange shy glances.

Digging deeper, I remember enchanted moments towards sunset, when Jerusalem is bathed in pale pinks and soft yellows, and the Western Wall is momentarily ablaze, against ramparts of brown and tan.

Jerusalem of gold and of copper and of light.

I remember the dance of light and dark on cloudy days, when the scene is ever-changing, with different hilltops illuminated in turn as the sun dips behind fast moving puffs; the rare winter days with crystal clear air, when the mountains of Moab are seen off in the distance; the hazy days when a gaze toward the desert reveals nothing beyond the nearest ridge.

I remember the first time I saw the gray separation barrier rising up in the corner of the canvas, injecting reality into the tranquil golden scene.

I reach deep inside to pull out these wisps of memories because, sadly, I have no recent recollections to recall. For although I live just a 20-minute walk from the Tayelet, like many Jews of Jerusalem, I have largely abandoned this breathtaking site. Because the truck terror was not the first attack this place has witnessed. We remember the romantic stroll that ended in the murder of Moran Amit during the second Intifada, the shooting spree on the neighborhood bus that took the lives of Richard Lankin and two others, and the elderly women who were stabbed by Arab assailants while walking here just last May.

Jerusalem of gold and of terror and of fright.

And after each attack, more of us withdrew from the Tayelet, limiting our walks to the upper promenade, if at all, and avoiding the winding lower paths. We turned our backs on the golden views of this vast expanse, choosing to stroll between the high rise buildings of Arnona or the narrow straits of the train-track park instead.

But this swath of landscaped land that spans from Abu Tor to Jabel Mukaber, connecting the various neighborhoods of Talpiot, was for decades “no man’s land,” belonging neither to Israel nor to Jordan between the 1948 armistice and the 1967 Six Day War. If there is anyplace we should be able to coexist in Jerusalem, surely it must be here.

The moon beams down as I stand at the Tayelet, the promenade stretching across the city’s seam. And as it does, I make a pledge to four families I do not know to come back to this place of promise, despite the pain and fear, to return to its ancient aqueducts and paths both far and near, to dream of peace among its peoples and recall the days of old.

Jerusalem of present and of future and of gold.