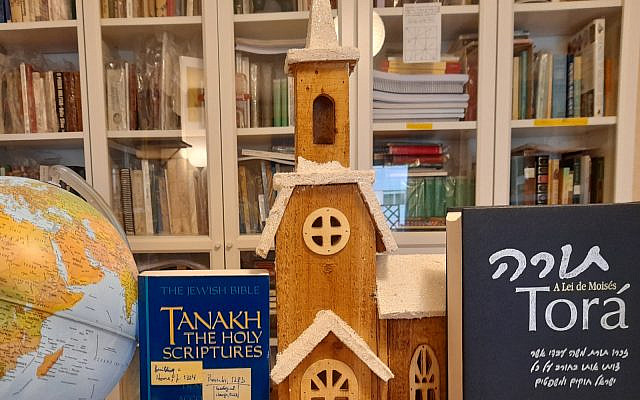 In the 19th century, a Master of the Eastern Wisdom wrote about Eliphas Levi, the famous Western Kabalist who was born in France in 1810:

“Except in so far, that he constantly uses the terms ‘God’ and ‘Christ’ which taken in their esoteric sense simply mean ‘Good’ – in its dual aspect of the abstract and the concrete and nothing more dogmatic, Eliphas Levi is not in any direct conflict with our teachings.” [1]

Later in the same text the Raja Yogi of the Himalayas asks:

“…Why it should be maintained that what is given by Eliphas Levi and expounded by H.P. Blavatsky [2], is ‘in direct conflict’ with my teaching? E.L. is an Occultist, and a Kabalist, and writing for those who are supposed to know the rudiments of the Kabalistic tenets, uses the peculiar phraseology of his doctrine, and H.P.B. follows suit.” [3]

While taking this into consideration, let us see now what Eliphas Levi had to say about Judaism and the future relation between Jews and Christians. Speaking of the Western world, he writes:

“Judaism is the oldest, the most rational and the truest of religions. Jesus, who set himself the task of reforming Judaism, never advised his disciples to abandon it. The reform of Jesus, unacceptable to the heads of the synagogue whose legitimate authority was never contested by the Christian master, has become a heresy which has invaded the entire world.”

“At first mistreated by the Jews, the Christians, once the power was theirs, outlawed and persecuted the Jews with the most shameful and cowardly assiduity. Their books were burned instead of being studied, and the precious philosophy of the Hebrews was lost to the Christian world.”

At this point he adds a prophecy:

“The apostles, however, were correct in their feeling that the Gentile ministry would last only so long and that the new faith would one day weaken. Then, they said, salvation will come again to us from Israel, and the great religious revolution that will reunite us with our fathers will be as a passage from death to life.”

Writing in the 19th century, Eliphas suggests therefore that the salvation of the West ultimately depends on humbly learning from, and making an alliance with, the Jewish wisdom tradition – and with Israel.

A prophecy does not reveal a fact: it points to a possibility. However, it makes sense to think that the unspeakable, centuries-old Karma of anti-Semitism must be dealt with and removed in its Causes, having its roots destroyed, before the West (and Middle East) can take its next step in spiritual – and sociological – evolution. This is most probably not a historical task that the West can avoid.

“The Hebrews are in possession of a science whose existence St. Paul suspected and which St. John, initiated by Jesus, both hid and revealed within the immense hieroglyphs of the Apocalypse, borrowing for the most part from the prophecy of Ezekiel.” [4]

Significant remarks. And one may ask: “How theosophical was Eliphas Levi?”

The above quoted Master of the Eastern Wisdom writes in Letter 20-C:

“To reconcile you still more with Eliphas, I will send you a number of his MSS. – that have never been published, in a large, clear, beautiful handwriting with my comments all through. Nothing better than that can give you a key to Kabalistic puzzles.” [5]

Eliphas had access to exclusive sources of knowledge and wisdom.  The master himself took part in “half a dozen” meetings with Eliphas and a few other Occultists in London around 1860,  as the  Mahatma writes in a letter.[6] Yet Eliphas’ books are not always easy to read and demand careful study. The Eastern teacher clarifies:

“… The little I am permitted to explain, may, I hope, prove more comprehensive than Eliphas Levi’s Haute Magie. No wonder you find it cloudy, for it was never meant for the uninitiated reader. Eliphas studied from the Rosicrucian MSS. (now reduced to three copies in Europe). These expound our eastern doctrines from the teachings of Rosencrauz, [Rosencreutz] who, upon his return from Asia dressed them up in a semi-Christian garb intended as a shield for his pupils, against clerical revenge. One must have the key to it and that key is a science per se.” [7]

The Raja Yogi makes it clear that Eliphas Levi, although imperfect, was in touch with real Wisdom:

“…When you complain of being unable to comprehend the meaning of Eliphas Levi, it is only because you fail like so many other readers to find the key to their way of writing. On close observation, you will find that it was never the intention of the Occultists really to conceal what they had been writing from the earnest determined students, but rather to lock up their information for safety-sake, in a secure safe-box, the key to which is – intuition. The degree of diligence and zeal with which the hidden meaning is sought by the student, is generally the test.”[8]

There is, however, a close inner relation between Judaism and classic Pythagoreanism. The master says:

“Speaking of ‘figures’ and ‘numbers’ Eliphas addresses those who know something of the Pythagorean doctrines. Yes; some of them do sum up all philosophy and include all doctrines. Isaac Newton understood them well; but withheld his knowledge very prudently for his own reputation (…).” [9]

As one tries to understand the present moment of human evolution and planetary transition, these are a few points to ponder upon, regarding complex factors like Israel, the West – and the wisdom of the East.

It seems it is not a baseless assumption, but an objective fact, that the Land of Israel and its divine wisdom hold a significant key to the spiritual future of our Western civilization.
________

[2] The first time HPB is mentioned, I have used her complete surname in this transcription. (CCA)

* Israel as a Utopia.

* Theosophy and the Second World War.