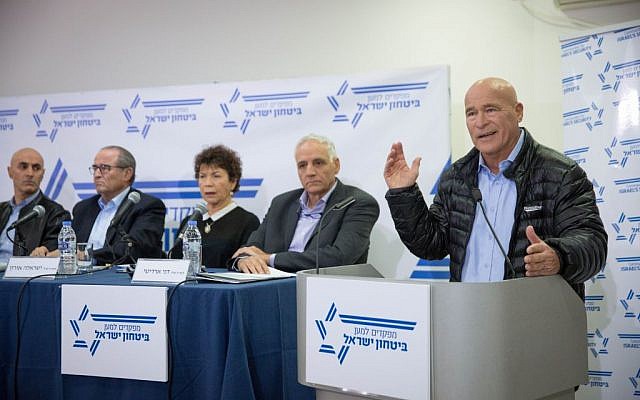 Commanders for Israel’s Security (CIS) a group of retired ranking officers and members of the security establishment recently launched a well funded public campaign to convince Israeli citizens that the time to separate from the Palestinians is now or else, there will be a tangible threat of a Palestinian majority in an Israel that incorporates the West Bank. Other than the racist overtones of the campaign which are insulting to the 20% of citizens that constitute Israel’s Arab minority, the campaign is not based on facts on the ground – excluding the Gaza strip, population growth among Jews and Palestinians is identical as just published by the Central Bureau of Statistics in Jerusalem so the likelihood of a Palestinian majority in the forseeable future is extremely remote.

The launching of the campaign at this time indicates that in addition to being racist and ill-informed Commanders for Israel’s Security are also strangely removed from the political reality in Israel not uncommon for military retirees. It is unlikely that in the forseeable future, a coalition, any coalition, will be able to produce the required majority to pull through a unilateral withdrawal that CIS covets so much. CIS are similarly ignorant of the diplomatic reality – the international community is highly unlikely to cooperate with any Israel move that will basically proliferate the status-quo, under even more unfavorable terms for the Palestinians.

CIS are likewise removed from the perceptions of the Israeli electorate which generally is not interested in an unrewarded unilateral withdrawal which would result in a miserable combination of an additional trauma of the withdrawal of 30,000 families from the West Bank (all those outside the fence, no less) and Palestinian and other terror against the IDF that will remain in the evacuated areas, unmitigated by the positive mutual relations that have developed over many years between Jewish and Palestinian communities in the West Bank.

Last not least, CIS are curiously removed from the security situation – a civilian Israeli withdrawal, even leaving the IDF in place, would expose the Palestinian population to increased insurgency by extremist groups, local and otherwise who would be encouraged by what would be viewed by anybody watching from the side as the beginning of Israel’s complete withdrawal, whatever they envision by that. And that would certainly have an impact on the security situation, not only in the West Bank but also in Israel itself.

Why do CIS not go a little out of their comfort zone and look into alternatives that provide a real benefit to the population as a whole ? An approach that combines complete security courtesy of the IDF with a modern and equitable government over Eretz Israel not including the Gaza Strip that leaves settlements in place and gives full Israeli citizenship to all Palestinians who want it ? The Federation Movement promotes a federal state divided into 30 cantons. 20 of them with a Jewish majority, 10 with a Palestinian/Druze/Beduin majority with full autonomy in the cantons and a joint federal constitution to protect the rights of all citizens. The demographic balance will be approximately 65/35 in favor of the Jews and there will be a double majority requirement: Major decisions require the support not only of the majority of the population but also the majority of the cantons which means that for Palestinians to “take over”, they would also need to change the majority status in 6 cantons, a formidable task unlikely to be possible in the real world. As is, at the current population growth the balance will remain the same.

Implementing a federation and regional government would make it possible for Israel to deal with its real problems in a way 27 modern federations already do. Instead of sowing fear among the population based on false facts Israel has to deal with reality head-on, not through denial and non-viable approaches promoted by chauvinist generals harping on ethnic separation in racist campaigns. We have to do better than that.

The author is the co-chairman of the Federation Movement www.federation.org.il

About the Author
The author served in the Prime Minister’s Office as a member of the intelligence community, is a member of the Council for Peace and Security, Vice Chairman of the Israel-Indonesia Chamber of Commerce, Co-Chair of the Federation Movement (www.federation.org.il), member of the council at 1948.co and author of "Identity: The Quest for Israel's Future".
Related Topics
Related Posts
Comments