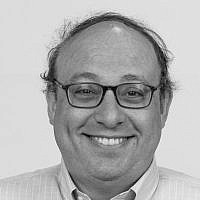 The Blogs
Nathaniel Helfgot
Apply for a Blog
Advertisement
Please note that the posts on The Blogs are contributed by third parties. The opinions, facts and any media content in them are presented solely by the authors, and neither The Times of Israel nor its partners assume any responsibility for them. Please contact us in case of abuse. In case of abuse,
Report this post.

Disclaimer: Please accept my apologies if the title of this essay creates an expectation that it will express a political point of view on the results of the recent Israeli elections. It will not.

As a Jew living in the Diaspora, I am very reticent to publicly express my personal views on political affairs and partisan matters relating to Israel, as I and my immediate family do not reside there and do not bear the direct consequences of many of the fateful decisions that confront the leaders and citizens of our beloved State of Israel.

Moreover, I believe rabbis should generally eschew publicly expressing partisan political views on specific issues relating to our own politics here in the US or Israel. Being a rabbi does not yield any greater expertise on political matters than others.

Moreover, meshing one’s personal political viewpoints can sometimes distort religion and spiritual values in the service of political ideology, and can create divisiveness in the context of a loving and supportive community that each and every shul aspires to be. Rather, I would like here to express a religious reaction to a recent organizational press release reacting to the results of the election in Israel.

Last week, Israel concluded its fifth round of elections in the span of four years. After rounds of indecisive results, stalemates, a short-lived coalition government of right, left and Arab parties that ultimately fell within a year, the Israeli electorate and its electoral system delivered a clear and decisive victory for former prime minister Benjamin Netanyahu and his center-right, religious and far-right parties. Netanyahu is poised to form a coalition government in the next few weeks and, like all Jews throughout the world, we continue to hope and pray for the well-being of the State of Israel and all her inhabitants.

Immediately after the elections the Orthodox Union, a treasured and essential communal organization, that does amazing work in many areas critical to us as Orthodox individuals and as a community, issued the following reaction:

We extend our congratulations to Likud leader Benjamin Netanyahu on the election results and his likely return to lead the government of the State of Israel. We trust he will deliver on his mandate to protect the Jewish state and its right to exist and to help support Jews worldwide. As the homeland of our people, we look to the to-be-formed governing coalition to preserve the essential Jewish character of the State, by maintaining public Shabbat observance, Kashrut, and conversion standards.

The sentiments expressed here are ones that all observant and committed Jews who cherish the State of Israel share and sign on to. However, as I read it again, the last sentence disappointed me from a religious and educational perspective. It is ,of course, true that an important part of the “essential Jewish character of the state” needs to be expressed in areas of public Shabbat observance, Kashrut and conversion standards (Though, people of good will can sharply disagree about how to achieve those goals in the current Israeli religious system, and what those “standards” are from halakhic point of view.)

However, on a second reading, there is a nagging question that rises to the surface? Are Kashrut, public Shabbat observance and conversion standards all that should be highlighted as what defines the “essential Jewish character of the state”? Are questions of the social welfare system that the State of Israel provides to its citizens, the type of economic system that is put into place, its policies on corruption of elected officials and governance, educational policies and choices, how the state deals with immigrants and minority rights, allocation of scarce medical resources, discrimination in educational settings, weapons sales to foreign countries, chilul Hashem (desecration of the Name of God) considerations in foreign policy, treatment of agunot, responsibility for the Jewish Diaspora, and a whole myriad of other challenging policy questions not fall under the rubric of defining the “essential Jewish character” of the State of Israel?

By the choice of the specific items in the press release are the authors continuing to play into the stereotype of Orthodoxy and a life of shmirat ha-mitzvot (Jewish observance) being focused on a limited set of concerns when it comes to the application of Judaism and Jewish values to the public sphere. Should not Jewish values and guidance not infuse the entirety of life, both privately, communally and nationally?

To put it in more direct political terms do we only care about Judaism as expressed in the policy of the Ministry of Religion, but not the Ministries of Social Welfare, Education, Foreign Affairs, Treasury, Health and so many other realms and not only with an eye to the limited interests of our particular communal needs? As Rabbi Yuval Cherlow, one of the leading religious-Zionist rashei yeshiva and thinkers wrote a few years back in a post of Facebook:

A Jewish state must be characterized, first and foremost, as all the prophets wrote, by justice and righteousness, by recognition of the needs of the convert, the orphan, and widow, with more strict definitions of slander and embarrassing people, and other such issues. This is what [the religious community] should be at the helm of leading; ethical behavior with the support of all the forces working against governmental corruption, in support of a society infused with lovingkindness and justice as the first element of any religious legislation.

My intention here is not to single out this particular press release or organization, as this sentiment has traction in wide swaths of the community. It is simply an example of the challenge that confronts us and one which should lead us to think more deeply into the language we use in our aspirational view of Israel as a Jewish state.

About the Author
Nathaniel Helfgot is rabbi of Congregation Netivot Shalom in Teaneck, NJ and a faculty member at the SAR High School in NYC.
Related Topics
Related Posts