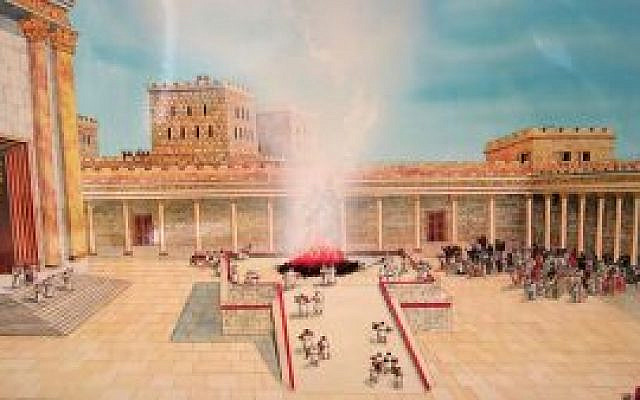 The week we begin reading the book of Vayikra, the third book in the Five Books of Moses, which is also referred to as ‘Sefer Hakorbanot’ (the Book of Sacrifices).

Despite the majority of the Torah being filled with stories, lore and commandments – Vayikra often deals with the sacrifices and worship performed in the Temple.

Why is it that the korbanot take up such an integral and sizeable part of the Torah? Certainly, the Bible- which is our guide and moral compass- should read more like an ethical book of legislation and fables than a butcher’s logbook?

However, it is prudent to note that despite the word ‘sacrifice’ often alluding to barbarism and discomfort, the word in Hebrew ‘korbanot’ descends from the word ‘kiruv’ which means ‘closeness.’

Alas, the sacrifices listed in the Bible aren’t centred around offerings and altars, but rather in ensuring a closeness between man and G-d.

It goes without saying that G-d’s omnipotence does not need animal sacrifices- rather the purpose of korbanot was used as an expression of humility and nullifying our sins. In biblical times the size of one’s herd and the amount of livestock they owned was a determination of wealth and social status.

Hence whether atoning for sins or saying thanks to the Almighty, a person would attempt to express his gratitude and sincerity through bringing something of value through an animal. If they were financially unable to afford a whole animal, a poor person was able to bring a sacrifice of flour or oil, often to be eaten and shared by the priests or other Israelites.

This is why till today we still read about korbanot, despite the ritual performance being inactive for 2,000 years.

The central theme of a korban was for the individual to donate and contribute something of value to G-d and the wider community-a notion which is eternal.

It is seemingly eerily fitting that we begin reading about the Korbanot in a time when the world is experiencing both its definitions: Radical sacrifice and extreme closeness.

Undoubtedly there is little need here to describe the sacrifice each of us has made
this week as Victoria entered into almost complete shut down in order to prevent further spread of COVID-19.

However, despite the challenges, it must also be noted the colossal benefit that can be reaped from this seemingly dire situation.

As circumstances develop, more and more we are realising, acknowledging and becoming increasingly thankful for the things we usually take for granted.

As of this morning, 3 billion people around the world are experiencing some sort of government-imposed quarantine, and while this can be a trying time for all of our sanity, it is also a time where we can truly enhance our relationship with our families. Not only can our time in isolation reaffirm our endearment and devotion to others, but can be utilized as a time of self-reflection, meditation and prayer.

To conclude this Dvar Torah, I would like to finish with a story regarding the two brothers Reb Zushe and Reb Elimelech, two founding fathers of the Hasidic movement in Europe who were famous for their sojourning’s and adventures throughout the Jewish Pale of Settlement.

On one occasion during their travels, upon arriving in a new town, the brothers were falsely accused of a crime and were thrown in the local county jail. While interned in their squalid and filthy cell, Reb Elimelech began to cry knowing that they would be unable to pray amongst such poor conditions. Comforting his brother, Reb Zushe said ” Why are you crying? The same G-d who commanded you to pray each morning also commanded you to abstain from prayer under such circumstances. In a location such as this, you connect to G-d by the absence of prayer!”

This realization, that their grimy prison cell was a way of connecting Hashem, caused the two brothers to dance and celebrate with fervours joy. The non-Jewish inmates imprisoned in the same cell were so moved by the sight, that they soon joined the dancing. It did not take long before the entire jail was swept up in the electrifying energy of joy, as dozens of prisoners were dancing and jumping around ecstatically.

The warden upon realising such a ruckus was being caused by two Jews celebrating their dirty conditions immediately had them removed to another cleaner cell, thus enabling them, in the end, to finish their ordeal in pray!

There is hidden good in every situation and confinement- certainly even now!

About the Author
Rabbi Gabi is Australia's youngest community rabbi. He leads the Ark Centre a Orthodox Community Centre with a Shule in the middle. Through his openness and inclusive approach to Judaism, Rabbi Gabi has redefined the 21st Century synagogue within the context of Modern Orthodoxy with a greater focus on song and spirituality. Rabbi Gabi holds a Masters of Social Work and is Chairman of Melbourne Fight Back Against Parkinson's Inc, a not for profit charity that assists people with Parkinson's disease.
Related Topics
Related Posts
Gabi Kaltmann
Comments