After more than 100 years of Jewish endeavours in Eretz Israel/Palestine, the verdict is in: Attempts to separate the country into a Jewish homeland and a Palestinian one have been an abject failure. For whatever reasons, both populations have, at times separately and at times in unison, rejected all efforts first of the British as a mandatory power and then of the international community represented by the League of Nations and later the UN, to break up the Land of Israel into two nation states, a Jewish one and a Palestinian one. The more time passes, the more unlikely a resolution of the conflict following the 2 State paradigm has become.

Even though that is the case, both Jews and Palestinians seem to be at a loss how to find their way out of the quagmire. Neither does the international community, notably the UN, try to contribute creative approaches. Everybody remains sold on the Two State paradigm regardless of how unimplementable this approach has become politically, if not on the ground.

The prominence of mission oriented Israeli military figures in most of the efforts of trying to resolve the conflict appears to contribute to the impasse – while the Generals know how to accomplish missions and are great at inspiring confidence in this regard, they continue to be at a total loss at garnering the political support necessary to get tasked to accomplish said missions. They’ll even be the first to admit that their proposals for separating the two populations, promising as they may sound on the face of it, are not at this time politically implementable.

The political right in Israel is hesitant about articulating a clear vision, vacillating between the full Monty, annexation of the West Bank in toto risking to incur the wrath of the international community and partial annexation in order to continue and make believe that Israel is still a card carrying member of the club of liberal democracies.

The political left, presently without any real leadership is at a total loss, sticking to the Two State paradigm like there is no tomorrow while not being able to frame a clear program of how to get public support for that paradigm whose implementation would require steps on the ground that are becoming ever more unpopular by the day.

The Palestinians are similarly stuck, both in their insistence on the Two State paradigm even though some realize by now that their self-determination is unlikely to come from there and in their struggle with Hamas in Gaza which prevents a concerted joint effort to advance a solution of the conflict with Israel.

Civil society both in Israel and in Palestine is otherwise engaged dealing mainly with the considerable fallout of Israel’s occupation of the West Bank and Gaza, at all levels but unable to generate serious political alternatives to the mess we all have created here.

So here is a proposal how to go about it, not particularly original because the founders of Israel, in the 30ties and 40ties of the previous century contemplated an approach just like it, but certainly timely. Concluding that a separation into two nation states appears to be beyond our capabilities at this time, the object must be to seriously improve on the status-quo, which, while technically maintainable, is a sure recipe for continuing international delegitimization and potential regional deterioration. While all our efforts should be accomplished in cooperation with the Palestinians, the ability to unilaterally implement measures that improve the situation would be advantageous. Needless to say whatever we propose should adhere to international law otherwise it would be difficult to garner the necessary support of the international community and it must improve the status of the Palestinian population materially providing them with full civil rights. Keeping Israel secure should be a major consideration and our neighbouring states should not be compromised by what we come up with. Last not least we should keep in mind that this is not geared to be a permanent solution but a stepping stone for a better future in other words it should be amenable to incorporate changes at a later stage.

So what do we have in mind ? We are talking about a citizen state between the Jordan River and the Mediterranean Sea, not including the Gaza Strip, with a population of about 11 M citizens, 65% Jewish, the rest Arab/Palestinian/Beduin and Druze. We are talking about a Federation with 30 cantons, 20 of them with a Jewish majority (blue on the map, and Jerusalem in gold), 10 with a non-Jewish majority (green and purple on the map) reflecting the demographic balance. There would be a constitution written jointly by Jews and Palestinians to protect civil and religious rights of both national groups and all citizens of the state thus finally fullfilling the committment  given in Israel’s Declaration of Indepence. The cantons would be largely autonomous with their own government and legislature elected once in four years by the canton’s population. The Federal government in Jerusalem would be responsible for Defence, Foreign Affairs, Macro-Economic policy and inter-cantonal issues like transportation, environment and a core education program limited to language and civics. All the rest would be dealt with by the regional governments in the cantons. 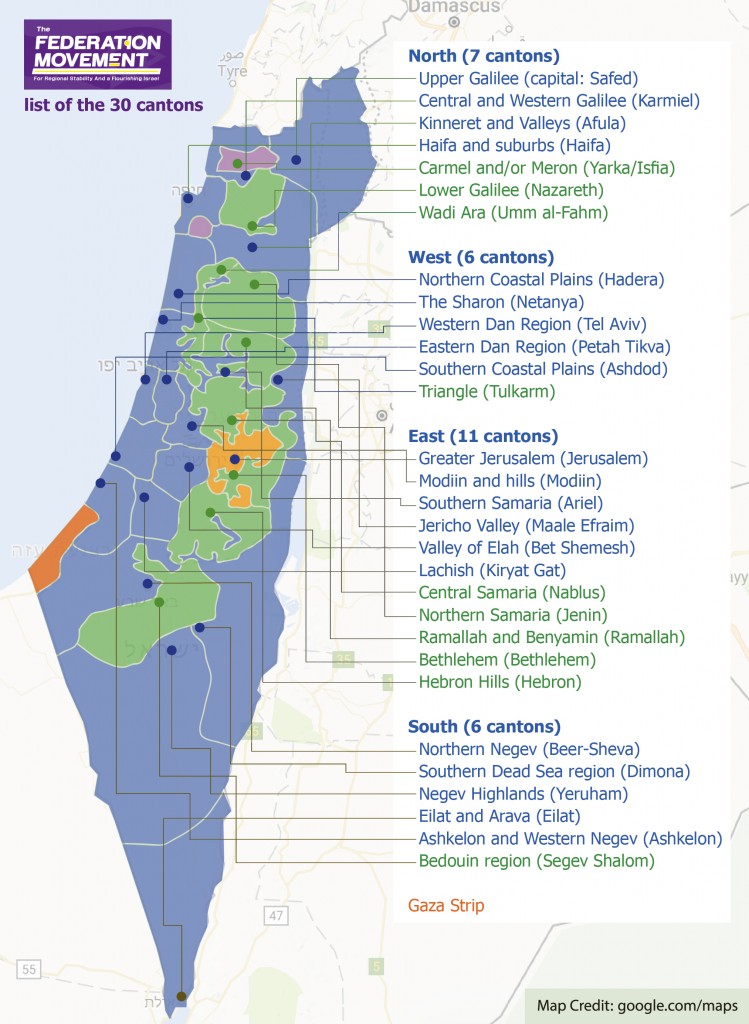 Size of the Knesset would be increased to 180 members to accommodate the added population (about 2 Million additional citiizens) and an upper house representing the cantons (with two representatives for each canton, regardless of size and population) would be added. Our proposal retains the name of the state, Israel, its present symbols and the law of return. There would be no right of return for Palestinians but in addition to an all-encompassing approach to address the refugee issue in a meaningful way, a lenient and open minded long term immigration policy would be developed to best serve the country and the population. We must keep in mind that the economic impact of the merger of Israel and its population with a per capita GDP of ca. 38,000 USD with the West Bank and its per capita GDP of ca. 3,000 USD could make excellent use of substantial foreign investment, including that of returning residents from both national groups.

A major Jewish concern, how to make sure that Israel will not be demographically challenged by an ever growing non-Jewish population will be addressed through the double majority principle: Any major changes in the make up of the system of government will require a demographic majority and a majority of the cantons. The implication would be that non-Jews would have to change the majority status of 6 out of the 20 Jewish majority cantons in order to gain a 16/14 majority of the cantons. While this is not impossible technically, it is unlikely to happen before people don’t give a damn anymore which nationality is a  majority and where.

This is a vision and a hope, a lot more than what is being presented by any political party vying to lead the country. It will become viable the more support it garners from the public – politicians are scared, by and large they wont stick their nose out before it’s not clear what the public thinks about this. This is part of our effort to bring this proposal to the attention of the public.

The author is the Co-Chair of the Federation Movement

About the Author
The author served in the Prime Minister’s Office as a member of the intelligence community, is Vice Chairman of the Israel-Indonesia Chamber of Commerce, Vice-Chairman of the Israeli-German Society (IDG), Co-Chair of the Federation Movement (www.federation.org.il), member of the council at israelimovement.co.il and author of "Identity: The Quest for Israel's Future".
Comments