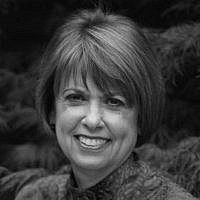 The Blogs
Sandy Eisenberg Sasso
Apply for a Blog
Advertisement
Please note that the posts on The Blogs are contributed by third parties. The opinions, facts and any media content in them are presented solely by the authors, and neither The Times of Israel nor its partners assume any responsibility for them. Please contact us in case of abuse. In case of abuse,
Report this post.

On Yom Kippur afternoon, we read the book of Jonah. Having prayed and fasted all day, our attention wanes, and we often miss the deeper meanings of the narrative. Jonah invites not only to examine our willingness to forgive, but to recognize the ways in which we refuse to acknowledge our responsibility to do the work necessary for the world’s redemption.

When Jonah is called to go to Nineveh, he runs away. On the ship carrying him in the opposite direction of Nineveh, a storm rages threatening to capsize it. Where is Jonah? In the bottom of the ship, asleep. He follows in a long line of biblical characters who seek, albeit unsuccessfully, to avoid a call to accountability.

When Adam and Eve are confronted with their disobedience to God, they hide. They are too ashamed by their transgression. When Jacob is offered the opportunity to climb the ladder of his dreams with angels ascending and descending, he refuses. He is afraid that in going up, he will risk falling. When Moses is called to tell Pharaoh to let his people go, he initially declines, and suggests that God send someone else. He lacks confidence in his own ability to lead.

This year we too are called upon to address serious threats to our future — devastating changes to our climate, serious risks to our democracy, the frightening rise of autocracies, rampant bigotry — racism and antisemitism, increasing violence, attacks on voting rights and human rights.

Yom Kippur invites us to examine how we will respond to these challenges. We can, like Jonah, run away, too consumed by anger to do what is needed. Perhaps, like Adam and Eve, we are ashamed by our own complicity and indifference to own up to our failings. Sometimes we feel like Jacob, too afraid to take a risk for fear that we will fail, and our safety will be jeopardized. Even with the best of intentions, we all worry that we are not up to the task, that others are more qualified to lead. At one time or another, we simply want to turn off the news, fade into the background, and go unnoticed.

There is a part of every one of us that wishes we could do what Jonah did, return to the womb in the belly of the big fish. We yearn for a time of innocence and protection. George Orwell described the security of the big fish this way: “There are you in the dark…with yards of blubber between yourself and reality, able to keep and attitude of the completest indifference, no matter what happens.”

But Jonah cannot remain there. In the end, the fish spews Jonah out on dry land, at Nineveh, the very place that Jonah had hesitated to go. And so, Jonah is reborn to fulfill his responsibility, however grudgingly. Will Yom Kippur with its grand liturgy be the womb from which we emerge? Will the final shofar blast release us to accept our responsibilities to ourselves and others, to our people, and the world? Will we overcome anger, shame, fear, and doubt to do what needs to be done. Salman Rushdie has suggested: “In place of Jonah’s womb, I am recommending the ancient tradition of making a big fuss, as noisy a complaint about the world as is humanly possible.” It is a good recommendation for the new year.

About the Author
Rabbi Sandy Eisenberg Sasso is the first woman ordained by the Reconstructionist Rabbinical College. She is Rabbi Emerita of Congregation Beth-El Zedeck in Indianapolis after serving for 36 years. Rabbi Sasso is the Director of Religion Spirituality and the Arts at IUPUI, Co-Founder of Women4Change Indiana and an author, having won the National Jewish Book Award and Indiana Author's Award.
Related Topics
Related Posts