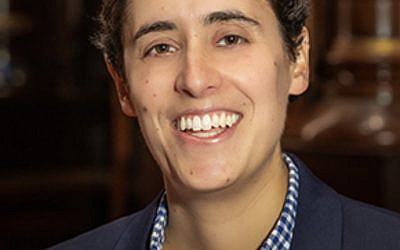 America’s newest Reform congregation is in a prison.  But is it a house of worship?

Religious services in correctional facilities are nothing new.  Islam holds them worldwide.  But something about the shul in New Jersey’s Northern State Prison isn’t right.  The congregation is described in a recent post on the blog of ReformJudaism.org.

“We are proud that one of the newest congregations in our Union for Reform Judaism community is located in the Northern State Prison in Newark, NJ, , “ write URJ President Rick Jacobs and supervising rabbi Hilly Haber.

The congregation’s name – NSP Chief Cornerstone of Freedom –  is part of the problem. It’s more a movement for prisoner release than a place for religious services.

Most synagogues are named after Jewish themes, such as Beth Shalom (House of Peace), B’nai Abraham (sons of Abraham) or simply, The Jewish Center.

But what’s a Cornerstone House of Freedom?  Why would we want  freedom for individuals who’ve been jailed  for their anti-social behaviors?

Co-author Hilly Haber is on the staff of New York’s Central Synagogue, which is affiliated with both the URJ and the World Union for Progressive Judaism.  Her job description is
https://www.centralsynagogue.org/about_us/our_staff/haber

“As Director of Social Justice Organizing and Education, Rabbi Haber works with the lay leaders in our Community Organizing Leadership Team (COLT) on systemic justice questions such as criminal justice reform and immigration, as well as on other areas of our social justice programming.

“Rabbi Haber also has taught men and women on Rikers Island through Manhattan College. She and her wife, Rabbi Rachel Marder of Congregation Beth El in New Jersey, are the rabbinic chaplains at Northern State Prison in Newark, NJ.”

A typical Jewish house of worship is where members go to pray, and to affirm adherence to Judaism’s commandments, as set down in The Torah.  The Cornerstone House of Freedom seems to exist as a statement against consequences of rule violations.

“Some of these men have spent their entire adult lives behind bars. Some were born into Jewish families, while others gravitated toward Jewish practice and identity later in life. Together, they have built a community grounded in liberation and freedom. They have imagined and realized for themselves a space that offers a counter-message to the one they receive with every frisk and cavity search: Here, each person possesses infinite sacred worth and dignity; each person is part of a whole, ” Rabbis Jacobs and Haber  write.

Jeffrey Epstein was Jewish.  He molested and trafficked in young girls
https://www.townandcountrymag.com/society/money-and-power/a28352055/jeffrey-epstein-criminal-case-facts/

Harvey Weinstein is Jewish; he is convicted of rape

Rabbis Jacobs and Haber appear to be arguing society is without rights to exact consequences for crimes.

Judaism, the religion, was forged in the 40 years after the Exodus from Egypt, culminating in receipt of the Ten Commandments at Sinai.  Among these laws are prohibitions against some of the very behaviors which land violators into a prison such as NSP.  I.e., Thou shalt not commit murder.

It’s entirely laudable when inmates take advantage of their times in incarceration to develop spiritual sides.  It’s even better if they can take from religion the connection between living honorably and avoiding consequences.

No one wants prison inmates to suffer the effects of COVID-19.  But they are inmates for a reason.

It’s not so laudable when religion becomes “social justice organizing” and campaigns for abandoning confinement of individuals with histories of criminal behavior.