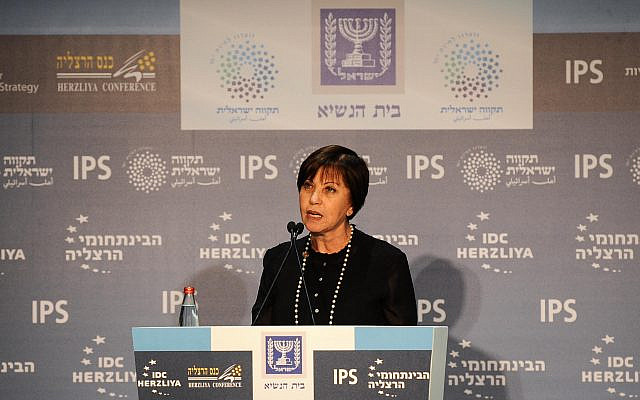 Zehava Galon is a veteran of the Israeli left. In the world of Israeli leftism, she has done it all. Galon began as a journalist for the defunct Politika newspaper and the notorious anti-Israel NGO B’Tselem before ascending the ranks of Ratz, the precursor to the modern neo-Marxist Meretz party we all know and tolerate. Galon was first elected to the Knesset under the Meretz banner in 1999 and remained in the Knesset until 2017, aside from a brief absence from 2009-2011. From 2012 until her resignation in 2017, Galon served as the chairwoman of Meretz. Since 2017, Galon has brought her career full circle, starting her own NGO dedicating to maligning Israel as an “apartheid state” on the international stage and returning to journalism from the columns of Haaretz.

Earlier this week Galon put pen to paper for the infamously radical suppository of extremist content to complain about what she deems as objectionable actions and rhetoric from both sides of the Israeli political isle. First pointing the finger at Likud’s Miri Regev, Galon branded the firebrand a vile racist for speaking ill of Yesh Atid’s Ram Ben Barak for employing known Islamist activists as parliamentary aids. Then Galon turned to Defense Minister Benny Gantz, denoting him a spineless capitulator to the far-right for his decision to define several NGOs who were funneling money to the PFLP as terrorist organizations.

Galon’s column is relatively tepid until the penultimate paragraph, where icon of the Israeli left lays out the strategy for the bloc going forward:

“The correct reply to the right is simple: Listen you racist, homophobic, xenophobic, misogynist animal, which is trying to drag us into a Taliban-like regime – we’re not afraid of you. We have principles: equality, love of mankind, freedom, brotherhood. Now get out of here, before we treat you the way we treated the original fascists.”

The way Galon characterizes the right is nothing new. The only interesting aspect of Galon’s characterization of the right is its almost direct quotation of American leftwing politicians and their rhetoric; “racist, homophobic, xenophobic” were Hillary Clinton’s descriptions of the “basket of deplorables,” “misogynist animal” was a rhetoric device used by the left in the mid-2010’s, specifically against Donald Trump in 2016, before the left discarded feminism as a failed rhetorical strategy during Trump’s presidency and reorienting itself towards racism and “science denial,” and “Taliban-like” is an absurd and very recent line of the American left against the American right as a “Christian Taliban” in light of the Taliban’s recent resurgence in Afghanistan. It seems as if the Israeli left is so consumed with internationalism and international issues, specifically an obsession with American issues, that it feels the need to import the square peg of issues, slogans, and rhetoric of the American left, from the recent to the passe, into the round hole of Israeli politics.

What is far more interesting is Galon’s characterization of her own camp. “Equality, love of mankind, freedom, brotherhood,” an ideology based entirely on baby-boomer clichés and falsehoods. Equality, freedom, and the entire concept of an individual is foreign to nature. There is no equality between different people, with different skills and successes, and by proxy between families and nations, the extension of families. The freedom Galon enjoys as a privilege of being a daughter of our family, Bnei Yisrael, does not exist as a vacuum. This freedom is a product of the specific order we have created over 3,500 years, not a principle upon itself. “Love of mankind” and the vague concept of international brotherhood is a farce. One cannot feel the same love for a foreign set of parents they have never met as they do for the same mother and father, obviously. The allegiance we feel towards our family, and by proxy for our community and nation, exists because we depended on them to free us from the prison of our animalistic instincts and appetites we were born into so we can be bnei adam, and they delivered. The person you are today exists only because you were born into and raised by your specific family, community, and nation, this deep love cannot be replicated for foreign entities. Ignoring these hard but vital truths of human nature and existence, Galon and the Israeli left instead pats itself on the back with empty, destructive boomer platitudes.

The most interesting aspect of the paragraph is Galon’s closing sentence. For all the talk of fascism, Galon and the international left seem to borrow a lot from Fredrich Nietzsche. To Galon, members of the Israeli right are “animals,” subhuman, untermenschen. Galon and her friends, on the other hand, have transcended the lines of religion and nationhood that have bound mankind since the Tower of Babel, they have broken the mold, they are enlightened, they are superhuman, ubermenschen. To paraphrase the writings of Neitzche, in this nihilistic world, the refined ubermenschen must rule over the imbecilic untermenschen by any means and to any ends they deem necessary. Means and ends that could include, as Galon threatens, like “the way we treated the original fascists,” a euphemisms for mass killing judicially, as in the case of the Nuremberg trials, or extrajudicially, as in the case of Benito Mussolini.

While the Nazis and Italian Fascists had the blood of millions of innocents on their hands, what is the crime of the Israeli right that should merit the same fate? The “occupation” of historically and strategically vital land won in a defensive war? The embrace of our national heritage, the Jewish tradition? Our steadfast will to protect Am Yisrael within Eretz Yisrael?

I could vomit up tired rightwing adages of “oh the tolerant/hypocritical left” as they seek to protect democracy and fight fascism by threatening their political opponents to either “get out” or face the gallows, but instead I will offer Galon a small commendation. Galon and her friends are playing to win. Galon and her friends are taking Israel and the stakes involved seriously. Politics is not pingpong, the prize for second place is not a silver medal but dire consequences. Since the central guiding philosophical principle of the Israeli right is ahavat Yisrael perhaps it is unimaginable for us to even conceive that a Jewish politician or movement could execute actions so unthinkable against their own blood as Galon has threatened. BzH, if we too get serious about securing our country from such extremism, we will never have to find out.