Today’s blog is dedicated to a singular French rescuer and his family.

Andre Baccary was born 132 years ago, on July 19, 1889, in a little French hamlet, Montigny-le-Gannelon, some 80 miles Northeast of Paris. He fought for his country in the First World War and lost one of his legs in one of the battles. 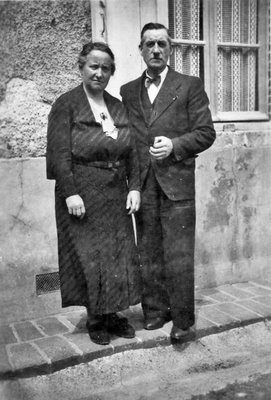 In his young days, he moved to the commune of Bondy, next to Paris and there he started working as a teacher in an elementary school at Martel street, in the French capital.

Many Jewish children were attending this school and Baccary’s remarkable dedication and integrity became well-known.

Following the Nazi occupation, he stood up for his Jewish students who were wearing the yellow star and were often taunted by some of their fellow classmates.

Other times, when informed about possible German round-ups and inspections, he gave advance warning to the Jewish children asking them not to attend class.

As time went by, the situation deteriorated and Andre conceived the plan of sheltering Jewish children in his own house in Bondy. His first guest was Pierre Canetti, who by the time had lost his mother. The second one, in 1939,  was Henry Brones.

Andre and his wife Clemence made another courageous decision. They started to give refuge to more children at their summer house in Andre’s hometown, Montigny-le-Gannelon. They believed that this faraway little village at the Euer-et-Loir, could give maximum protection to the persecuted children. Years earlier, their house at 9 Saint Gilles Street became a vacation camp under the name “Children outdoors”.

In July 1942, the French police carried-out a surprise round-up at the 10th district of Paris, arresting and deporting those Jews who did not have French citizenship.

Amidst the desperate situation, Gedalia and Simha Zavarro turned to the Baccary couple asking them to shelter their 3 children, Roger, Edith and Renee.

Clemence and Andre immediately accepted and took the siblings to their summer camp refuge. There, they were looked after by Clemence and her daughter Yvonne, while Andre would continue teaching and Paris and returning to Montigny-le-Gannelon on weekends and holidays.

In addition to the sheltering operation, Andre started to secure forged documents for the Jewish children who did not have the French citizenship, paving their acceptance to local schools. In the meantime, more parents turned to the couple to protect their children, so that in addition to the Zavarro, the summer camp house hosted Henri Pechtner, Roger Friedman and the Albert, Henry and Renee Osinski siblings.

Clemence became the pivotal figure in the Montigny-le-Gannelon safehouse, offering affection and security to some 10 children there, aged between 3 and 15. All of them were protected till the very day of the liberation of France. The older ones attended the Cateadun Lycee and would return to the summer camp on weekends, whereas the youngest ones stayed at the house, under the care of Clemence and Yvonne and would attend the elementary school under false identities. For instance, Henry Pechter became Henry Pechenaire and the Osinsky siblings became Tornoi. 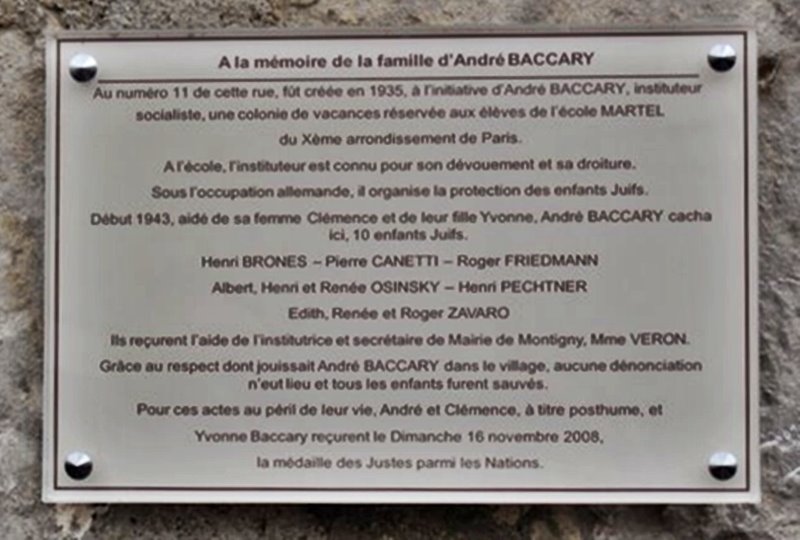 Plaque in the summer camp of the Baccary family, at Montigny-le-Gannelon. Photo Archive Nicole Ballais. DR

Worth mentioning is the fact that the little hamlet of Montigny-le-Gannelon had 200 residents at the time and all of them were aware of the life-saving feats of the Baccary family, without ever denouncing them.

All that time, Andre continued teaching in Martel while offering shelter at his house in Bondy to the parents of the Osinski children, David and Faiga and their grandparents, Joel and Laja, while the children were under the excellent care of Clemence and Yvone.

The Baccary couple were highly esteemed by their neighbors and acquaintances. They accepted money from those parents who could afford it but never turned away all those other children who could not be financially supported. Andre was well connected with the Municipal authorities from who he managed to get food stamps for the children who lacked the parental financial aid.

Remarkably, all of the children sheltered by the Baccarys had survived the war which, at that front,  ended in August 1944 with the liberation of France.

On February 3, 2008, Yad Vashem bestowed upon Andre, Clemence and Yvonne Baccary the title of Righteous among the Nations, a well-merited recognition to this singular family of heroes.

The Wallenberg Foundation is currently engaged in the process of proclaiming both residences at Bondy and Montigny-le-Gannelon as Houses of Life.