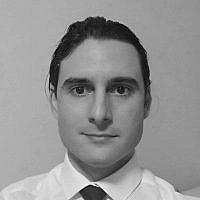 The Blogs
Nik S. Bozic
Apply for a Blog
Advertisement
Please note that the posts on The Blogs are contributed by third parties. The opinions, facts and any media content in them are presented solely by the authors, and neither The Times of Israel nor its partners assume any responsibility for them. Please contact us in case of abuse. In case of abuse,
Report this post. 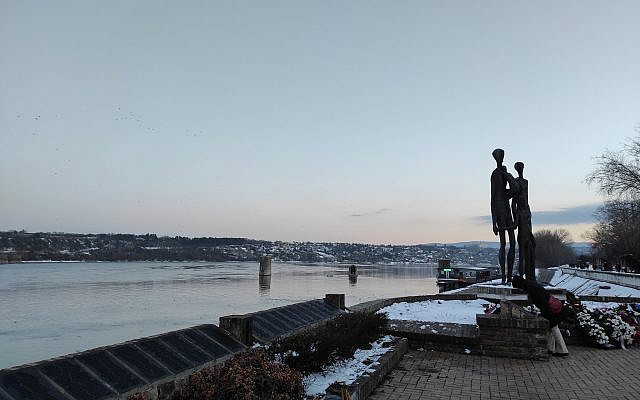 Memorial to victims of the massacres of January 1942 at the same place it happened. Novi Sad, Serbia. Author's own work.

Today the waters of the Danube in Novi Sad are very cold, but not nearly cold enough to freeze over.

There are seagulls bathing in its waters, crying out as they catch fish. The light shimmers gently over flowing ripples through lightly snow covered banks. The hill of Petrovadin fort across the water has just a smattering of snow, dotted on it’s grassy rocky slopes. A few days ago there wasn’t even any snow. Young couples walk by with their children in a stroller enjoying the fresh crisp breeze.

There were no seagulls bathing in the waters some 80 years ago, and no patches of grass showing on the hill across the water in 1942. And no carefree young couples with prams. It was -30 C and the river was frozen over thick till March back then. Winters are much milder now, but even for those days the winter of 41-42 was a particularly harsh one. The only cries and screams were those of mothers and children.

80 years ago between January 21-23, a heinous crime took place on the banks of the Danube in Novi Sad on a level of depravity that is hard to believe man is capable of.

Over 3500 Serbian and Jewish men, women and children were massacred by fascist Hungarian soldiers and police in Novi Sad and the nearby areas that month. 1300 of them were killed between 21 and 23 of January alone.

Entirely out of their own volition. They were not told to to do it by German Nazis.

Many were killed in the most barbarous way. The lucky ones were shot, others were bayoneted to death. Some in front of their mothers and wives. The worst way to die though was being taken to the frozen riverside alive, forced to strip naked and thrown or marched into holes in the frozen river.

A few months later in March, the bodies washed up somewhere near Belgrade and were put into a mass grave.

Supposedly the Hungarians were looking for Partisans, but in reality none of the people killed were Partisans. They were just ordinary Serbs, Jews and some others. The Hungarians simply wanted to engage in a reprisal attack on the civilian population, who they thought might be sympathetic to the Partisans.

It was almost as if something in then had reverted back to the days when their Magyar ancestors had roamed and pillaged the Eurasian steppe and occasionally engaged in human sacrifice to the old gods.

The human sacrifice this time was not of a religious nature, but just an orgiastic festival of bloodlust and anger.

Today most of the buildings by the riverside at the place the bodies, dead and not yet dead, were thrown into the river are Brutalist post-war buildings. I tried to look for one that would have been there in 1942.

Finally I found an old Austro-Hungarian building, I walked up to it’s peeling yellow walls and aging wooden door. I touched the door and looked up at the windows, imagining that through this very door someone would have heard the screams and cries from not 50 meters away. Or perhaps they themselves were victims.

Today the river freezes no more, and the world of Novi Sad Jews too, is no more.

One must never forget the memory of the Jews, Serbs and others murdered in January of 1942.

*The author has watched extensive survivor testimonies of the Novi Sad massacre from the Fortunoff Archive and read Yad Vashem testimonies.

About the Author
A London born history and geopolitics researcher. I am of Serbian and Israeli heritage.
Related Topics
Related Posts
Comments