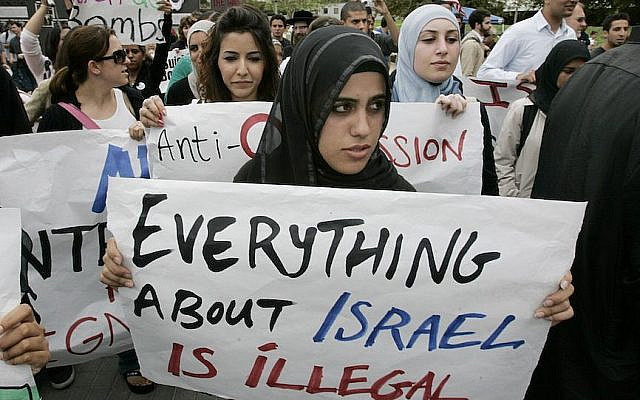 In an interview in the New Yorker, the eminent medievalist, David Nirenberg, an authority on “anti-Judaism,” uses that term in an effort to make some sense of the upsurge in violent crimes against Jews across diverse societies and the disproportionate place of Jews in public discourse in countries with few Jews, like Poland and Hungary.

Nirenberg uses the term, “anti-Judaism” interchangeably with “anti-Semitism,” the most commonly used term (in varying spellings), for what I prefer to call Jew-hatred or anti-Jewish actions. In fact, Jew-hatred is not one phenomenon but a bewildering variety of them, which all share a malevolent focus on Jews, projecting onto Jews dire traits that threaten others. Distinguishing among today’s varieties and understanding what they share is critical to understanding ourselves, the problem we face, and how to respond.

“Anti-Judaism” is about religiously based hatred of Jews. A vast library chronicles the Church’s teaching of contempt for Judaism, its incitement of fear, loathing, and hatred of Jews; its ascription of demonic power to Jews, literally, in league with Satan, and their inherent and insatiable drive to do harm to all non-Jews and to Christians and Christianity, in particular (after all a “people” who murdered God is capable of anything).

Scholars have shown how these tropes were secularized and thus, like a mutating virus, were able to “travel” from pre-modern, religiously-based societies to increasingly secularized, modern ones, giving Jew-hatred a new lease on life.

The point I make in my essay, “A Plea Against ‘Anti-Semitism’” (https://blogs.timesofisrael.com/a-plea-against-anti-semitism/), against the use of the terms, “anti-Semites,” or “anti-Semitism,” or the somewhat less problematically spelled, “antisemitism,” is that the people who invented these terms did so precisely in order to distinguish between a medieval, primitive, religious–  outmoded– kind and theirs, supposedly based on scientific “race” and therefore, fit for modernity. Such racists did not use the classic Christian arguments against Judaism; they made a rather different argument, with very different implications. In theological Jew-hatred, Jews can convert and, in theory at least, cease their loathsomeness thereby– be “reborn.” In fact, many Jewish men who converted became high-ranking authorities in the Church itself, and all Jews who converted benefitted immediately, with exemption from anti-Jewish discrimination. This “tolerance” was not confined to Church elites. Even murdering mobs in the Crusades or in pogroms across the map of Spain in 1391, gave Jews the choice of baptism or death. To racist Jew-haters,“ conversion” does not exist.

It is true that racist and even anti-Christian Jew-haters could not have succeeded as they did, and clearly, still do, had there not been a prior, pervasive base of anti-Judaism, which is the shared Christian legacy of all European countries and a key why reason Jew-hatred still exists across so many geographic and cultural boundaries. For all the differences between Europe and the US, this argument applies to the US, as well, while not itself sufficing to explain contemporary Jew-hatred in either location.

But one has only to read Church documents about Jews, either of the Catholic Church up to Vatican II, or Luther’s anti-Jewish invectives, to encounter theologically-based opposition to Judaism and to see that calling secular or nationalistically-driven Jew-hatred, “anti-Judaism,” distorts both phenomena and their different goals and methods, and invites disingenuous denials by those who harbor anti-Jewish bias which, they argue, is not religious, but justified.

As for “anti-Semitism,” while linguists constructed a category of semitic languages, and scholars, a group of Semitic peoples in antiquity (who never called themselves such), Jews are not Semites. That is an absurd, racist proposition. The term “anti-Semitism,” however it is spelled, asserts that there is such a thing as “Semitism,” which inheres in Jews, to which one can legitimately be opposed. In avoiding the “J-word,” it also treats “Jew,” as a term of opprobrium, that last thing that Jews beleaguered by today’s assaults should be internalizing.

There may be no perfect term for what we are experiencing but there are solid reasons to call the phenomenon what it is. “Jew-hatred” implies no more about the emotions of its bearers than does the term, “hate crime”—a recognized type of offense under US Federal law—about its bearers. The focus in both cases is on the manifestation, in speech or other act. As in sexual harassment, the focus is on the experience of the victims, not on the mental state of the perpetrators.

The opposition of some Jew-haters was relatively moderate, expressed in support for legal discrimination against Jews and limits on Jewish immigration, but eschewing violence. For others, that did and does not begin to suffice. The official Church never called for the murder of Jews; the goal was conversion which, so unlike the case with racist Jew-hatred, in theory at least, was the solution. Dead Jews brought the Church no gain, while every conversion testified to the truth of Christianity in the Church’s never-ending competition with Judaism for ultimate theological vindication. Jew-haters loosed from the theological limits of the Church had very different methods and no limits, as we know. Did a link between these phenomena play out in certain segments of European societies; was there a species leap, so to speak, between religious and racist Jew-hatred? Yes. Can that occur in other contexts? Yes. That does not obscure the differences between these phenomena, their methods or their goals, or the need for clarity about what we are encountering now, so that we can respond accordingly.

The distinctions we learn from past encounters are relevant now. To anti-Zionists, there are “good Jews.” Those are the apolitical kind– quiescent on the Jewish national question; people who consider themselves members of a religion or a culture only, content to be a minority with equal civil (individual) rights, but not nationalists and certainly, not supporting Jewish sovereignty in a state for themselves or any Jew. In this, they are distinct from non-Zionists, who simply prefer to live where they do and not in Israel, but who are not ideologically opposed to Jewish sovereignty in Israel.

The “good old days” in anti-Zionist thinking is the supposed “Golden Age” in Spain, in which Jews, like all dhimmi– monotheistic non-Muslims, Christians, too– lived as demeaned but protected subjects, suffering discrimination meant to demonstrate the superiority of Islam but free to practice their religions within certain limits (never as equal, much less competing, religious options), and to prosper economically. The category “dhimmi” was both religious and political; it was and is the political expression of Islamic religious dogma.

Political Zionism meant, and means, a Jewish declaration of independence from dhimmitude, which is intolerable in a certain strand of Islamic theological argument, and practice. The choice that adherents of this ideology put for Jews today is between dhimmitude, and politicide—annihilation of a fundamentally illegitimate Jewish state—illegitimate because it is Jewish, and a state. This is the ideology of the current regime in Iran and of other Muslim extremists. Conversion– religious and political– Zionists becoming non-Zionists, or better, anti-Zionists– is an option in this ideology, replete with missionaries, including Jewish ones, who peddle it. Jewish national self-determination is not.

There is also a pragmatic reality, counter to this ideology, seen in the peace treaties, honored despite tensions, between Egypt and Jordan– polities with a deep imbrication of religion and state and not what anyone would call secular regimes– and Israel. We see this dynamic in behind the scenes deals between various theocratic Gulf states and Israel, too.

However significant these political accommodations are, politicized theological positions mark this arena and neither “anti-Judaism”  nor any spelled version of “antisemitism” encompasses this phenomenon. “Anti-Zionism” does, a position radical Islamists share with militantly secular and even anti-religious radical leftists. And with some religious Jews.

While there is no such thing as “race,” racism certainly exists. While we must pay attention to the racist underpinnings of contemporary anti-Jewish violence, we must also recognize today’s politicized anti-Judaism, married to anti-colonial discourse and expressed in blanket opposition not to specific policies of Israeli governments but to the existence of a sovereign Jewish polity. This ideology rejects discussion of the Israel-Palestinian conflict as a nationality conflict, with its particulars but also similarities to other nationality disputes. Rather, it posits an illegitimate regime, to be extirpated.

The term “anti-Semitism” was invented as a mind-and-language game in the service of hate. Its purveyors have descendants today who distract from their real intentions by protesting that one cannot call their anti-Zionism, “anti-Semitism,” because they are also, or the only real, “Semites.” “Semitism” does not exist. It is not a legitimate ground for opposition, violent or otherwise, nor the basis for a political claim. Anti-Zionism denies Jews the right to national self-determination, while promoting this right for others. That is the definition of bias.

Being alert to the antecedents of what we are experiencing today and to the distinctions and connections between the various manifestations of Jew-hatred can only position us better to confront what we are up against.

About the Author
Shulamit S. Magnus is a professor of Jewish history and an award-winning author of books on Jewish modernity and on Jewish women's history.
Related Topics
Related Posts
Comments