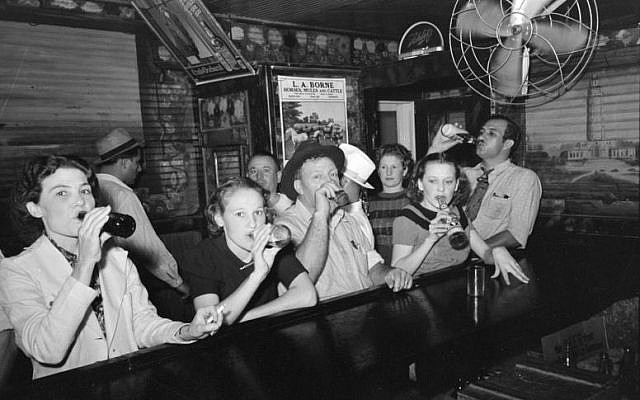 Photo by Russell Lee for Farm Security Administration - Office of War Information Photograph Collection (Library of Congress)
1984
Half a can of beer given to him by his favorite uncle while on vacation in Miami. They made him perform jokes in front of the whole family. He was six.
1992????
On a trip to Disney World with same uncle and cousins. (Habib, his mother, and brother, had already moved to Miami.) Drunk at a Denny’s barking orders, embarrassing older brother Nabil, but entertaining his family like a clown. Collapses on the steps of the motel where they were staying, laughing like a little maniac. He was 12.
1994
A case of Budweiser in a Honda accord with a high school buddy he met on the football team. Then later on that same night, drunk in Coconut Grove asking to use the restroom in various restaurants and being denied. Relieves himself next to the dumpster behind a hotel.
1997
A bowl of weed at his best friend’s house. He ends up laughing at everyone and everything the entire night. Someone orders pizza. Another friend brings a couple of Hialeah Chongas who jump in the pool and remind Habib of hippos in Africa. At this time, he’s attending community college.
1997 end of the year.
Ecstasy at same friend’s house. He was afraid to try it, but his friends ambush him with it. It’s so pure, that Habib feels reborn while shopping with his mother the next day.
1999
Absinthe smuggled from Spain. He has a floating drunk feeling, despite the taste. This was with the same best friends but now living in a condo in Brickell. His friend’s neighbor, a single woman in her 30s, kept banging on the wall whenever they got too loud.
New Year’s Eve 2000
Ecstasy again at Shadow Lounge in Miami Beach. Partied the whole night. Stared at a strange looking Russian couple fighting and tried to write a story about it the next day.
2004
Mushrooms in Amsterdam with his travel buddy Montes. He was so high he couldn’t cum with the Brazilian prostitute in the Red Light District.
2004
A bowl of weed with his friend Montes before a tour of the Vatican grotto. He felt an evil presence despite the holiness. He was 27.
Same Rome trip in 2004 –  Grappa at the quaint restaurant across the street from the hotel with Montes.
2007
A feeling that all life has not been lived, so, – “I need Spain, or Key West, or San Francisco or the Dominican Republic, or Cuba or Tel Aviv or anywhere else but Miami.”
About the Author
Fawzy Zablah was born in El Salvador but raised in Miami. Among his works is the short story collection CIAO! MIAMI and the novel RARITY OF THE CENTURY. His fiction has been published widely at Hobart, 3AM Magazine, Acentos Review and Expat Press. His short story, THIS MODERN MAN IS BEAT, was adapted into an award winning short film in 2015 currently playing on Amazon Prime. He is hard at work on a novel about the Arabs and Jews of Latin America with the working title of GITANES.
Comments