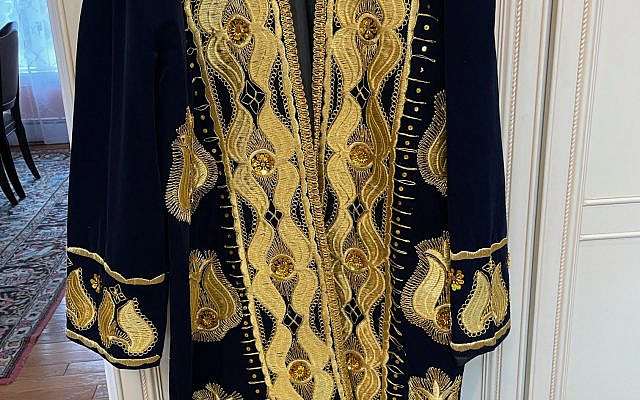 Front of the Bukharan Joma. Photo by Jonathan Khaldarov

Starting with the Shabbat reading of two weeks ago, I’ll always remember parshah Tetzaveh as the portion where the mask came off and the priestly robe went on.

The complex descriptions require a lot of interpretation to bring it to life, especially illustrations. Several Chumash volumes provide drawings of the garments and the breastplate to help readers make sense of the prose. I’m particularly fond of the Stone Chumash’s artistic approach, which depicts the ephod with a groovy 1960s-style paisley design.

I become intensely aware of garments that Saturday when I reached the office building that currently houses my shul, Chabad of Bedford, NY. The building houses medical offices, so signs related to the pandemic protection covered the doors. Dozens of times I walked through the warnings about masks and social distancing. The warnings faded into part of the pandemic landscape, unnoticed but followed.

Then, for Tetzaveh, the signs were gone. All of them, nothing remained but ghostly strips of scotch tape. The door looked shockingly empty. It no longer functioned as a billboard of warnings, but just an entryway. This must have been in response to New York State’s decision to drop its mask mandate for private employers as of February 10, with some exceptions. Out of habit rather than mandate, I donned my favorite Day of the Dead (Dia de Los Muertos) mask as I walked up the stairs to the shul. 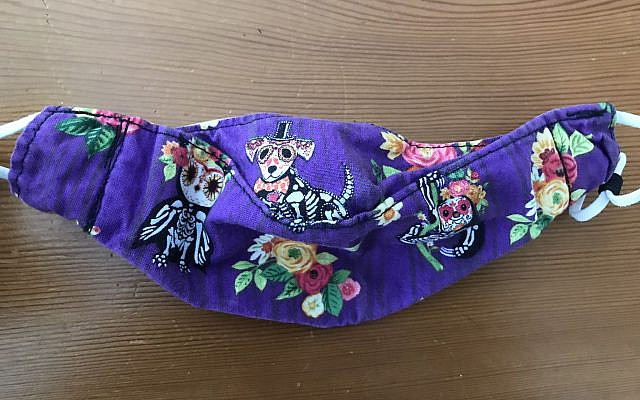 The last mask at shul. Photo by Van Wallach

Inside, nobody at services wore a mask, so I removed mine. The removal of the door signs and the mask-free service put me in a smiling, even giddy mood.

But wait, there’s more! The service soon launched into Tetzaveh. The reading included a delightful annual ritual at the shul. Every year for Tetzaveh, a congregant originally from the Soviet Union, Jonathan Khaldarov, brings a magnificent cobalt-blue Bukharan robe (called a joma) that had belonged to his grandfather. Anybody called for an aliyah can don the robe as he reads the blessings before and after the portion. My turn came and I eagerly slipped into the robe, resplendent with its gold-colored designs. It fit well and I felt, well, priestly (next year I’ll wear my Bukharan kippah).

I asked Jonathan about the background of the robe. He explained, “My grandfather Khanan (OBM) had purchased a few of these 25-30 years ago and gifted them to a few to his children and grandchildren. As I am his oldest grandson of very many BH, he gifted to me with a simple wish and blessing that I/we wear it on many simchas and happy events (weddings, brit, Bar/Bat mitzvah). The Joma (robe) is traditionally worn on happy occasions and has been a tradition for many years.” 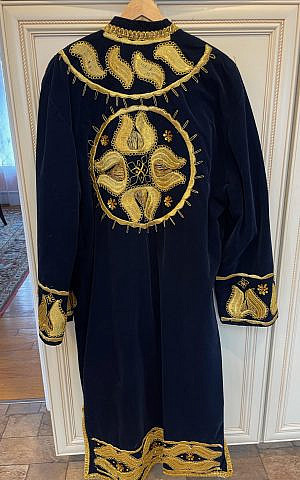 Back view of the Bukharan Joma. Photo by Jonathan Khaldarov

I felt a jolt of connection as the rabbi read the intricacies of the Kohen Gadol’s couture and ordination. It reminded me of the passage in the Passover Haggadah where we are told to feel like we are actually taking part in the Exodus, not just reading about it. Wearing the joma put me right in the middle of Tetzaveh. Our rabbi especially rocked the joma when he put it on!

(As I held out the joma for the next man to don it for his aliyah, I said, “I feel like I’m the guy putting the cape on James Brown as his concerts.”)

Tetzaveh, a parshah with a muted narrative drive, came alive for me. The joma had a heft and significance that reached back thousands of years. Our ritual delivered a very tactile sensation, like touching a mezuzah on a door, lighting candles on Friday night or waving the lulav and esrog. Colors, movement, rituals with a physical dimension—I like all of that. The joma connected my friends and me with Tetzaveh in a visceral way. That, in Jonathan’s words, is a simcha.

The COVID mask, by contrast, goes back two years. I fervently hope its presence will recede into the past and not become permanent fixture in our lives. 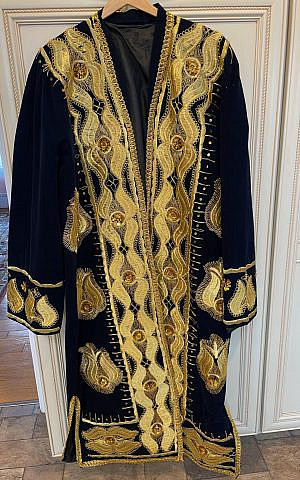 Front of the Bukharan Joma. Photo by Jonathan Khaldarov

The Bukharan joma left me with a warm feeling about Tetzaveh. I’ll always associate it with both the Bukharan robe and the simcha of the end of the New York mask mandate. The joma went on, the mask came off, that cannot be merely a coincidence. And I don’t need to consult the Urim and Thummim to tell me that.