Hazan Haim Mizrahi, a montage of a cantor.

Hazan, also known as a cantor, is a leader in religious or sacred Jewish affairs. He is the official of a synagogue who conducts the liturgical part of the service and sings or chants the prayers intended to be performed as solos.

For the past 25 years Hazan Haim Mizrahi has been the cantor of the Sephardic Temple Tifereth Israel in Los Angles.

This past week, during the holiday of Hanukkah, at his Temple, Hazan Mizrahi’s congregation has honored him, in a gala event to show how grateful they are for the long years of service he has performed at their synagogue. In those years they all became his family. 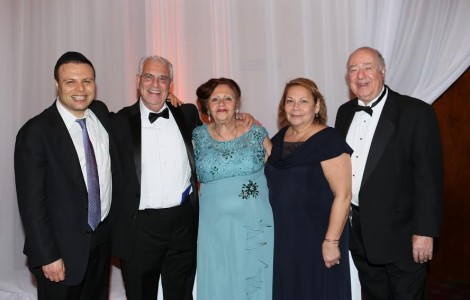 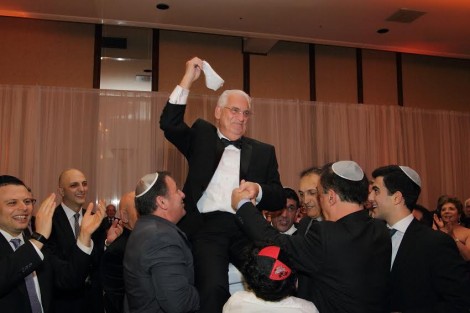 Hazan Mizrahi lifted by guests, what a celebration-Photo Michelle Mivzari

Born in Istanbul, Turkey, to Esther and Isaac Mizrahi, Haim’s career started at his bar-mitzvah when his pleasant voice was first discovered.
After he graduated from the Cantorial School in Istanbul, in 1962, he travelled the world and worked as a cantor.

Haim met his wife Rachel when she was 15 year old and they began dating with her parents’ blessing. “Back then is was acceptable,” he told the guests. When Rachel was 20 and he was 27 year old they got married in Temple Naveh Shalom in Turkey.

In 1971 the Mizrahi couple moved to Israel; in 1982 they moved to Chula Vista, California, where Haim studied to be a Mohel, a Jewish person trained in the practice of brit milah, the covenant of circumcision, and in 1990 he started his quarter century career at Sephardic Temple Tifereth Israel, which became his home. He has led programs, taught children and has been constantly preserving the rich Sephardic heritage and the Ladino tunes.

Thousands of boys have studies their Bar-Mitzvah Haphtarah and Bat-Mitzvah portion with Hazan Mizrahi; thousands others have passed through his Mohel hands and to many more he taught Torah. His passion and love of teaching the Torah has rubbed on every student he has taught as well as his or her family members. 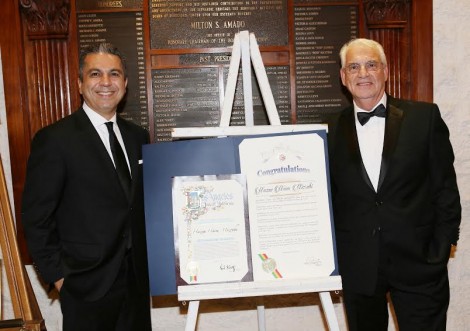 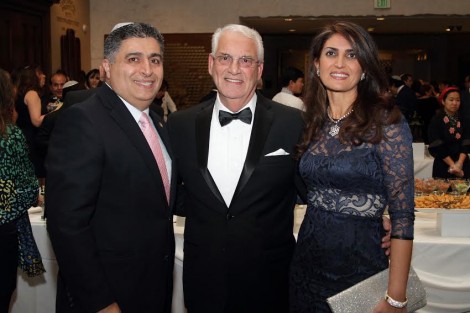 You do not stay a cantor for so long unless you are good at what you do. Listening to a parade of praises that evening, it is clear that Hazan Mizrahi is very good at what he does.

With a man who has devoted his life to advance Judaism just one notch closer to Hashem-the Lord, with a voice that lifts the spirit, the heart and the soul of everyone in the synagogue, the members of Sephardic Temple Tifereth Israel are one lucky congregation to have Hazan Mizrahi putting his indelible mark on them.

As one of the guests said, Hazan Mizrahi’s spiritualism, professionalism, dignity, respect, education, devotion, kind heart and angelic voice, opened the gates of heavens to the congregation’s prayers. We wish him many more years of his blessed heavenly craft.