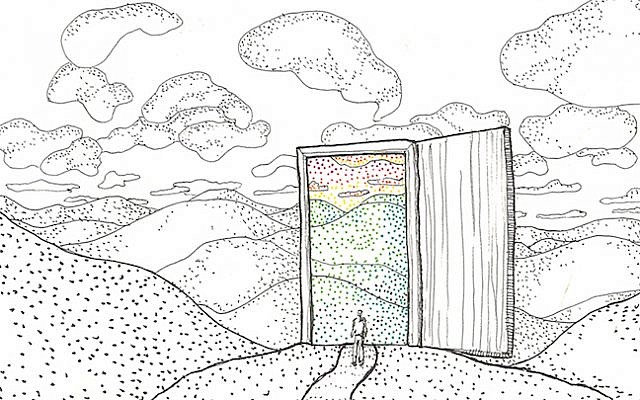 Jerusalem, 22:43 at night.  Distant traffic hum, still awake from its coffee break.  After New Year’s delights, weariness sets in with days of contemplation ahead before the day of reckoning.  Soon the cars’ murmurs will subside, leaving only the sound of cool swirly winds and a few flickering moths that have managed to fly into to my humble abode.   They find a home in the pile of unread articles, slowly drumming their wings against the creased paper, a ritual before they sleep.

Of late, many rectangular buildings have appeared.  They sit in silence surrounded by dust and no trees.  The wind ventilates them and then rests.  Jerusalem closes up for the night, except for an occasional ambulance sometimes traveling north, sometimes south. A faint shofar is sounded in the distance. Luckily there are tree-line neighborhoods with endless voices of the wind through thin green branches.  In the night hours it is easier to hear the trees than to see them. 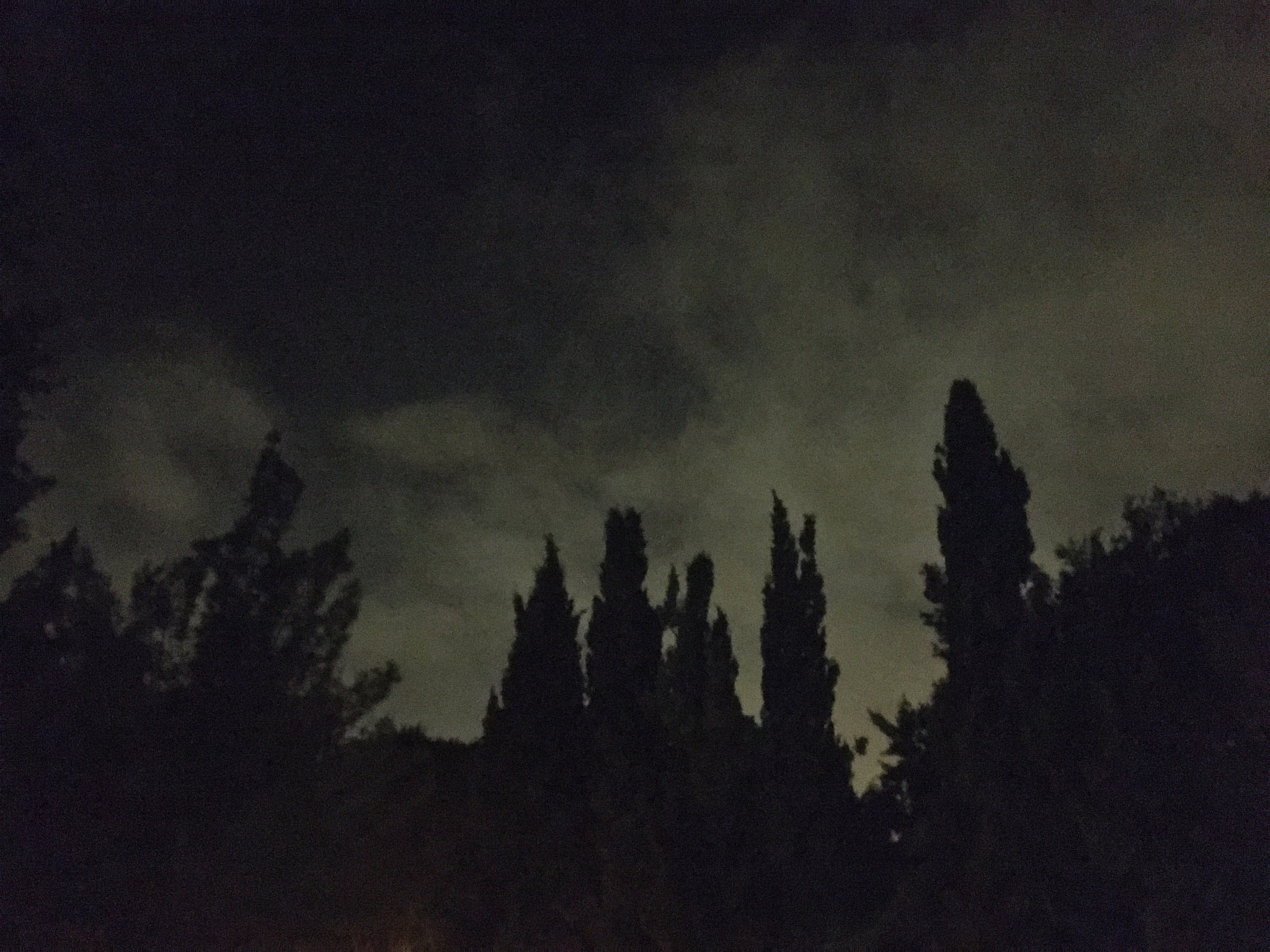 Jerusalem at night (photo by the author)

Early morning, 5:55 am.  A fridge hums from three simultaneous directions.  It’s the acoustics of a space that mimics a cubist painting. Unfortunately, tinnitus plagues me. The cure? Ignore it.  Soon a lone crow cry cuts the air–a duck replies; one by one the birds converse in two and three-quack phrases unless a leader emerges, like a famous Pavarotti.  Soon waves of calls slowly jug their way, spewing out wavy timbrels, then suddenly interrupted by complete silence, like the minutes after a tsunami or the eye of a powerful hurricane.

Jerusalem can be quaint, but its many layers are rooted time past and are continuously revealed.  Likewise, the layers of sounds around us are often hidden but if one listens carefully they are revealed.  Unfortunately the growing pains of a modern city built on ancient soil often blind us from the mystery that hides behind the porous doors.

A kilometer up the road opera birds sing long arias, complex, delectable and most often unrepeatable.  In their morning feast they present their virtuoso solos while small bird bunches respond with choir-like ether, the sounds of elation! 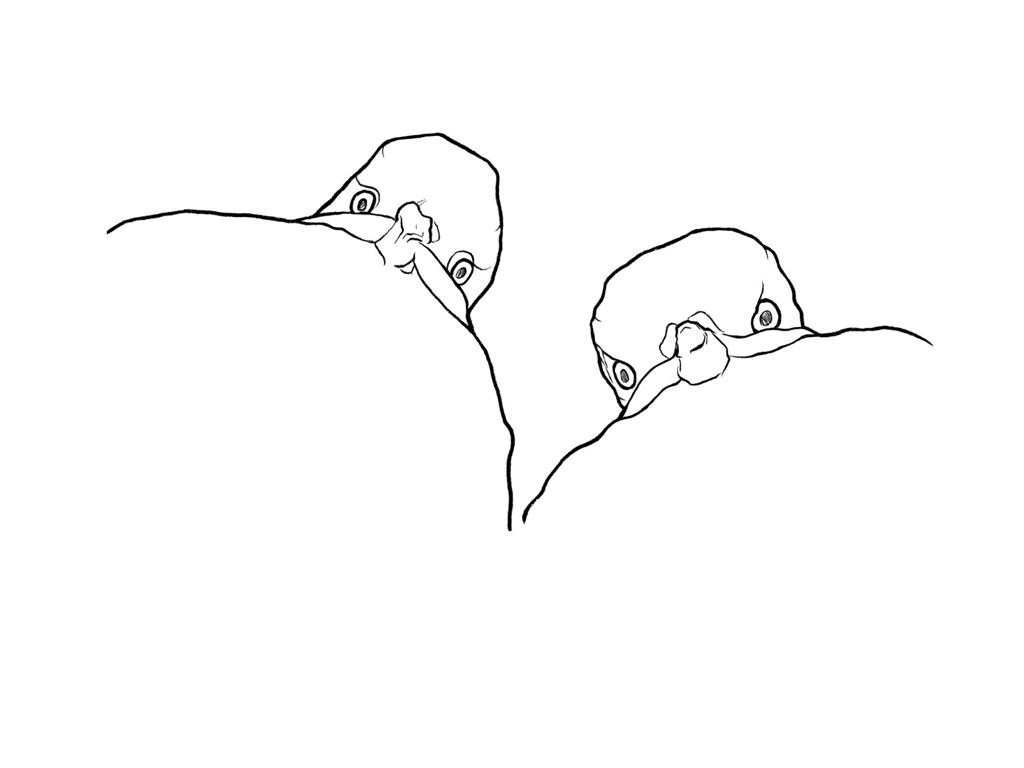 In the newer Arnona neighborhood they have “quackers”, birds that utter strings of piercing staccato notes, most often using only one pitch, a sort of teru’ah effect.  From all corners of the trees they “talk” in rough tones, knife-like ones and fuzzy ones, tingling and ringing.  While all this accumulates, one of the “choir’s” virtuoso sings a full melody, a rarity in this style.  These “conversations” continue into the early morning.  One by one morning cars pull out of their driveways; they grunt and then disappear.

There are other familiar but mysterious sounds.  With all the mid-morning cacophony, a distant moazin’s voice is like a solitary streak of thin-ribbed sounds laced with pregnant silences for the listener to mentally “breath”.  A conspicuous duck suddenly spices up all the others.  The realization that it is possible for humans to “dialogue” with these creatures does not require a call to the local infirmary!

The nobility that is Jerusalem is felt much more at it’s epicenter, the Old City.  The endless fragrances, textures, tastes are joined by its sounds: finjan clanks, pleas from barkers, waves of high-decibel arguments…such is the custom.  Walking deeper through Jerusalem’s alleyways, working sounds of hammering and spinning ooze from all corners.

Jerusalem has many mysterious corners that evoke equally mysterious sounds, like the tunnel of trees in the Liberty Bell Garden and the sculpture James Turrell entitled  “Space that Sees” located in the Billy Rose Sculpture Garden (Israel Museum). In the garden there is a sense of quietude that the man who designed in (the legendary Isamu Noguchi), wrote that wanted to create an Acropolis of the Middle East, where Jerusalem’s citizens could find respite and peace. Such a quietude can also be found “Emek HaMazlavah”, adjacent and below the Israel Museum. 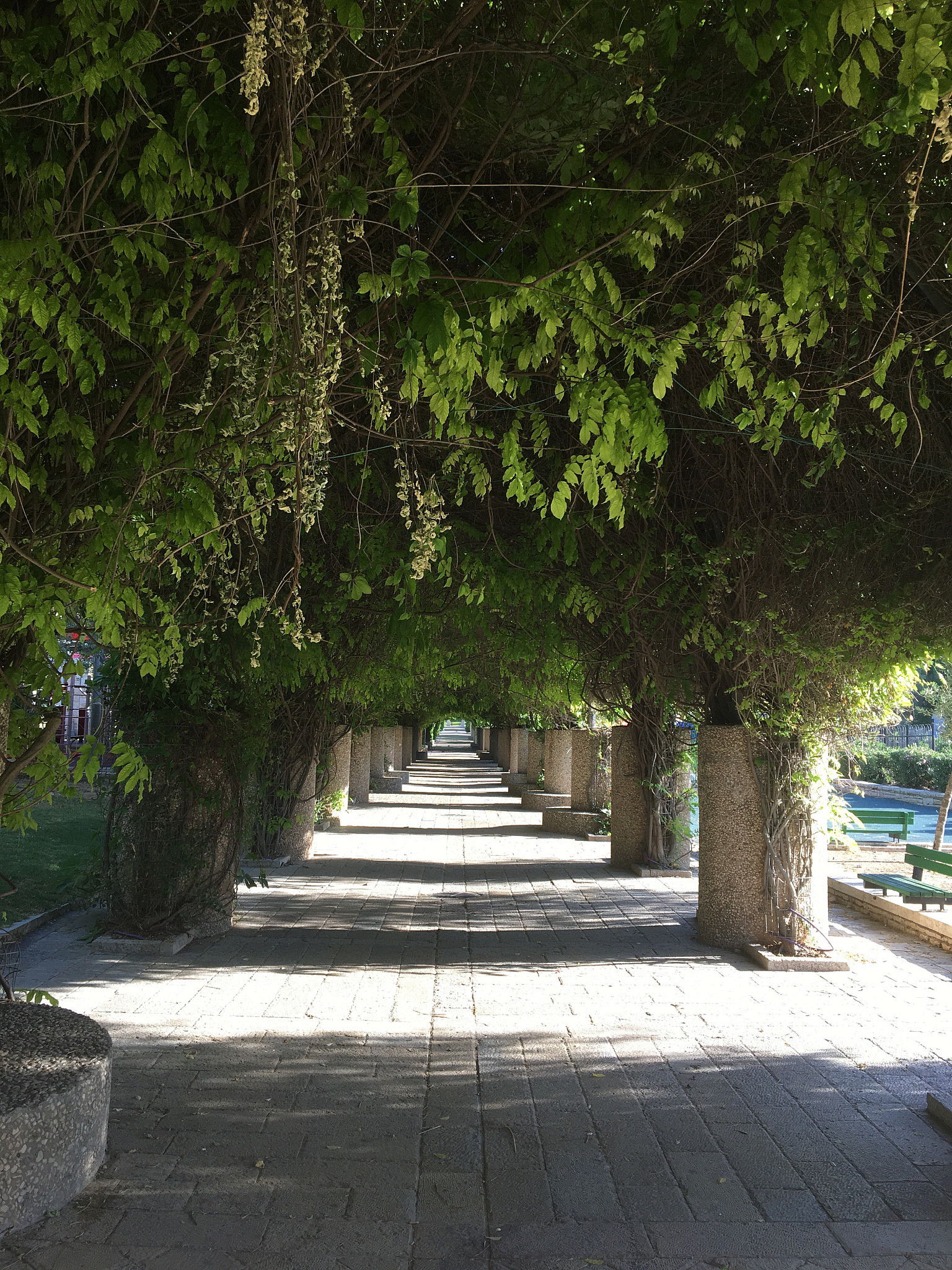 Tunnel of Trees (photo by the author) 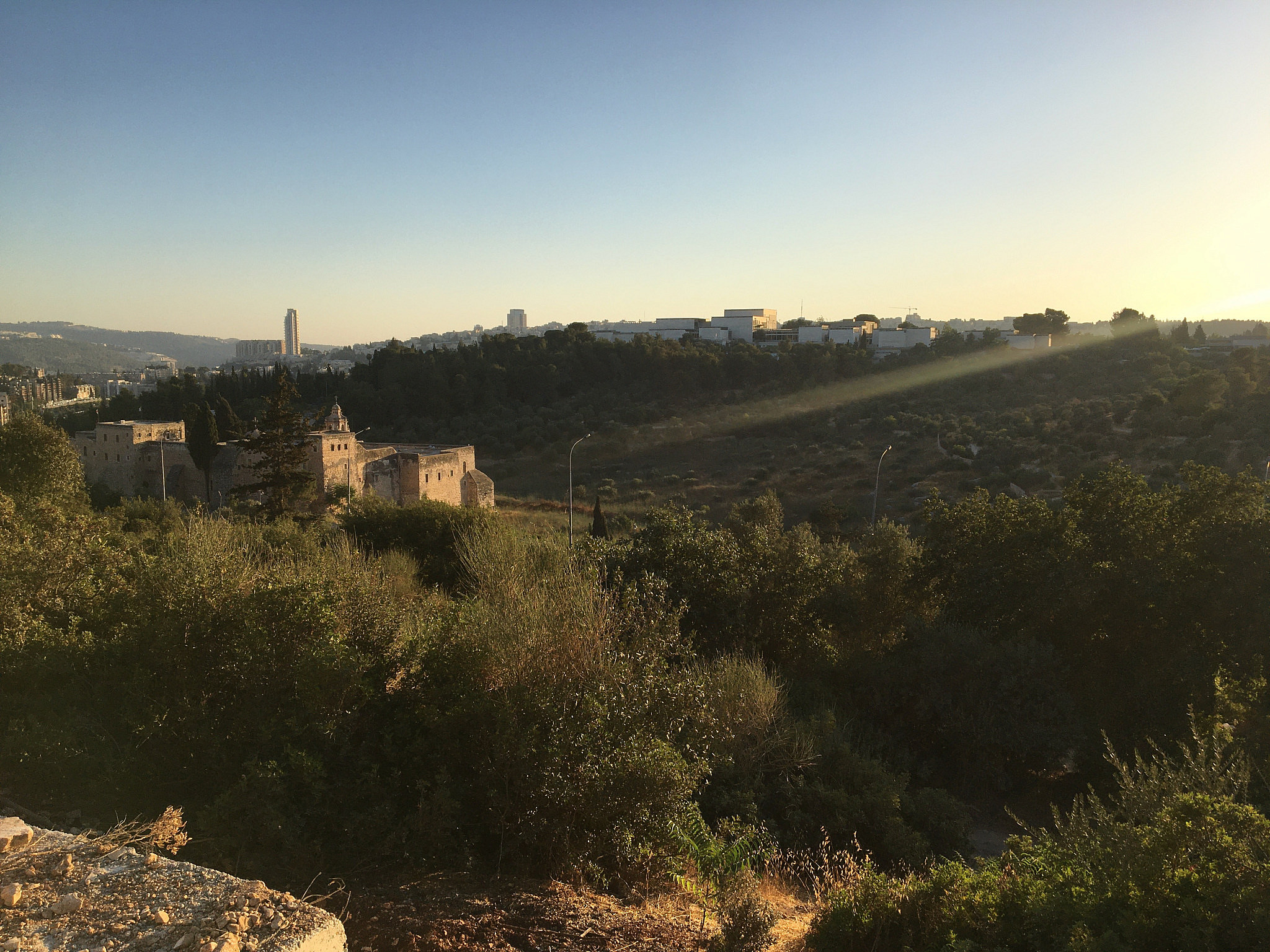 But then the mundane returns! Waking to fridge sounds, but then treated to waves of bird communication is like looking at Mount Zion through dark strands of wires.  So it is with Jerusalem’s sounds.  If one tries, it is possible to mentally strip away the “wires of progress” like a magic cure for tinnitus.  It is actually possible to sense the  illusive but endless sound essences weaving throughout the city, especially as an antidote to its modern cacophonous complexity.  If one closes one’s eyes, it is possible to hear Jerusalem’s landmark sounds: bells, chants, wooden ouds, suk chatter, sirens–all blended into one glorious collage, sometimes faint, sometimes glowing. 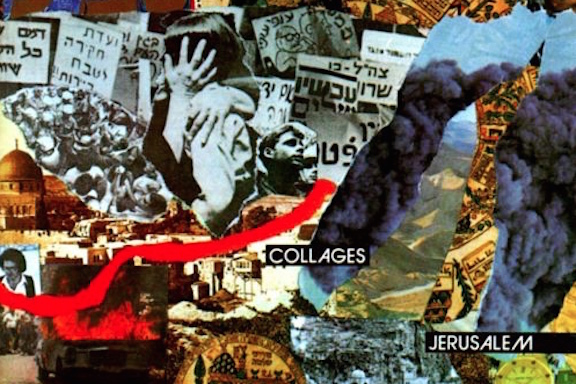 It’s now 7AM.  Toward the west, city sounds are felt more.  Fridges fade and streams of cool morning air flowing at different velocities, and like King David’s harp, gently stroking the body and soul.  In the distance the din of business cranks but becomes tolerable like a soft drone of om‘s.

As the city awakes its rapid expansion is something to both praise and curse.  Pockets of raw-wrenched metal squawks cut through at deafening decibels, presumably the “price of progress”.  The public is most often unaware of the damage high-density, monotonous and blaring deep-toned sounds is not only torturous but a severe health hazard to all age groups.  (This blog also intends to explore this topic in future months).  After a while, the metal becomes blurred and fades, revealing distant wooden ouds gracing the morning.  Jerusalem’s multi-color sky is a portrait of a city with infinite array of sonal wonder and endless sound adventures. 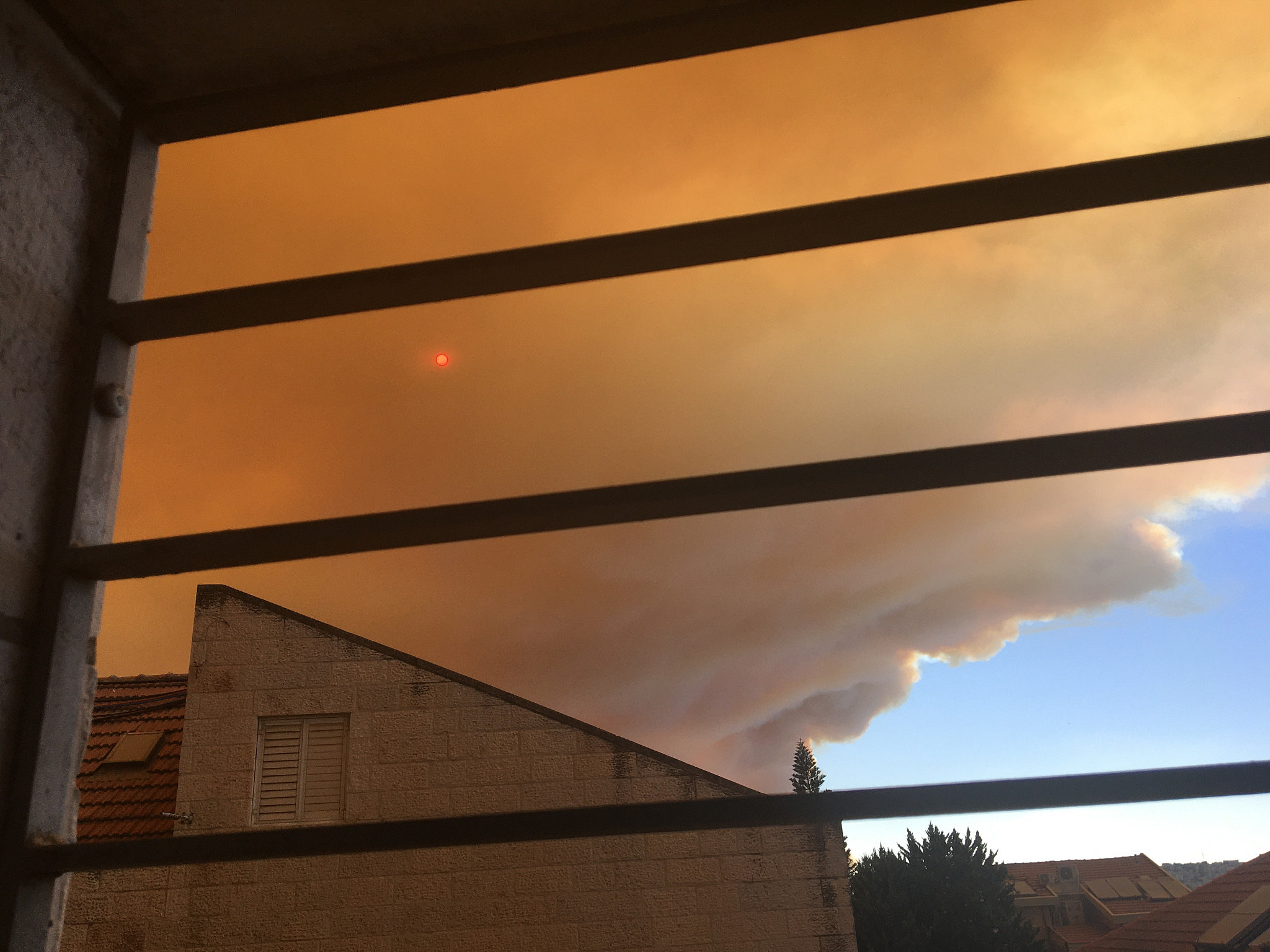 About the Author
Stephen Horenstein is a composer, researcher and educator. His repertoire of musical works has been performed and recorded worldwide. He has been a recipient of the Israel Prime Minister's Prize for Composers and the National Endowment of the Arts (USA). His teaching has included Bennington College, Brandeis University, Tel Aviv University, Jerusalem Academy of Music and Dance; residencies at Stanford University, York University, California Institute of the Arts, and others. He is Founder and Director of the Jerusalem Institute of Contemporary Music, established in 1988 to bring the music of our time to a wider audience.
Related Topics
Related Posts