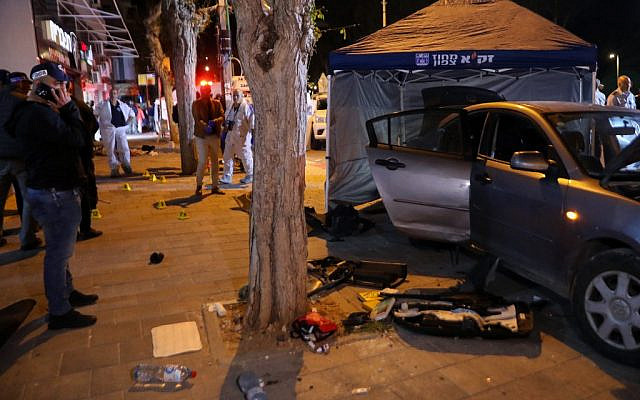 Israeli security forces near a car suspected to have been used by two terrorists who carried out a deadly attack in Hadera on March 27, 2022. (GIL COHEN-MAGEN / AFP)

The horrendous recent assaults by Palestinian religious extremists in Beersheba, Hadera, and Bnei Brak have touched upon already raw nerves, raising a combination of anxiety, fear, anger, and even hatred not only among Jews, but also among Palestinians in the entire area between the Mediterranean and the Jordan. For all involved, these events have appeared at first glance to be a latter-day recurrence of the dreadful days of the Second Intifada now marking its 20th anniversary — although the consequences have been quite different for each community. The present Israeli government, the mainstream media, and the majority of social networks have mobilized quickly and unequivocally to combat what they term “the new wave of terror” unleashed at a particularly sensitive time this year, when Ramadan, Passover and Easter overlap.

Two assumptions underlie this approach. The first is that the circumstances of today are similar to those of 2002. They are not. The second, and much more fundamental, is that subduing terror will achieve security. If anything, past experience has proven time and again that the use of force to quell terror only invites more extremist forms (as in the involvement of ISIS sympathizers in the latest attacks). The key question that must be addressed now, before it is too late, is therefore how to achieve security in a palpably explosive situation.

The beginning of the answer lies in some of the obvious — albeit superficial — features, of current events. The most notable may also be the most significant: Palestinians have been the assailants and the heroes; the victims as well as the perpetrators; the killers and the healers. Even though politicians and opinion-shapers on all sides have pounced on the opportunity to capitalize on the tragic occurrences to buttress their own positions and consolidate their bases, a special effort has been made by some, with the backing of large segments of civil society, to calm tempers and quell the violence. This trend is visible in the main news broadcasts: the male-only panels of ex-generals and security experts is being supplemented with more varied participants with differing viewpoints. These are just preliminary signs that there may be a growing understanding that the techniques of yesteryear may no longer be applicable to present circumstances.

These external shifts point to several deeper changes that have taken place since the beginning of the present millennium, when the United States was dominant globally and in the region. The most widely noted change relates to the blurring of boundaries and its consequences. The Israeli campaign against the organized and violent Second Intifada (2002-2004), which effectively reinstated Israeli military control over the major Palestinian cities in the West Bank, also totally eclipsed the Green Line. Even though the “security barrier” constructed at the time was meant to keep Palestinians separated physically from Israel, it in fact brought them more directly under Israeli control. A not dissimilar process occurred with the disengagement from Gaza, which brought about both Israeli withdrawal and increased Israeli control over all movement in and out of the Strip.

Benjamin Netanyahu’s policies during the second decade of this century further cemented this pattern, culminating with the American recognition of Jerusalem as the capital of Israel and the signing of the Abraham Accords, which completely bypassed the Palestinians. The security cooperation with the Palestinian Authority may have bought Israel a semblance of quiet, but it also subjected all Palestinians to an Israeli regime that extends to the Jordan River. By 2021, Israeli-Palestinian relations were internalized. Nothing demonstrated this more than the May riots which, ignited in Jerusalem, quickly spread into the West Bank, and into direct clashes between Jews and Arabs in Israel’s mixed cities. For almost a year, this new reality has been the order of the day.

An allied process has taken place in the economic sphere, with the entrenchment of a neoliberal policy which favors an extreme free market model introduced by Netanyahu as minister of finance in Ariel Sharon’s government in 2003 and later fine-tuned during his subsequent tenure as prime minister. The essence of this approach was not only the withdrawal of the state from its social welfare responsibilities, but also its channeling into private hands. This led to growing inequalities on the one hand, and to select payoffs to political supporters on the other. It also propelled the quest for economic partners regionally and internationally. At the same time, however, it increased the need for Palestinian labor (also from Gaza) and greatly encouraged the incorporation of Palestinian citizens of Israel into the workforce.

The outbreak of the COVID-19 pandemic demonstrated the extent of the intertwining of Palestinians in the Israeli economy — most notably in the medical sphere, but also in a variety of high-end professions and service roles. This economic interdependence can no longer be ignored, even though severe systemic inequities persist.

These trends have also been apparent at the state level, with the increased tendency to promote privatization under the guise of granting greater freedom. The construction of outposts is one example. The privatization of checkpoints is another. The sufferance of armed individuals — and even militias — and their present official encouragement by Prime Minister Bennett and some of his ministers serve as yet one more vivid instance of this tendency. State guidance for such freedom hides the fact that it comes at the expense of the capacity of the state to control violence. It also is antithetical to democratic norms both on the individual and collective levels. Recent events in the Israeli-Palestinian context are but a stark reminder of such lessons in places such as Ukraine, Hungary, Myanmar, and Ethiopia.

Inevitably, the upshot of these changes has influenced social relations, often in diametrically opposite directions. Social divisions, frequently fueled by those in power, have intensified and become more venomous. What was unacceptable only a few years ago — outright racism directed at non-Jews — is shrugged off, if not cheered during dark days. Yet there is a greater willingness to entertain notions of a shared society and many more initiatives to promote inclusion and interaction. What has become even clearer in this regard is that these attempts cannot be constructed on the perpetuation of Jewish hegemony; they must be built on the values of equality, equity, and tolerance for diversity. Security in the full sense of the term — for individuals, for communities, for national groups — depends on their realization.

This leaves very difficult, and different, options. The present circumstances, with all their confusing and crosscutting elements, indicate that continuing on the present course means making a choice that would force Israel to clamp down even more on Palestinians in the West Bank and Gaza. Some observers go a step farther, suggesting that such a path would lead to the forced transfer of large numbers of Palestinians and to the full institutionalization of a Jewish apartheid-like regime. In either case, in the process, Israel would sacrifice its security, what remains of its democracy, and its raison d’etre: its claim to represent the Jewish people and its traditions.

Another possibility is to muddle along, slowly tightening the now porous security barrier and relinquishing a measure of political control over the Palestinians. However enticing this option, it remains a delaying tactic — postponing grappling with realities on the ground and failing to deal with the sentiments and demands of over 20 percent of the country’s citizens.

The most rational and moral option requires the greatest attitudinal change: the conscious construction of a value-driven shared society which gives space for all within the pre-1967 boundaries, recognizes Palestinian self-determination in the occupied territories, and constructs a series of mechanisms to incorporate the interdependence that has developed over time, as initially suggested by the Land for All Movement. This is something between a one-state and a separation-based two-state solution, now advocated by proponents of a variety of confederal models. Such an option cannot move forward without the many diverse initiatives that have evolved recently on the civil society and economic levels, and more hesitatingly on the political one as well.

This is a prolonged process. The seeds have been sown. The willingness, according to recent studies (especially by the aChord Center at the Hebrew University) is greater than previously imagined. Now what is needed is the will to move ahead, both for individuals and policymakers. This may be the only way to simultaneously define collective goals and face an explosive reality. In the interim, any action for those seeking to find a lasting and equitable arrangement must be guided by the motto of doing no harm to the chance of achieving this objective.