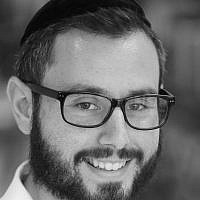 The Blogs
Mordechai Gershon
Apply for a Blog
Please note that the posts on The Blogs are contributed by third parties. The opinions, facts and any media content in them are presented solely by the authors, and neither The Times of Israel nor its partners assume any responsibility for them. Please contact us in case of abuse. In case of abuse,
Report this post.

A square on the wall, a conversation with a Palestinian, and my hope for the future

We recently had a Palestinian contractor come over to do some work in our home.  As he entered, he noticed the amah by amah (approximately 48 cm sq.) space on our wall that was intentionally left unfinished, and inquired about the strange sight.  Not sure exactly what to tell him and how to tell him in a politically correct way, I simply told him the truth that this unfinished piece of our house reminds us of the tragic destruction of the Temple, God’s house, that occurred nearly 2,000 years ago.  It reminds us of our inability to connect to God in the deepest way and the inestimable loss of Jewish lives at the hands of the Babylonians and then the Romans when the two Temples were destroyed and the Jewish people exiled to foreign lands.  When I see this unfinished piece of my home, I remember that something is missing, and I yearn for the day when it will return.

As the words came out of my mouth, I began wondering what this man was thinking.  Was he insulted by my (Judaism’s) desire to restore the Temple, whose location is under the Dome of the Rock, to its former glory?  Does it really matter anyway if he was insulted by my Jewish identity, history, and presence?  This raised another question in my mind.  Has our desire to be politically correct and our hyper-sensitivity to the political feelings of others obscured or erased our Jewish identity and the truth that our people has been longing and praying for the rebuilding of the Temple since its destruction nearly two thousand years ago?  A third question now permeated my thoughts.  Do I really yearn for the Temple when I pray for it three times a day or when I recite Birkat HaMazon following a meal or when I watch a groom break the glass under the chuppah? Have these symbols of our national loss and our hope for the Temple’s return just become empty acts of habitual tradition?

To my surprise, the contractor seemed to listen with acceptance as I described the Temple as a house of prayer where all people can come to recognize and talk to Allah, or as we refer to God – Hashem.   I told him that we believe in the same singular Creator and that we Jews want a singular place where all people can come to connect to Hashem.  Isn’t this an aspiration that both of our religions hold dear?  The Temple is not a synagogue, nor is it exclusively for Jews.  It transcends the function of a synagogue and the exclusive needs of the Jewish nation.  While it is ministered by the Jewish people and, specifically, by the Kohanim (priests) and Levites, it is God’s house and all people are invited to visit in order to experience the ultimate feeling of closeness to Hashem.  The Temple is not about the Jewish people, but about humanity and its relationship with the Creator.  He seemed to be in agreement, although we didn’t discuss the actual location of the Temple on the Temple Mount or the fate of the historic Dome of the Rock.  I didn’t want to take the conversation in that direction.  I don’t have any answers to this religiously and politically complicated question.

I learned two things from this encounter.  The first is that there is a degree of agreement that can come about when two level-headed people can engage in respectful dialogue.  If only dialogue between people and nations was possible on a greater scale!  The second is that the customs that are meant to remind us of the Temple’s destruction and our eminent hope that it be speedily rebuilt should not become rituals whose meaning is forgotten.  “If I forget thee Jerusalem…”  The Jewish people have finally begun to return home to Israel and its ancient and modern capital of Jerusalem after millennia of bloody exile.  The People of Israel and the Land of Israel have been resurrected; their dry bones once again rejuvenated into a strong and multi-faceted body.  Politics are indeed complicated and we have a wide spectrum of people living in this diverse country with many voices that need to be heard.  However, we must also never forget what Jerusalem is supposed to be and what it must include.  We must work harder so that one day the prophecies of Isaiah that “nation shall not lift up a sword against nation, neither shall they learn war anymore” (Isaiah 2:4) and that God’s house will be called a “house of prayer for all people” (Isaiah 26:7) will be realized in peace and love for all people and our common Creator.

About the Author
During the last decade, Mordechai has been deeply involved in Jewish communal work and Jewish Education. He loves studying and teaching Torah, as well as traveling throughout Israel, studying Jewish history, learning about archeology, and enjoying the various cultures and landscapes of Israel. Mordechai and his family made aliyah several years ago and are proud to call Israel their home.
Related Topics
Related Posts
Comments