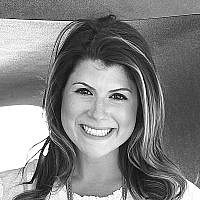 The Blogs
Marissa Schiff Rosenberg
named my daughter golda, interpret as you will
Apply for a Blog
Advertisement
Please note that the posts on The Blogs are contributed by third parties. The opinions, facts and any media content in them are presented solely by the authors, and neither The Times of Israel nor its partners assume any responsibility for them. Please contact us in case of abuse. In case of abuse,
Report this post.

I am incredibly late to the “A Star is Born” movie bandwagon starring Lady Gaga and Bradley Cooper. As people often say, “better late than never” and in this case that couldn’t ring truer. I had a weird day, some spare time, and the desire to go see a movie. So I went and of course was unable to escape my own thoughts. The movie is about a lot of things. It is about addiction, difficult family relationships, friendship, falling in love, suicide, and a nose. What I fixated on for the duration of the film was something entirely different. Somewhere in the beginning of the movie, Jackson, the troubled star musician says to his new muse and future wife Ally, “Unless you get out there and try to do it, you’ll never know. That’s just the truth. If there’s one reason we’re supposed to be here is to say somethin’ so people wanna hear it. So you gotta grab it and you don’t apologize. You don’t worry about why they’re listenin’ or how long they’re gonna be listening for. You just tell em what you wanna say.” In the film Jackson gives Ally a voice and the powerful opportunity to use it for good. In the beginning of the film you see her true talent showcasing her powerful lyrics as a songwriter. As the movie goes on you see Ally slip away from who she really is while Jackson remains supportive as her career takes off. Jackson realizes immediately that she is betraying herself as she transforms into the performer that some famous producer wants her to be. She knows it too but continues on the path until ultimately it is too late. He “brought her to the dance” and she seemed to be able to silence the truest part of herself and where she came from. Ultimately, at the end of the movie, we see the tragic toll that those decisions took.

You never know who will give you a stage in life and you’re lucky if you have something powerful to say once you’re there. Plenty of people have wonderful ideas to share with the world and never meet that one person or have that one moment that opens an unexpected door for them. For me, that “person” was the Birthright Israel Foundation. The visionaries of that program unknowingly gave me the experience to put words to. In this politically correct world where it is unpopular to voice certain opinions, I challenge you to join me in trying to find a way to express yourself creatively and positively. If you have something positive to say or share about Israel, about our collective Jewish history, or about our traditions, join me and speak up. Do something. Don’t be afraid to share what you are proud of or speak up about what is completely intolerable. I almost guarantee that you’ll create a stage for yourself that you didn’t even know was possible. The deafening silence of creativity and positivity of likeminded people is blaring and I do not believe that it is due to apathy. After a lot of thought, I have concluded that this climate of political correctness has silenced so much potential in the pro-Israel community. How is it possible that in this politically correct world that demands constant tolerance people can be so intolerant?

Recently, an acquaintance of mine from summers spent at Camp Chi in Lake Delton, Wisconsin sent me a text message that reinforces my call to action. This person is not the first person who has contacted me out of the blue letting me know that what I have to say, or post, has made an impact on them. Both people expressed to me that they couldn’t agree more with what I have to say or post but are too intimidated to join the conversation. While it is definitely flattering, it is also alarming.

Our very own Jewish star was truly born in 1948 thanks to so many that we owe so much to. We, the American Jewish community, currently have a very powerful stage to express ourselves on as Zionists. If you’re a Zionist, express yourself, because if the movie taught me anything, it is that you cannot count on the stage being ours forever. We need you. I need you. There is so much truth and so much good in who we are, who we have been, and who we have the potential to be as Jewish people. Step into the light that Hanukkah just recently inspired us to not only seek but to light ourselves.

About the Author
Marissa Schiff Rosenberg is a resident of Highland Park, Illinois. She attended the Francis W. Parker School in Chicago for high school and majored in History and Judaic Studies at the University of Michigan. The highlight of her educational career was the year she spent abroad studying at Hebrew University in Jerusalem. Additionally, Marissa earned a Master in Elementary Education from National Louis University. Marissa has worked for the Jewish National Fund, Jewish United Fund of Metropolitan Chicago, and as a 2nd and 3rd grade teacher at Arie Crown Hebrew Day School in Skokie, Illinois. She is currently a stay at home mom. When purchasing a pair of new eyeglasses she often looks to former Prime Ministers of Israel for inspiration.
Comments