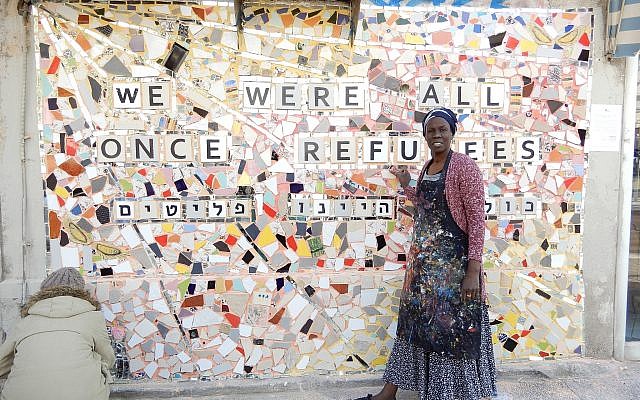 Illustrative: Lina, an asylum seeker from Sudan, with the finished mural on Rothschild Boulevard in Tel Aviv on February 21, 2018. (Melanie Lidman/Times of Israel)

There are two main claims which dominate discourse in the Religious Zionist community concerning the deportation of “infiltrators.” First, that the welfare of the suffering residents of South Tel Aviv is more important than the welfare of strangers who came here illegally. And secondly, irrespective of South Tel Aviv’s predicament, this group of Africans presents a demographic threat to the Jewishness of the state which demands a solution.

But the strange invitation with which we begin our Seder night, the night of the formation of our national identity, carries a deep message which the Religious Zionist community ought to be especially sensitive to in relation to these two claims. “This is the bread of affliction which our forefathers ate in the land of Egypt. All who are hungry, come and eat!” Come and eat our poor man’s bread, we call out! Come share our slave food! Why do we extend such an uninviting invitation? What does it mean?

What this statement contains, Rabbi Jonathan Sacks suggests, is the true test of freedom. The slave mentality is about survival in a world of scarcity, and this is a mindset to which even a rich person can remain enslaved. To be free is to be willing to share, to adopt a mindset of bounty, so that even if all you have is poor man’s bread, you are still willing to turn to someone who has less and invite him to partake.

It’s not a coincidence that this is the theme with which we begin the seder. The Hasidic master Rabbi Tzadok HaKohen of Lublin taught that in order to understand the root of any concept in the Torah, one must examine the first time which it appears. The very first mention of matzah in the Torah is found in Genesis Chapter 19, in the context of hosting strangers. Lot invites the angels into his home, offers them shelter, and “he did bake matzot, and they did eat” (Genesis 19:3).

This unusual act of hospitality arouses the ire of the locals. “This one came to live among us and judge us!” (19:9) Who is this liberal with his foreign value and customs of allowing strangers into his home? Doesn’t he know that “the poor of your community come first”? In Sodom, compassion for the stranger was considered to be an act of cruelty towards society, an unfair investment of local resources in undeserving outsiders. But Lot received his education in the house of Abraham, who taught “his children and his household after him to follow God’s path of doing righteousness and justice” (Genesis 18:19).

Thus, what lies at the root of the idea of matzah is an act of compassion to the stranger, an act of protest against the Sodomite philosophy which condemns this compassion as cruelty. The philosophy of Pharaoh echoes the same thinking. “Behold, the nation of Israel is greater and more powerful than us. Let us outsmart them, lest they multiply, and if war comes, they will join our enemies” (Exodus 1:10). Even if the stranger does not pose a demographic threat now, one who adopts a scarcity mentality will fear for the future, and even color current reality with those fears. If we allow them to stay, they will soon become the majority and change the character of the state! Our response to this narrow- heartedness is to begin our seder with a modest yet powerful invitation. Let all who are hungry come and eat!

Have we, as the prophet Isaiah said (Isaiah 1:9), almost become like Sodom? There are currently less than 40,000 human beings from Eritrea and Sudan who illegally crossed the Israeli border with Egypt, approximately 15,000 of them residing in underprivileged neighborhoods in South Tel Aviv. The great majority of them never had a real opportunity to submit a refugee claim, and the overwhelming majority of those claims that were submitted were either never processed, or rejected out of hand. In the thriving Israeli society of 2018, in which there are twice that number of legal migrant workers, as well as twice the number of illegal workers whose tourist visas expired, is there really no room to examine how many of these 40,000 ought to be granted refugee status? Is there really no room to grant temporary asylum to all those who deserve it, without it needing to come at the expense of the “poor of your own city”? Or are we still living with the slave mentality of scarcity?

Are we to act as Egypt did? Since completing the fence on the Sinai border in 2013, the Immigration Authority reports a drastic drop in successful infiltration, with not a single one occurring in 2017. Will the fear “lest they multiply” motivate us to deport people to what may be a life-threatening journey wandering through the desert in order to escape the dangers of their land?

We celebrate this Pesach on the eve of our celebration of 70 years of the miracle of the establishment of the state of Israel, the very fulfillment of the age-old prayer which follows our strange invitation. “Today we are here, next year in Israel. Today we are slaves, next year we will be free.” God’s grace, and Israeli ingenuity, creativity and commitment have, in 70 short years, created a success story of unprecedented prosperity. It is time that we free ourselves from our slave mentality, from the mentality of scarcity we have become so used to over our long exile, and embrace a redeemed mentality of bounty, the mindset of the children of Abraham, who extend kindness and welcome the stranger, who create a society of righteousness and justice.

The author is an activist with Lo Tasgir, a group adding a religious voice to the opposition to the planned deportation of asylum seekers. Thus far, the group has recruited a number of significant religious figures to voice their opposition, including Rav Avi Gisser and Elyakim Rubenstein. On Facebook: www.facebook.com/lotasgir