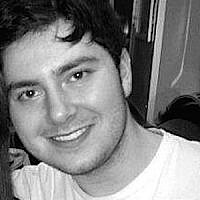 With the fall semester behind us, looking back on all of the wonderful activities and experience of the term is an enjoyable act. Hasbara York, York University’s completely student run Israel advocacy group, enjoyed one of its busiest three months so far, and looking back on the myriad of social, educational and political programming we’ve done, I am proud to have been involved, and I want to invite the general pro-Israel community to take a quick look at what we’ve accomplished so far this year. (Photos inside, press on the link in the title of each event to see the whole album.)

First things first: coming up with an original hashtag to exemplify this year’s theme for the club. We meet in the summer regularly to plan out the year and to make goals, and at the last meeting before school started we collaboratively came up with a new hashtag for the year. Its a way of branding the overall message of the club in a fun, memorable way. Last year we went with #PumpedForPeace, and this year’s slogan is #PeaceWithinReach.

#PeaceWithIn reach, which so perfectly expresses the desire for peace, understanding and co-existence, was the perfect message to bring to our first event of the year – YorkFest 2015! Each fall our student union organizes a host of clubs to table along side each other on the campus’ main Campus Walk. We had to be on campus at 8:00 AM to set up, but once we got the Hasbara swag gift bags on the table and the clock struck 10:00, we had a near constant stream of (mostly non-Jewish) students coming up to the table to sign up, grab some free bracelets and pens, and to learn about what we do on campus. The perfect way to start off the semester and the year! 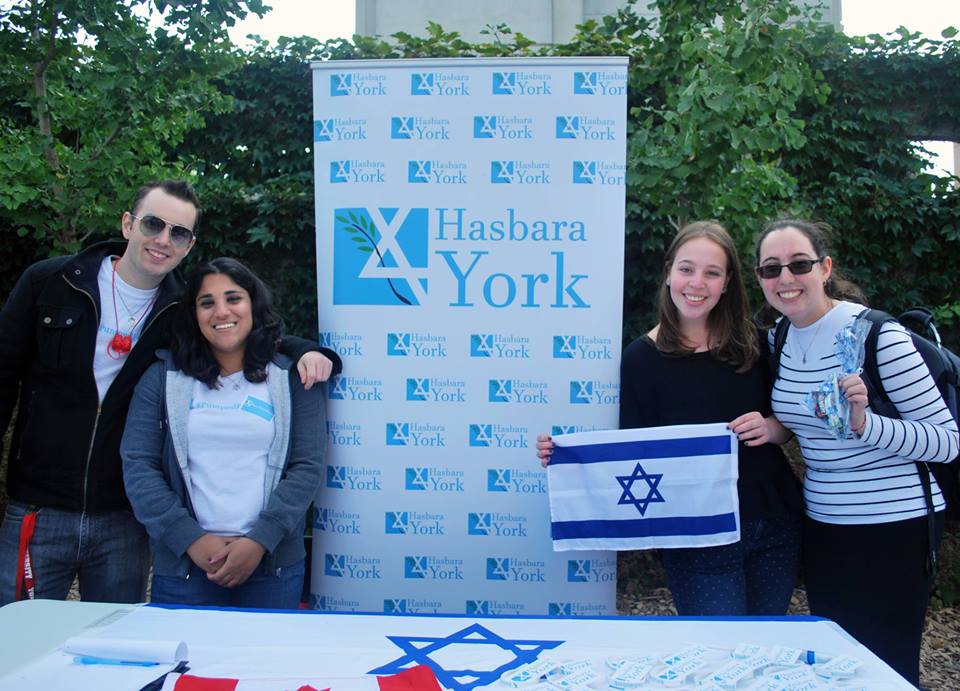 Not only were students from the general York University community eager to get to know our group and learn about the cause, they signed up! I think we must have filled out four complete sign-up sheets that day alone. Of course we didn’t table about just our club; YorkFest 2015 was a great way to generate interest in our very first speaker event of the year.

On October 8th we had the pleasure of hosting Eden Adler, a soldier in the Israeli army, and hearing him speak about his time serving in the IDF. Partnering with the Israel Student Association at York University and Hillel@York, we had a fantastic crowd who came to hear Eden’s “Conversations With an Israeli Soldier“. We also got to hear from our friend Hen Feder, an exchange student from Israel studying at Osgoode Hall Law School this semester.

Later that same day we went to hear him speak again at Aish HaTorah in the evening. Thank you Hasbara Fellowships Canada for bringing such a wonderful speaker to our campus! 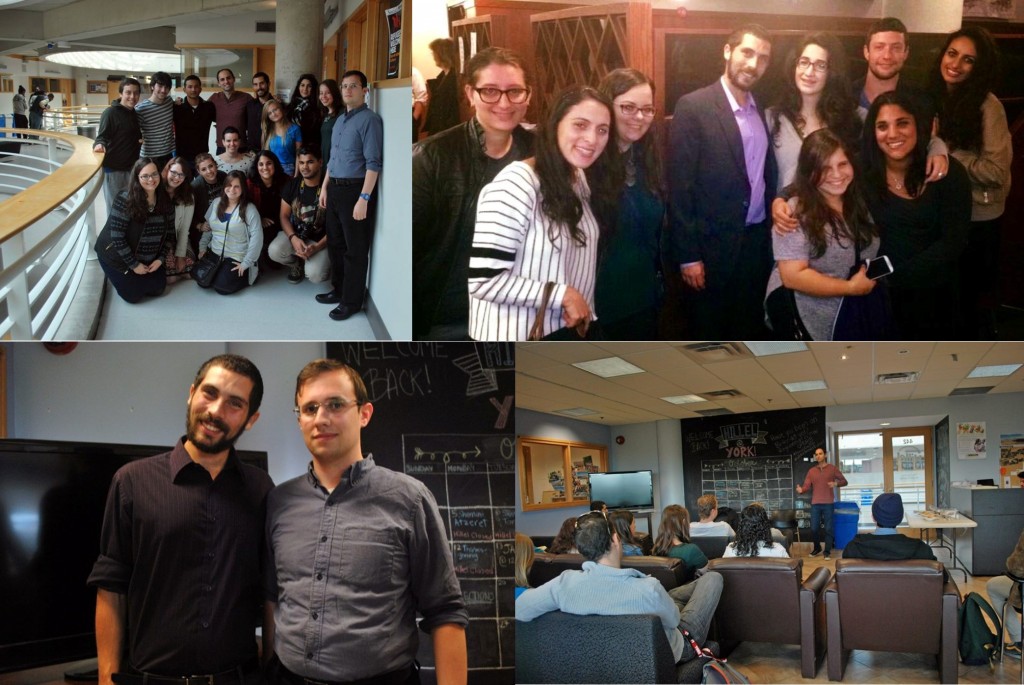 The week after we hosted the one and only Neil Lazarus, in collaboration with the Israel Student Association. We got an update about current geo-political affairs of the region, with a specific focus on ISIS and what Israel will do to secure its borders going forward. And of course despite the seriousness of the topic, Neil was as usual able to engage our audience with humour and wit. His talk, “Whats Next for the Middle East and Israel” was engaging, so thank you StandWithUs Canada for bringing us a speaker of such caliber. 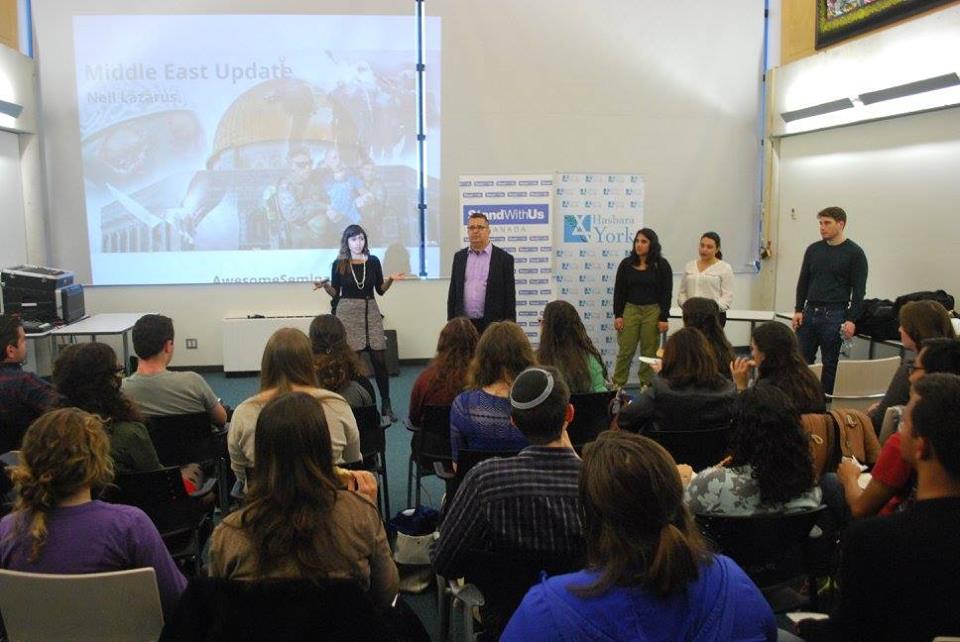 A Couple weeks later we went back to tabling. Personally I think its just a fun way to hang out with the Hasbara Crew, and the best is when friends from around campus come and say hi! During the first week of November we got out our Soda Stream machine to give out free samples to students. The whole story behind Soda Stream and its joint Israeli-Palestinian labour really ties in well with the message of co-existence we try to promote on campus. Plus, who can say no to a free drink? 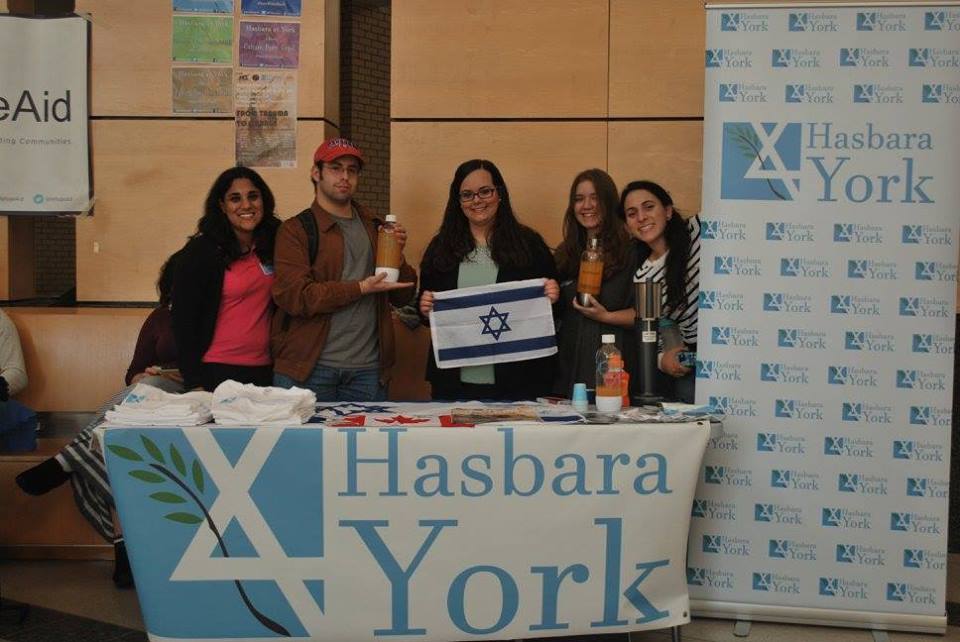 The three days of tabling was also a great way to advertise out next speaker event on campus. The next week StandWithUs Canada brought Hussein Aboubakr to our campus, an Egyptian dissident who had to flee his home country after enduring state-sponsored torture for simply investigating his neighboor to the west – Israel.

I had the pleasure to hear Hussein’s story at last year’s StandWithUs Israel In Focus conference, and his story really resonated with me. After his talk we generated some really thought-provoking questions and discussion about how Israel can go forward in building peace in the region, and Hussein imparted some advice on campus advocacy to us. 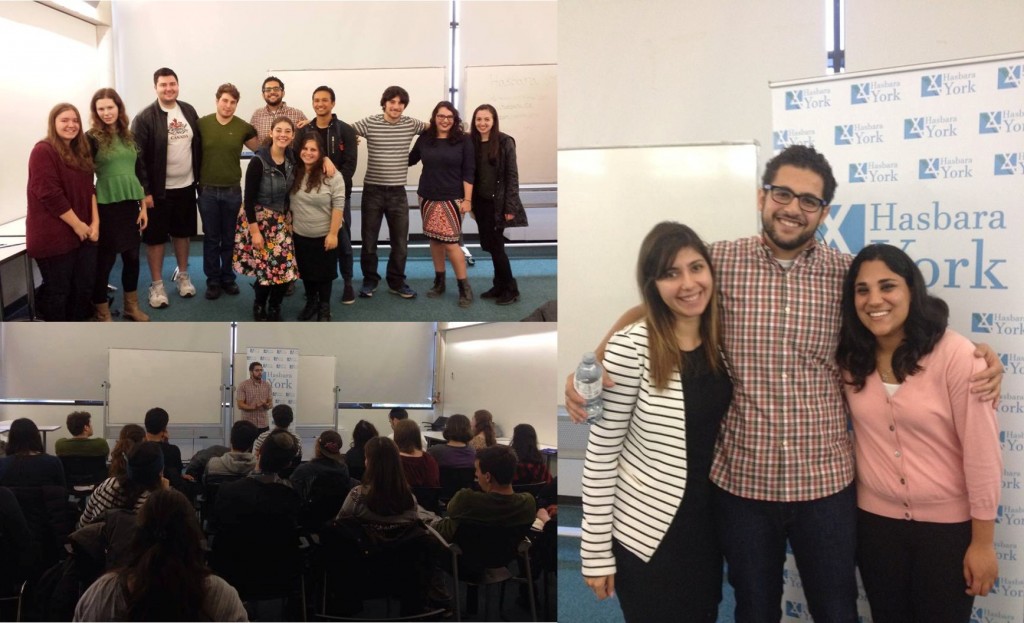 While thus far the semester was proving to be a successful one for HasbaraYork, in the background was the constant stories of Palestinian terrorism in Israel. Day after day stories of knife attacks dominated our Facebook news feeds, and even it home when a teacher from CHAT was murdered.

In response, during the course of November we initiated our “White Ribbons for Israel” Campaign. Students would attach a white ribbon to their clothes, take a picture, and caption it with “I stand in solidarity with the victims of terror because….. I believe in peace! #PeaceWithinReach”. Students who participated came up with their own reasons to stand in solidarity, and posted them in the event on Facebook. 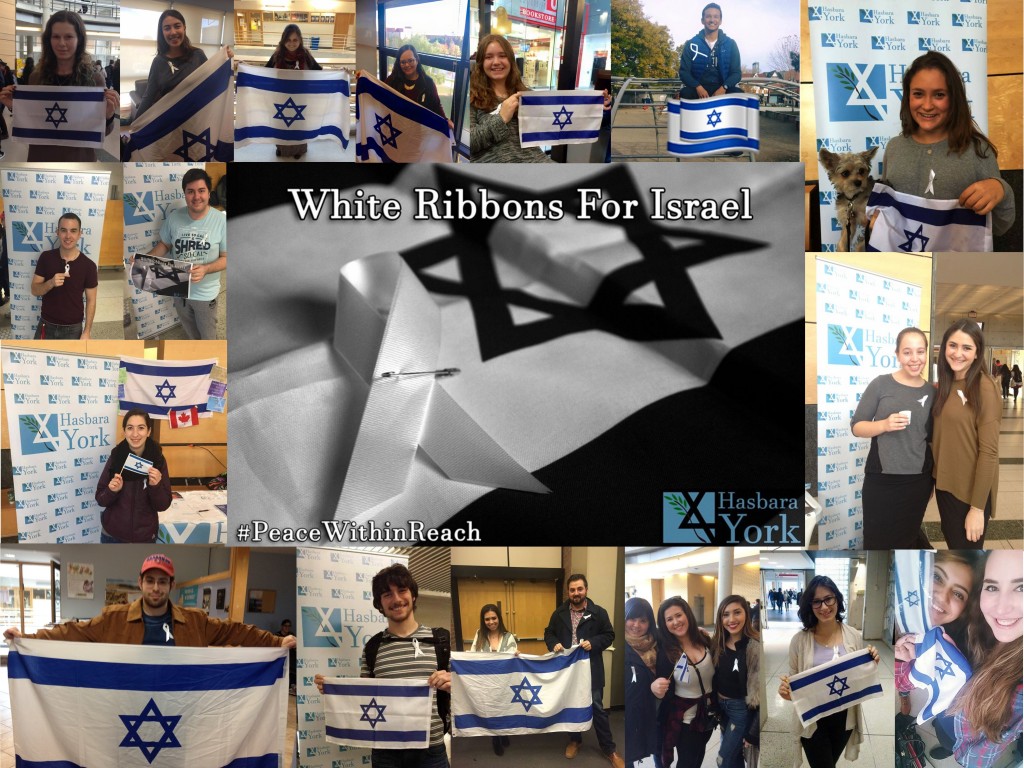 After the terrorist attacks in Paris, Egypt and Lebanon happened, we decided to expand the scope of this campaign to include remembering the victims of all terrorist attacks. This social media campaign was a particular success, engaging thousands of people over Facebook, and educating our community at the table.

A week later, our campus hosted WordSwap, a delegation of Israelis from all different ethnic backgrounds at York University. For four hours York’s Vari Hall became a hub of genuine dialogue about the real faces of Israel, its multi-cultural foundation and what life is really like for Israelis of all walks of life. In such a short amount of time we must have had a hundred guests come up to the table for dialogue and some wordswap. I’m happy that StandWithUs Canada was able to bring these young Israelis not just to my campus, but to university campuses all across Ontario. And if any of you guys are reading this WE MISS YOU! 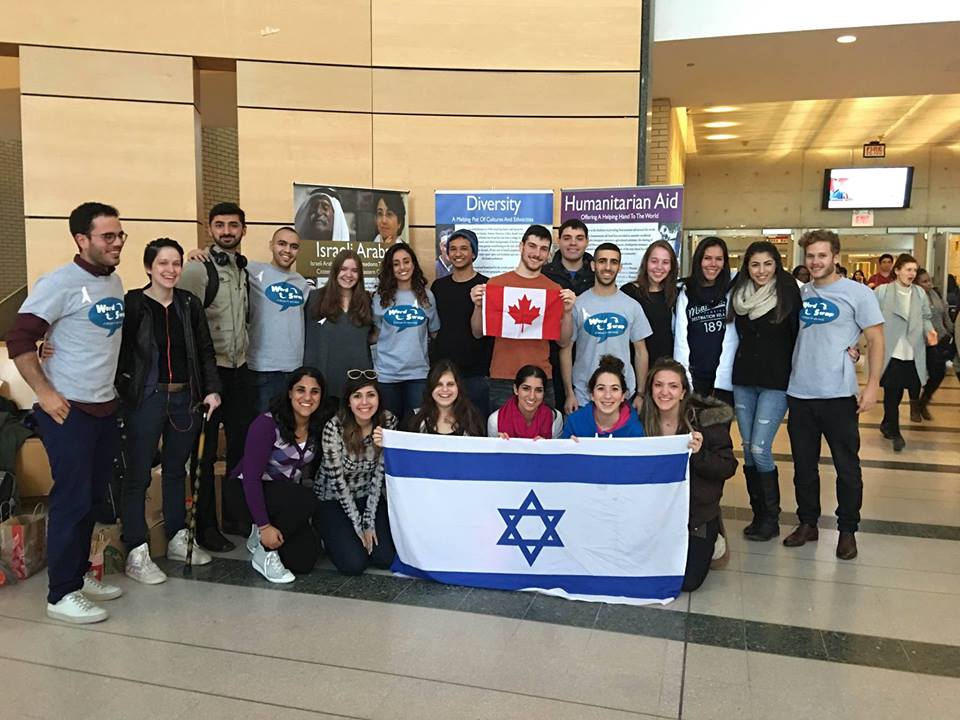 All of the student leaders behind Trauma to Change, November 19th, 2015. photo: Hasbara York

This event was extremely successful. I’d say it was the cornerstone of the semester, because students engaged in material I don’t think they normally would encounter at York in their studies. I certainly haven’t been exposed to these stories, but I’m glad I was. 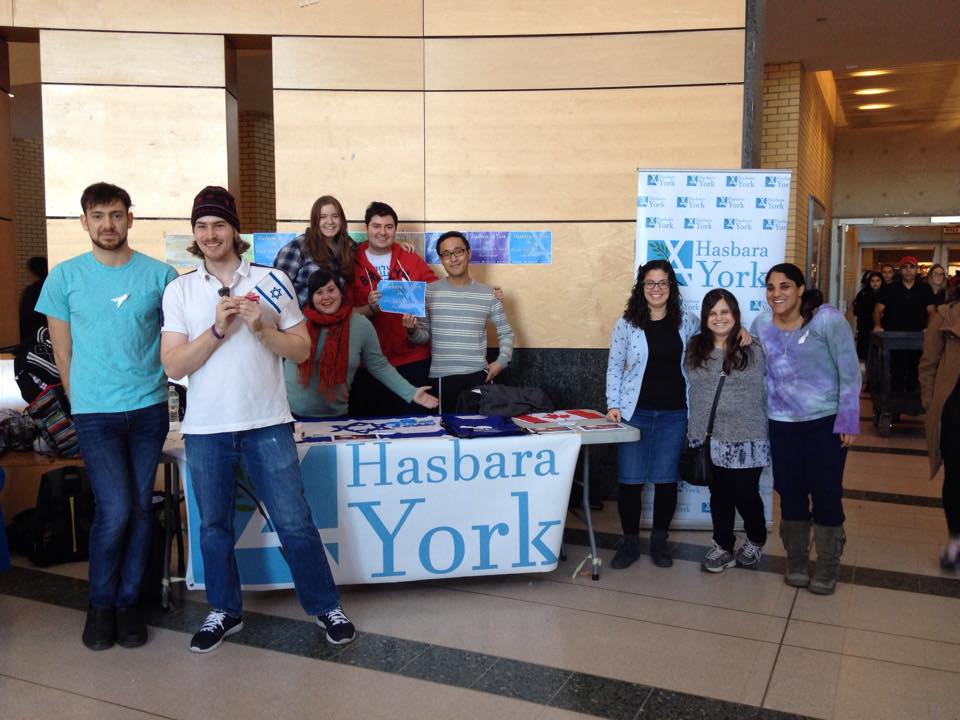 The rest of the semester was spent advertising our last event – the end of semester pubnight. The last week of November was a few days of tabling in Vari Hall, enjoyable as usual. Next to us were out friends from the Ministry of Magic, YorkU’s Harry Potter fan club, who were a blast to be ‘neighbours’ with for a couple days.

We were able to get a really nice crowd for the End of Semester Pub Night, about 40 or so students came to Shoppsy’s on Sunday night for a few beers and some general pre-exam schmoozing. 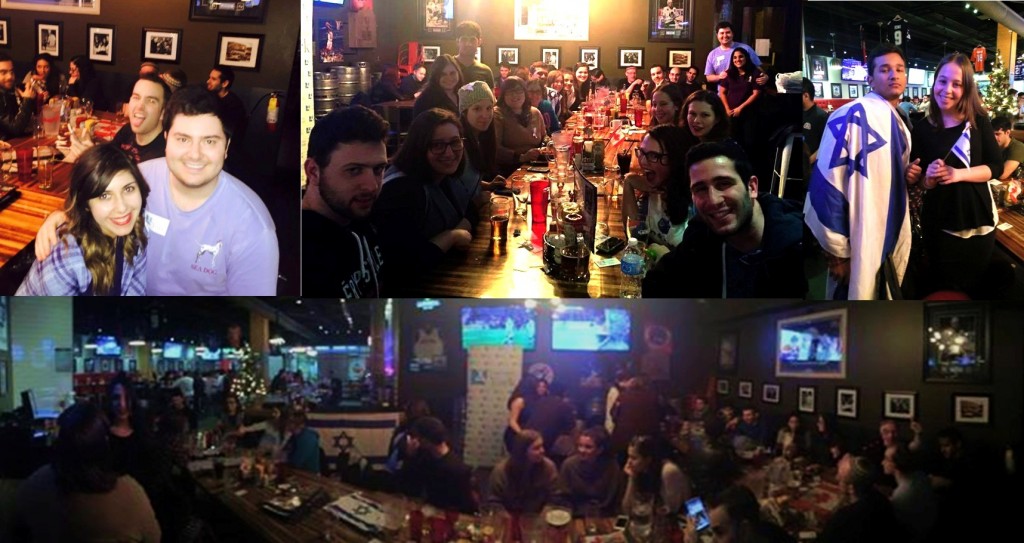 So that’s pretty much HasbaraYork’s semester in review.

Above all I was thrilled with the number of new faces who filled out the sign-up sheet, who attended our events, and who even signed up for a couple shifts at the table. As a student in his final year, I’m reassured that leadership has been fostered for years to come.