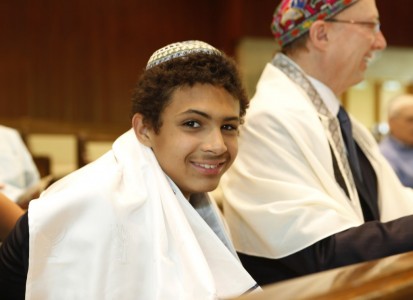 In my Connecticut synagogue last Shabbat, a student named Jewels Harrison, challenged by autism and unable to speak a word until he was three, was able to fulfill a dream in becoming bar mitzvah.  He read Torah and led prayers, inspiring hundreds who attended and many, many others who have since heard about it. The service was attended by a member of the US Congress and a number of community leaders.

Meanwhile, in Israel, a bar mitzvah for autistic students was cancelled, the kids’ hopes dashed by none other than the President of Israel, who followed in the footsteps of the Rehovot’s mayor in scuttling the plans, for the simple reason that the service would have involved a Masorti (Conservative) rabbi. This betrayal, on top of the Rehovot betrayal, has infuriated many people.

I only hope that President Rivlin and the Israeli government don’t underestimate the anger that this callous action has caused on my side of the pond. It’s one thing to constantly humiliate non-Orthodox clergy, who have come to expect such treatment – perhaps to a fault. It’s one thing to humiliate prospective converts or those who pine for civil marriage. They’ve gotten used to shipping off to Cyprus or some such. It’s one thing to keep us from praying in our authentic, egalitarian manner at the Kotel, and to arrest our women and pummel our men who dare to help them.

But it’s another to callously dash the hopes of the disabled.

When I was 12, I got into the only fistfight of my life, and it was when a kid started mocking my brother, who is significantly intellectually impaired, laughingly calling him a “retard.” Nowadays there are only a few things that bring out the moral outrage in me as much as the abuse of innocent young children with disabilities.

This does, Mr. Rivlin.

I’m not the only one who feels that way. But rather than dwell on how angry I am that my beloved Israel has chosen to kick sand in the face of the disabled, let me focus on what I witnessed here this past Shabbat, in the hopes that Rehovot disaster might somehow be reversed. It’s also a microcosm of what the majority of Israelis are also missing in their capitulation to a Judaism of spiteful exclusion.

For few things validate my decision to become a rabbi and represent the eternal message of Sinai more than seeing children like Jewels ascend to the Torah, piercing the heavens with a prayer so intense and pure that it just might save us all.

As I wrote recently in the New York Jewish Week, Jewels has found new ways to sing God’s praises. In only a short amount of time, Jewels has become an accomplished pianist (if you do nothing else, click on this link and listen to Jewels play). He doesn’t read music, but is able to hear and reproduce it in detail. Innovative rows of pictures and symbols helped him identify and associate songs to play.  He’s become a role model and inspiration for many who will follow.

Current statistics show that 1 in 68 children born today is diagnosed with autism.  In 1975, it was roughly one in 5,000.  We do not know why the surge has been that dramatic, but, according to Stephanie Seneff, research scientist for MIT, by 2025 one in two children will be autistic.

To date, there is no cure. The cause is unknown.

As Jewels’ mother Mary put it in her eloquent speech last Shabbat:

Autism does not discriminate, autism doesn’t care what a person’s religion or race is; it doesn’t care where you live, or economic circumstances, autism has no regard for heritage.    It affects any and all demographics.

Those on the autism spectrum might very well be the most misunderstood and misrepresented group in our society today.   We live in a time where we are most comfortable slapping a label and writing a prescription.   Where devices have replaced direct communication.”

Mary then spoke of a recent conversation, where the topic came up about whether children with autism can actually understand God.

I believe God made us and has placed in each person a desire for truth and justice, for love and compassion.  It’s like we are all born with a missing part that only God can fill. Jewels from an early age seem to naturally connect to God.”

And indeed, from infancy, Jewels was comfortable in my synagogue and my congregants were exceedingly welcoming of him. He would run around and sing Hebrew melodies. He enjoyed being at services, and especially delighted in the music.

His exuberance reminded me of a time when my son Daniel (who just graduated from college) was just three. One morning, I brought him to minyan. Midway through the Kedusha he abruptly left our row and began running circles in the aisle, singing out letters of the alef-bet.

Embarrassed, I coaxed him back to his seat.

Later he told my wife, “Daddy didn’t want me to dance at temple today.”

It made me think of how we drain all our kids of the passion, the pulp of prayer, the pure joy, and how only the lucky few survive to reclaim it when they are older.

Jewels helped the rest of us to see what the pure oxygen of prayer can be. Few of us can ever get to his degree of spiritual joy. But in order for our communities to get there, we need him as much as he needs us – if not more.

The kind of support Jewels Harrison received has been callously snatched from the students in Rehovot. For pettiest of purposes, the President of Israel has kept some treasured children from dancing and singing before God.

He may have intended to slap down a few Conservative Jews, but his real victim has been joy itself.