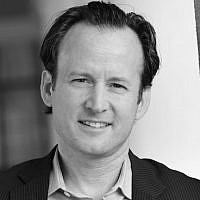 The Blogs
David Brog
Apply for a Blog
Advertisement
Please note that the posts on The Blogs are contributed by third parties. The opinions, facts and any media content in them are presented solely by the authors, and neither The Times of Israel nor its partners assume any responsibility for them. Please contact us in case of abuse. In case of abuse,
Report this post.

Last week, a disturbing video made the social media rounds. It shows an armed rebel dismembering a dead soldier’s body. He then extracts and eats the soldier’s heart. According to Human Rights Watch, the cannibal is a Syrian rebel leader named Abu Sakkar. His snack was a Syrian government soldier.

While cutting away at his victim, Sakkar says, “We swear to Allah that we will eat your hearts and livers, you soldiers of Bashar the dog.” Bashar Assad is the Syrian President the rebels seek to topple.

The same day that this video was posted, a group of Israelis was engaged in a similar activity. They too surrounded a prostrate Syrian. They too cracked open her chest. But the Israelis did not consume her heart. They healed it. The Israelis were a team of doctors. Their patient was a four-year-old Syrian girl born with a life-threatening heart defect.

This tale of two hearts provides a penetrating insight into what has driven the Arab-Israeli conflict for the last two decades. The radical element in Islam which rejects our reverence for human life cannot be appeased by words, compromises or dialogue. This culture of death demands corpses. Eating them is optional.

As Hezbollah leader Hassan Nasrallah has stated it: “The Jews love life, so that is what we shall take away from them. We are going to win, because they love life and we love death.” This culture of death is what drives members of Hezbollah, Hamas and other terrorist organizations to blow themselves up in Israeli buses and cafes. This culture is what drove members of these organizations to dance in the streets last month upon hearing that Americans had been murdered in Boston.

Israel, like America, celebrates life. That is why the group which performed this operation – the Save a Child’s Heart Foundation – is so widely celebrated in Israel for saving the lives of Arab children from Syria, Iraq, the Palestinian Authority and elsewhere. This is also why Israeli soldiers repeatedly enter dangerous neighborhoods on foot – rather than bombing them from their air – in their effort to capture or kill terrorists. They are seeking to minimize civilian deaths. Many Israeli soldiers have paid the ultimate price for this caution.

This situation defies the modern drive towards moral relativism. Yes, Israelis – like their American counterparts – do kill innocent civilians in their effort to combat terror. But when they do so, it is not a success to be celebrated. It is a tragedy to be lamented and a mistake to be corrected. Israelis have never celebrated the deaths of innocent Arabs. I pray and believe they never will.

There are of course many Arabs and Muslims who reject this culture of death. Many do so in words. Some have done so in powerful deeds. In March 1997, for example, a Jordanian soldier – Corporal Ahmed Daqamseh – opened fire on a group of Israeli schoolgirls visiting the Jordanian border. He killed seven schoolgirls and wounded six others before his rifle jammed.

A few days after the attack, King Hussein of Jordan did something extraordinary. He travelled to Israel to express his remorse. He actually knelt down before each of the grieving families. “Your daughter is like my daughter. Your loss is my loss,” he told them. At that moment in time, peace – real peace – seemed possible.

Sadly, not all Jordanian’s share the late King’s heart. Speaking on Al Jazeera in 2001, Daqamseh’s mother said, “I am proud of my son. My son did a heroic deed and has pleased Allah and his own conscience.” Last month, over ninety percent of the members of the Jordanian Parliament – 110 out of 120 – signed a petition calling Daqamesh a “hero” and demanding a special pardon to release him.

Will the Arab world be led by people with King Hussein’s heart, or will it be led by people who eat hearts? At various times during the past decades, there was reason for optimism. This is not one of those times.

About the Author
David Brog is Executive Director of the Maccabee Task Force.
Comments