A few months ago, I was invited to make a presentation on some ‘hot’ political topic in the West Midlands, in front of an audience made up of local British Labour Party activists.  During the Q & A session that followed, I happened to mention the concept of ‘democracy’.  One of the participants intervened: “The question is”, he pompously intoned, gazing at me down his nose, “what is democracy, actually?  We cannot impose our Western views on other people.  What we see as democracy, other nations may see as something else – and the other way around”.

Whether born of sheer ignorance or moral relativism, such thinking (or lack thereof) is not uncommon among activists, journalists, politicians and even professional diplomats.

Take, for instance, the opinion of Andrew Green, a former British Ambassador who represented his country in Syria and Saudi Arabia.  In a Telegraph article entitled ‘Why Western democracy can never work in the Middle East’, Mr. Green states:

Democracy is empathically [sic!] not the solution for extremely complex societies and Western meddling only makes matters immeasurably worse. The fundamental reason for our failure is that democracy, as we understand it, simply doesn’t work in Middle Eastern countries where family, tribe, sect and personal friendships trump the apparatus of the state. These are certainly not societies governed by the rule of law. On the contrary, they are better described as ‘favour for favour’ societies.

To paraphrase Mr. Green, I would suggest that “The fundamental reason for our failure is the stupidity of our diplomats”.  To even use the term ‘Western democracy’ denotes ignorance; the rest of Mr. Green’s peroration is suffused with the falsely-tolerant but actually supremacist idea that cultural issues are either immutable or taboo.  Let me suggest to Mr. Green that the reason why in some countries “family, tribe, sect and personal friendships trump the apparatus of the state” is that that “apparatus” represents an artificial state, one that is not based on any true form of identity, such as national or religious identity.  Such artificial ‘states’ have been created by Mr. Green’s ‘imperial’ predecessors and are being ruled (‘oppressed’ may be a better description) by local despots with the ‘benevolent’ complicity of Mr. Green’s colleagues and bosses.

There is no such thing as ‘Western democracy’.  There is liberal democracy – a political system that may have originated in the West (although, unlike democracy, ‘West’ is a relative term), but that is equally suitable to nations vastly dissimilar in terms of society and culture.  Liberal democracy works in Asian Japan just as well as in the United States of America.  It works in European France and Middle Eastern Israel.  Germany’s Western European culture did not stop it from becoming a Nazi state in the 1930s; North and South Korea are home to the same Asian nation, yet one is a liberal democracy – the other an autocratic inferno; China may still be described as a “favour for favour society”, but liberal democracy rules culturally akin Taiwan.

Inane journalists often reduce ‘liberal democracy’ to the much-much narrower concept of ‘free elections’.  The BBC, for instance, informs its audience (‘misinforms’ would be a better description) that

Needless to say, while Egypt may have experienced one round of (almost) free elections, Morsi could not have been ‘democratically elected’, because the country does not have the basic infrastructure of a democracy: freedom of press, freedom of speech, expression and dissent, a healthy public debate, etc.

Had the West Midlands Labour Party activist been forced to live for a few months under a dictatorial regime, he would have developed a better understanding of what democracy actually is.  Had BBC journalists been kicked out of their five-star hotels and forced to live like most Egyptians, they would have understood that there is nothing ‘democratic’ in that country.

But while politicians, diplomats and journalists wallow in intellectual paucity and moral relativism, the good news is that liberal democracy survives and flourishes.  Because, while people on the street may have difficulty in defining it in academic terms, they understand and appreciate its blessings; honest, down-to-earth street smarts easily beat vacuous Etonian and Oxbridgean arrogance.

It is heartening to see, therefore, that within the space of just a couple of months, truly democratic elections have taken place in two liberal democracies, on two different continents: Israel and the United Kingdom.  And it is not just that elections have taken place; in true democratic fashion, they have taken place after intense – sometimes to the point of stridency – public debate.  And in both countries – again in true democratic fashion – the losers have neither declared a coup, nor have they been imprisoned by the winners; rather, they have more-or-less graciously admitted defeat, while vowing to continue – as democratic opposition – to provide checks and balances on the winners’ power.

Israel and the UK have very different electoral systems: the United Kingdom is divided in electoral wards (constituencies) – each electing a Member of Parliament from among several candidates.  The winner is the recipient of most votes, irrespective of whether s/he achieved an absolute majority (the ‘first past the post’ system).  The Israeli system is a purely proportional one: it views the entire country (Israel is almost exactly the size of Wales) as a single constituency, whose inhabitants vote for one of several political parties.  The number of Members of Parliament elected from each party is in direct proportion to the number of votes received (i.e. a party that received 10% of the votes will have 10% of the seats in Parliament).  Each system has advantages and disadvantages; but whatever the technicalities, both give suitable expression to the collective will of the people. 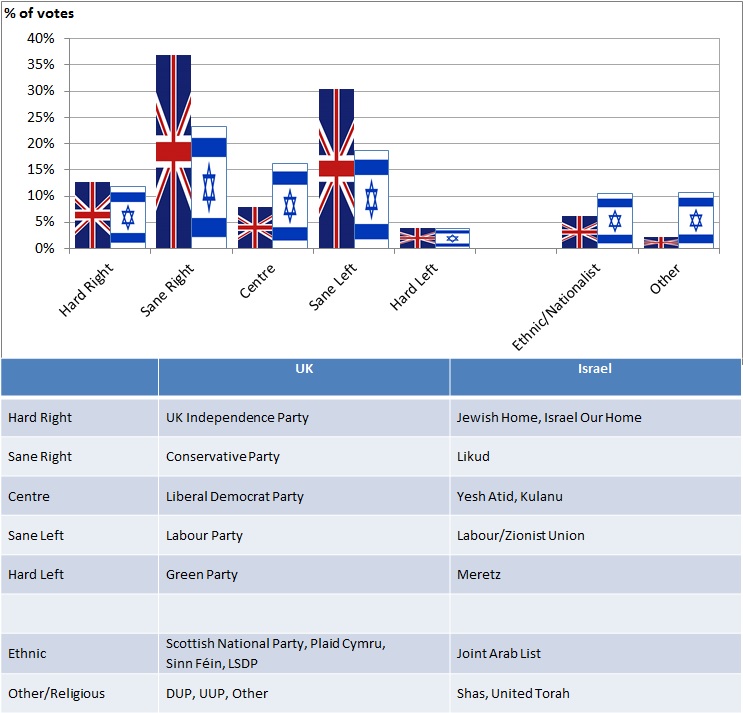 In both countries, that collective will favoured the incumbents.  In both countries, the winners belong to what I’d call the Sane Right, as opposed to the Sane Left who came out as the main losers.  In both Israel and the UK the media and pollsters (who, in both countries, typically lean left) allowed wishful thinking to taint their professional judgment – and as a result issued erroneous predictions.  The difference between the two electoral systems produced a governing party in the UK, but a coalition government in Israel.  Crucially, however, in both countries democratic rule will continue unabated.

Not everybody accepted the electoral verdict, of course.  In the UK, ‘protesters’ belonging to the extreme-left Socialist Workers Party ‘laid siege on Downing Street’ and clashed with the police, intent on ridding the country of the ‘F*****g Tory scum’.  In Israel, a host of ‘NGOs’ is in continuous ‘protest’ against the country’s democratically expressed will.  Like the British ones, most Israeli ‘protesters’ identify with what I call ‘Red Mad’: the extreme-left communist/anarchist/’just-gimme-a-cause’-ist fringe of the society.  In both countries, the ‘Red Mad’ hope is that ideology will trump democracy; having failed at persuasion, these people attempt coercion.  But that’s where the similarity stops: lame as they may be, the British ‘protesters’ are at least an internal phenomenon, rather than a foreign intervention; far-left extremists are not funded by Israel, nor supported by the United States; Israeli media shows little interest in their ideologically-skewed utterings.  Not so with the Israeli ‘protesters’: these ‘Non-Governmental Organisations’ (Foreign-Sponsored Subversion Agencies or FSSA would be a better descriptor) are typically funded by foreign governments, either directly or through other NGOs; and they are the ‘darlings’ of mainstream media, which showers them with attention massively disproportionate to their weight within the Israeli public opinion.

Unwittingly, undemocratically and unbeknownst to most British taxpayers who foot the bill (but under the advice of Mr. Green’s ilk of Middle East ‘experts’), the United Kingdom is, sadly, among the countries fomenting sedition in a fellow liberal democracy.  In that respect, it is not just the Israeli democracy that is undermined, but also the British one.  After all, democracy implies transparency and majority rule; but in allowing part of its foreign policy to be underhandedly hijacked by a militant minority, the United Kingdom deviates from both those principles.