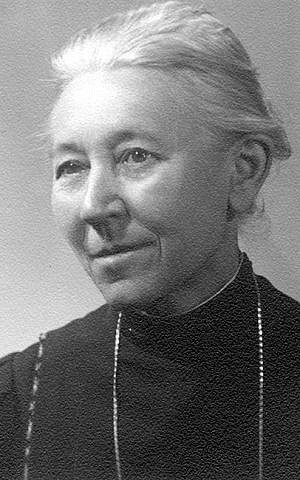 Elisabeth Abegg was born 139 years ago, on March 3, 1882, in Strasbourg, Alsace (nowadays France). She was raised there and at a young age she moved to Berlin, where she involved herself with the Quakers, in relief projects, providing food and medical assistance to the German population following the 1918 armistice.

She followed not only the Christian beliefs of the Quakers but also the moral teachings of Albert Schweitzer, the great theologian, humanitarian and physician.

After achieving her Ph.D., Abbeg started teaching History at the prestigious Luisenschule, a girls school.  Her brilliant career was damaged following Hitler’s rise to power in 1933, as she started to voice her opposition to the Nazi regime. She was transferred to another school and in 1940 she was banned altogether from teaching due to her steadfast refusal to promote the official line of Nazism.

Already in her early 60’s, Abegg became personally active in the rescue of Jews. While taking care of both her elder and infirm sister Julie and her old mother, with whom she shared her apartment at Tempelhof, Berlin, she was not deterred to shelter Jews there on many occasions.  At the same time, she set-up an extensive rescue network made of many of her Quaker friends and former pupils.

Her actions posed a grave threat to her life as many of her neighbors were fervent Nazis who suspected her anti-Nazi stance.

Through her network, Abbeg not only gave refuge to Jews at their home but she managed to accommodate many of the persecuted ones in safe-houses situated in Berlin, Oriental Prussia and Alsace.

At some point, she sold her jewelry and other possessions in order to finance the escape of some of her network colleagues to Switzerland.

Worried about the Jewish children hidden at her flat, she gave them classes in various topics.

She would take the tram on a daily basis, to visit the safe-houses and make sure that her protected people were indeed safe.

One of the orphan children saved by Abbeg, Charlotte Herzfeld, wrote to her after the war: “You were there; quiet, serene, brave…you earned my trust. I felt your warmth. I felt safe. You reminded me of the calm, affection and equanimity of my late mother”.

In 1957, a group of people who were saved by Abbeg wrote a book of their memories entitled:  “When one light pierced the darkness”, with their moving testimonies.

On May 23, 1967, Yad Vashem recognized Elisabeth Abegg as Righteous Among the Nations. She passed away on August 8, 1974.

Elisabeth Abegg was a singular human being. Like so many other rescuers, she was humble and felt that what she did was not extraordinary at all. To me, her deeds during the Holocaust demonstrated that indeed she was “one light that pierced the darkness“. Her human spirit and brave heart will live on forever.