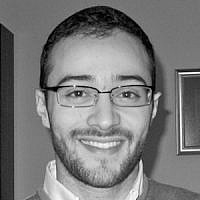 A grown woman once commented to me that she hadn’t spoken to one of her best friends in nearly 10 years. Since “the fight.” I was about 13 at the time, so 10 years was practically a lifetime. At 13, I couldn’t fathom (naively) what could possibly come between two mature adults to allow such a dramatic chasm to open between them, so I asked, “What was ‘the fight’ about?”

The two of them had been facing away from each other for so long that the only thing that they could remember about their relationship was their present posture — one of arms crossed and averted gazes.

Inertia dictates that this emotional “body language” will persist indefinitely without reconciliation. What’s more — as one person begins to turn away in their feelings of hurt, the other, in response, to protect themselves, rightfully or not, turns away as well, with contempt bouncing back and forth like the feedback of a microphone with a loudspeaker, which increases between them until they are facing in totally opposite directions.

If we survey our own social network — which exists in our hearts and the hearts of those with whom we share or have shared real relationships, independent of data stored on internet servers — we can begin to perceive that while in our thriving relationships, we face our friends and family members in open, connected, smiling, face-to-face eye contact, we have other relationships in which this is sadly not the case. Maybe, at one point, our connection with these friends was like that of the first set of relationships, but now, due to either one moderate-sized argument or several smaller quibbles, we sadly stand positioned facing slightly away from one another, nervously incapable of holding eye-contact for too long. And finally, and tragically, we may have some friendships in which we have long ago given up hope. All we can see now are the backs of those former friends — their faces we haven’t seen in so many years — they are like strangers all over again.

Picture your network. How many faces are beaming at you?

Do you see any shoulders or turned backs?

Amidst the warm glow of shining faces, seeing even a single, silhouetted back or a distant look over the shoulder of someone whom we once called a “friend” will bring make us shiver with icy cold.

We are entering the last week of the month of teshuva, literally “return.” We will soon cross the threshold of the new year and enter the 10 days of teshuva to continue our return which culminates in Yom Kippur.

To whom are we meant to return?

We turn back to see ourselves as the pure-hearted people we once new ourselves to be.

We turn back towards Hashem by rediscovering our once-vibrant enthusiasm for moral growth, our joy for learning new things about life, and reclaiming our ability to speak simply and openly to our Creator as we could once do with such ease on our pillows just before sleep would sweep us away.

And, of course, we turn back to hopefully meet the gazes of old friends whose faces we once could see so clearly.

While we can ask God to forgive us for our personal failings and give us another chance, there is no point in asking Him to forgive our failures in our relationships with other people. Omnipotent as He is, He does not mend for us our broken lines of communication. That holy work can only be done by us.

Additionally, in many cases, we may believe that another person is “being too sensitive” or perhaps we would even argue that they owe us an apology, and so we wait, with backs turned, expecting something to change, and in the meantime, we pretend to be unfazed. Time does not heal this wound either. Why would it? One person is expecting an apology and the other is certain that he doesn’t owe one.

Asking for forgiveness is always hard. We have to overcome our egos and transcend our shame. As a general rule, it’s a good idea to apologize as soon as possible before the relationship freezes into gridlock amidst powerful emotions. But this time of year especially, there is a unique energy of forgiveness in the air. We are asked to go above and beyond the already tall task of securing forgiveness; we must desire to return to one another. Fully and wholeheartedly. It has nothing to do with “who was right” and “who was wrong.” It is not a forgiveness of being “let off the hook” by the person we’ve injured. It is about going back to facing one another. With eye-contact. Smiling. Beaming.

With this mindset, who cares who was at fault?

Don’t we prefer to have our friends back instead of seeing our former friends’ backs?

Hashem should give us the vision of what can be if we can all face each other again, the courage to open our hearts and say the words that will open the hearts of those we seek to love and be loved by again, and arrive לפני ה׳ “before Hashem”* as one people with one heart.

*See Vayikra 16:30. This whole piece is based on the upcoming book on Rosh Hashana and Yom Kippur by my Rebbe, Rabbi Immanuel Bernstein, who built on the ideas in the writings of Rav Yitzhak Hutner in Pachad Yitzhak Yom Kippur 2 and the Sfas Emes on Yoma 87b.