On Monday, the IDF Spokesman pointed out that a photo from Gaza did not fit the facts. In terms of strategic narrative, this explanation is irrelevant.

Tweeters had tagged the photo as evidence of a child killed collaterally with Israeli targeted killings in Gaza over the past few days. This tagging, whether mendacious, well-meaning or a combination of both, turns out to have been inaccurate.

That the girl died years ago in a tragic playground accident is irrelevant.

The IDF Spokesman blog says that the photos have been proven false.  False is, in context, irrelevant. The picture has spoken its thousand words, and the word “false” is not an adequate response. For long-term security, Israel needs to tell a new story of its own. 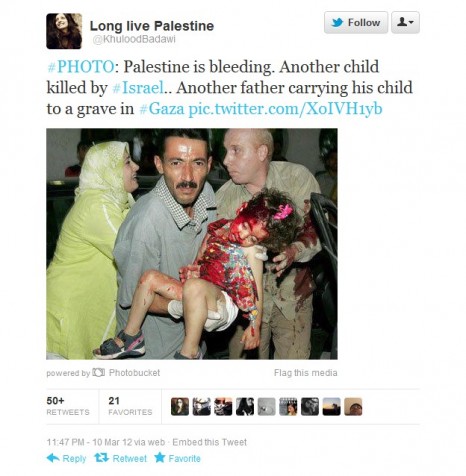 The photo tweeted by Khulood Badawi, allegedly depicting a Palestinian girl killed in an Israeli airstrike.

Photos of children taken out of context have long been used by NGOs in their fundraising efforts. The photos fit into existing narratives of, for example, poverty, famine and deprivation in sub-Saharan Africa. Children with distended bellies and thin limbs are a shorthand for famine regardless of whether a basin of rehydration salts is already being mixed just out of frame. Whether the child in the image is really in danger of imminent death is irrelevant to the fundraising message: if she isn’t, another child is. Send money now.

In our common use of the term “story” we mean fiction. Israel’s relationships with the various Palestinian populations and audiences overseas is not exactly shaped by stories, but when lives are at stake over stories, “fiction” and “nonfiction” are irrelevant terms. In these cases we more precisely use the term “narrative”.

There is a global narrative that the Gaza Strip is an open-air prison under an Israeli occupation. The IDF isn’t actually in the Strip? That is the especially fiendish bit. The narrative is reinforced by the difficulties of getting into and out of the Gaza Strip: Journalists and even diplomats, used to being treated as observers of the story, are subjected to intensive searches and interrogations — as if they were actually participants.

Is there some truth in the Gaza narrative? Yes, Gaza is blockaded and, yes, Gaza is hard to get into and out of. Yes, Gaza is overpopulated, and yes, I would not advise anyone I liked to buy a home there. There is more to know about Gaza, but there is a core of truth within the global Gaza narrative.

The photo of Raja Abu Shaban, the girl who died in an accident in 2006, illustrates the Gaza narrative. Is it a literal truth, that this particular girl died as the result of Israeli attack? No. It tells a story assumed by the narrative: that many children are killed unnecessarily by the IDF. The narrative generally assumes that the IDF is, at best, callously indifferent to Palestinian lives, and, at worst, conducting a program of genocide.

Someone who subscribes to the Gaza narrative would say, “Perhaps Raja Abu Shaban wasn’t killed this week, and perhaps she wasn’t killed by IDF action, but some other little girl was.”

‘What is truth?’ — Johnny Cash

If some other little girl was killed, then this is a good point. If a child anywhere is killed and a photographer isn’t present to record the horror, shouldn’t that child’s death be recorded somehow? Why not let Raja Abu Shaban stand in for some other Gazan child? It might not be ethical journalism as newspapers understand it, but in the cyberverse different standards apply.

“That’s not true” — the essence of the IDF Spokesman’s statement — is not a relevant response to the photo. For subscribers to the Gaza narrative, the response is beside the point: the photo illustrates a deeper truth. For everyone else, the response achieves nothing apart from a vague revulsion at the tragedy of it all: No alternative story is created.

The dominant story of Arab opposition to Israel since before 1948 has been a narrative of confrontation. States and leaders have used this narrative to their advantage or disadvantage. When King Hussein was bullied into confrontation in 1967 he lost the West Bank. When Anwar Sadat stepped away from confrontation he was killed.

For Palestinian groups confrontation is critical. When local organising committees began to confront the IDF in the first intifadah of 1987 they robbed the Tunis-based PLO of relevance. Now that Hamas is prepared to seek a tactical truce with Israel it must manage its own disengagement from the confrontation narrative.

Israel, too, must find a narratve that enables success in the long term. The Gaza narrative and the confrontation narrative are strategic realities for Israel. They shape Israel’s relationships with its neighbors and with important overseas audiences like Asia and sub-Saharan Africa. They shape Israel’s relationships with Europe, quasi-hostile but in a geopolitically important place on Israel’s doorstep.

What is Israel’s story?

The story of the Arab Spring has largely been a bitter one for Arabs who expected fresher breezes of democracy and empowerment. It is a story with the potential to provide a common positive strategic narrative for Israel and Hamas. The Arab Spring offers the Palestinian population a positive post-confrontation narrative and a way out of a grim situation in Gaza that supports the Strip’s own sorry story.

For this to work, Israel has to do more than refute internet inaccuracies. The internet has far more inaccuracies than the IDF Spokesman can ever hope to prove wrong. And Israel certainly can’t just make up a pack of lies; in a liberal democracy with a robust media sector it would never fly.

A new Arab Spring could be just the ticket. So long as constitutions were strong and Islam stronger than Islamism, freedom and democracy make for good neighbours. In the absence of oppression, Muslims need no Brotherhood. It might be five or ten Springs before it works, and it might never work: the concept of a thriving Middle Eastern economic community embracing Israel and its neighbors could be as unrealistic today as it was when Shimon Peres was talking about it in 1992. But that’s not the point; it’s a positive, productive narrative.

Israel needs to tell a compelling story, firmly rooted in objective truth, that promises something better, and some version of the Arab Spring could be it.

About the Author
Dr Lynette Nusbacher is a strategist and devil's advocate. She is a core partner in Nusbacher & Associates, a strategy think-tank. She has been a senior national security official in the United Kingdom, was Senior Lecturer in War Studies at Royal Military Academy Sandhurst, and served as a military intelligence officer.
Comments