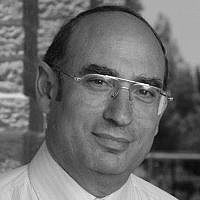 The Blogs
Benjamin Ish-Shalom
Apply for a Blog
Advertisement
Please note that the posts on The Blogs are contributed by third parties. The opinions, facts and any media content in them are presented solely by the authors, and neither The Times of Israel nor its partners assume any responsibility for them. Please contact us in case of abuse. In case of abuse,
Report this post.

War is always a terrible thing. Men, women, and children die. Babes in arms shriek in horror. Misery, death, ruin, and devastation reign everywhere. Dreams and hopes are shattered, world orders undone and overturned. People are banished from everything that was familiar, stable, and safe. Shock and terror, an unnerving, heartrending nightmare, ravaging the mind and reducing human dignity to dust. Just last night you tried to decide which program to watch on TV. Today you are trying to decide what is safer: staying in your constantly bombarded home, or joining an endless convoy of fleeing refugees, trapped between artillery shells and enemy bands that attack the weakest stragglers.

Such sights and memories have been with us since our earliest childhood. This is not the first war we have witnessed. Both our own and our parents’ generation have experienced the horrors of war. We are a nation that remembers, a nation commanded to remember:

“Only be careful and watch yourselves closely so that you do not forget the things your eyes have seen.”(Deuteronomy 4, 9) All too often, the memory of the wrongs you have suffered makes you angry and vengeful, but Judaism teaches that memory has an important educational, formative role. It requires us to be different from those who have wronged us.

The Torah instructs: “No Ammonite or Moabite… may enter the assembly of the Lord… For they did not come to meet you with bread and water on your way when you came out of Egypt.” (Deuteronomy 23, 3-4) This verse suggests that the right thing to do was to meet those coming out of slavery in Egypt with bread and water. In other words: to actively initiate an act of kindness toward the persecuted. A nation that does not practice this kind of benevolence is not worthy of entering the assembly of the Lord. So, isn’t the Jewish nation itself required to show such kindness and humanity? Are we not obligated to save others from the wrongs we abhor? If the Torah expects the Ammonites and Moabites, and the entire family of nations, not to ‘stand on the blood’ – not to stand idle on the sidelines when others suffer, but to hurry to their aid and lend a helping hand – isn’t this first and foremost demanded of us?

We have all heard a great deal about the Righteous of the Nations, the non-Jews who risked their lives and the lives of their loved ones to save Jewish children, adults, and entire families. Listening to these heroic tales I have always wondered whether I myself would have withstood such a test, and thanked the Almighty for not testing me in a way that may have disgraced me.

These days, however, a terrible, brutal war is raging in Ukraine, killing thousands of innocent people, and turning millions into stateless, homeless refugees. Among them, on both sides, sometimes fighting one another, are many members of our nation, Jewish citizens of Ukraine who face Jewish soldiers of the Russian army.
We are not responsible for this war. However, as a strong, free, and sovereign nation, we bear a twofold responsibility: first, we must help our Jewish brothers and sisters and their families, rescue them from danger and bring them to safety here in Israel.

But at the same time, our Jewish and human conscience obliges us to save any person who asks for our help, Jew or non-Jew, from the burning inferno of war.
We must welcome those who arrive at our gates with open arms, not with grudging reluctance. We must receive them with the joy of observing a mitzvah and with love for all of humanity. This is what the Torah teaches us about the foreigner who wishes to live amongst us: “Let them live among you wherever they like and in whatever town they choose. Do not oppress them.” (Deuteronomy 23, 16) In other words: We must let the refugees into our country with no restrictions and allow them to reside wherever they choose. Oppressing the foreigner and causing distress to those who suffer are strictly forbidden by the Torah over and over again – 36 times in all.

Of course, reality is complicated. A small country can only take in so many refugees without jeopardizing its own identity and demographic balance. This aspect must inevitably be taken into account by decision-makers. However, even when a country sets a quota of refugees, compatible with the size of its population, it must take diplomatic steps to encourage larger countries to minimize their bureaucracy and admit a proportionate number of refugees.

As to the refugees who arrive in Israel, we must make every effort to help these destitute unfortunates. We must never break apart mixed families. Separating children from their mother or father just because they are not Jewish is blatantly immoral, an act which neither our mind nor our conscience can permit. Making distinctions between Jews and non-Jews when lives are at stake, does not stand the most fundamental test of morality. In special situations, when only a limited number of people can be rescued, ethical dilemmas may arise with regard to precedence and priorities. In fact, such heavy questions are widely discussed in both the halachah and ethical literature. We know about these dreadful dilemmas in the Holocaust, as well as in difficult medical situations, and I, for one, do not envy those who must make such decisions, when human lives lie in the balance.

Having said what must be said about restrictions and difficulties, we must formulate a compassionate policy, which embraces all Jews and their families, but also welcomes every human being with open arms. By doing so we will follow the words of the Mishnah in Sanhedrin (4, 5): “Anyone who destroys one life is considered to have destroyed an entire world, and anyone who saves one life is as if he has saved an entire world.”

About the Author
Prof. Benjamin Ish-Shalom is the founder and president of Beit Morasha of Jerusalem, and the founding Chairman of “NATIV – the National Center for Jewish Studies, Identity and Conversion” – a joint Israeli government and Jewish Agency project that combines Orthodox, Conservative, and Reform perspectives while meeting the requirements of Jewish law. In 2004 Ish-Shalom was awarded the AVI CHAI Prize for Leadership in Promoting Jewish Unity.
Related Topics
Related Posts
Comments