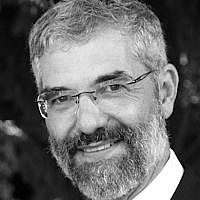 The Blogs
Reuven Tradburks
Apply for a Blog
Please note that the posts on The Blogs are contributed by third parties. The opinions, facts and any media content in them are presented solely by the authors, and neither The Times of Israel nor its partners assume any responsibility for them. Please contact us in case of abuse. In case of abuse,
Report this post.

There are certain cultural things that are necessary to describe in order to get the full gist of a story.

Like, if you describe a building contractor in Canada, no particular image comes to mind. Maybe a competent and skilled foreman, able to coordinate the trades. Well, in Israel, when you mention a kablan, a contractor — well, all sorts of cultural associations pop up. Rough, tough, gruff. Bossy, loud, aggressive. Now, whether these generalizations are true or not is inconsequential. A kablan is a certain, well, as they say, tipus, a certain type of character.

One of the neighbors in this building is a kablan, a contractor. He fits most of that bill. Rough, tough, gruff. Drives a pick up truck. Tanned, leathered face. Israeli.

But, with all that, there is a different side. He attends the daf yomi class every day, studying a page of Talmud a day. And more germane, his father, well now his late father, would visit. He was the patriarch, with everyone giving deference to the patriarch. Including the rough, tough son.

The patriarch, at age 95, passed away. I visited the son today for shiva. His father was a Hungarian survivor, conscripted into the Hungarian army as a laborer. When the son said he didn’t know exactly where his father was during the war, his sister corrected him — he did a tour of Europe. Poland, Russia, Germany, Czechoslovakia. He escaped from the labor detail and hid in a small hut in the field of a farm. The Russian army found him. The Russian opened the door and saw his tefillin bag. He shut the door — a Jewish army officer.

Later, he was finally taken captive, but weighed barely 40 kilo (88 lbs). He complained of sickness and was taken to the doctor. A woman. As a religious man, he was embarrassed when she asked him to disrobe. And when she realized he was Jewish, she said to him in Yiddish — you are a Jew, I’ll take care of you. She too was a Russian Jew.

As we were visiting, another fellow came to visit. He too needs some background description. He is the gabbai in the shul up the street where I blow shofar. I call him the mefaked, the drill sergeant. He gives out the candy. As I need to be near the front to blow the shofar, I sit beside him. If a kid has already gotten a candy, the drill sergeant does not need to say a word — he just stares and the kids scamper off, admitting their guilt.

The fellow sitting shiva tells us that on Sunday, Tisha B’av, when shiva finishes, he is going to go to his father’s seniors residence and spend some time with the people who could not come to pay their respects during shiva as it is a long trip from where they live in Petach Tikva to Jerusalem. Tisha B’av mourns the tragedies of Jewish history including the destruction of Jerusalem by the Babylonians and the Romans. An appropriate day to mourn the loss of this wonderful man with his friends.

The drill sergeant says: “I always go to a 6 a.m. minyan on Tisha B’Av and then go to work.”

The drill sergeant responds: “I work double on Tisha B’av. I am a contractor. I am building buildings in Jerusalem. The Jerusalem of destruction is being rebuilt. By me. What better way to observe Tisha B’av than to build buildings, homes, to rebuild the broken Jerusalem. I tell my workers — take off the day before, the day after, I don’t care. But on Tisha B’Av we work double, rebuilding Jerusalem.”

These rough and tumble men. One will spend Tisha B’Av with his father’s friends, reminiscing on the tragedy of his father’s life, losing his entire family, rebuilding his life in the land of Israel. And he’ll share that with others, his father’s contemporaries, each with their story of survival and their story of building the state of Israel.

And the other will get up early, really early, and after quickly saying the prayers he needs to say, will spend the day mourning the destruction of Jerusalem while doing his part to rebuild it.

We live in storied times — mourning and rebirth in the same breath.

About the Author
Rabbi Reuven Tradburks is the Director of the Rabbinical Council of America, Israel Region. He served as a congregational rabbi for 23 years, most recently in Toronto, where he was also director of the Beit Din of the Vaad Harabonim for 10 years. He and his wife Joyce made aliya in 2009 and reside in Jerusalem. All views expressed here are the authors and are not the views of any organizational affiliation.
Comments