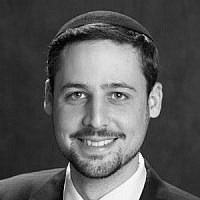 The Blogs
Alex Traiman
Apply for a Blog
Please note that the posts on The Blogs are contributed by third parties. The opinions, facts and any media content in them are presented solely by the authors, and neither The Times of Israel nor its partners assume any responsibility for them. Please contact us in case of abuse. In case of abuse,
Report this post.

The nation of Israel receiving advice from the other nations of the World on how best to govern their interests is an age-old scenario.  As the world focuses its attention on the statements and implications of the recent meeting between new US President Donald Trump and Israeli Prime Minister Benjamin Netanyahu, it is an opportune moment to look back at the first diplomatic encounter between a prominent world leader, and the leader of the Jewish People.

Just after the Exodus, following the Ten Plagues, the Splitting of the Sea, the destruction of Egypt, and the defeat of the evil nation of Amalek, the Jewish people were now an independent nation, able to serve G-d freely for the very first time.  It is at this time that an interested observer of another nation focused his attention on the business of the Jewish people, and offered his strategy for the betterment of the governance of the nation of Israel.

Following the great miracles which led to the exodus of the Jewish people of Israel, Moses’ father-in-law, Yitro, previously high priest of Midyan and a former advisor to Pharoah, requested the leader of the Jewish people for an audience.  This meeting represents the first act of international diplomacy for the newly independent nation of Israel.

Moses may have thought twice about engaging in a diplomatic encounter, so soon after the prolonged “negotiations” with Pharoah eventually ended successfully with release of the Jewish people from the clutches of slavery.

Moses submitted to the request, and departed the camp to meet with his wife’s father.

To afford Yitro the honor he deserved, as a family member, and as the first diplomat to reach out to the Jewish people, Moses advanced with his top advisers Aaron, Nadav and Avihu.  Upon seeing the great leaders of the Jewish people on the move, Rashi notes the entire camp of Israel followed toward the encounter—which was, with such large numbers, the first major diplomatic summit in the history of the independent Jewish people.

Our summit began the way many diplomatic encounters do, with prostrations, greetings, and kisses.  The two diplomats, Yitro and Moses caught each other up on the earth shattering events which brought the two together to this meeting, mainly the miracles of the exodus.

But this is where the similarities with today’s politics end.  Yitro blessed the G-d of the Jewish people, and offered sacrifices—not a common sight in today’s diplomatic encounters.  The Torah explicitly relates, “Yitro was happy about all the good that the L-rd had done for Israel, that He had rescued them from the hands of the Egyptians.”

That Yitro, not himself a member of the Jewish nation, was personally pleased about the good that befell the Jewish people, is an unusual occurrence these days.  Yitro proclaimed, “Blessed is the L-rd, Who has rescued you from the hands of the Egyptians and from the hand of Pharaoh, Who has rescued the people from beneath the hand of the Egyptians. Now I know that the L-rd is greater than all the deities…”  The diplomats then dine together.

Moses related to Yitro that the Jewish people are coming “to seek G-d.”

Moses was without a doubt, the main attraction of the Jewish people at that time.  He possessed knowledge that no other man could comprehend.  With not much else to do in the desert, the entire Jewish nation came to Moses by day to learn G-d’s teachings directly from His emissary.

Yitro, who was witness to this otherwise awe-inspiring daily event, had a unique observation:  “The thing you are doing is not good.  You will surely wear yourself out, both you and these people who are with you; for the matter is too heavy for you.  You cannot do it alone.”

Here the similarity between the diplomatic encounters of today and of our biblical yesteryear return:  The diplomats of the World offer up their suggestions on how to govern the Jewish nation.

Yitro stated, “Now listen to me. I will advise you.”

Yitro’s advice however, is offered with a caveat unusual to today’s diplomatic meetings, “And may the L-rd be with you.”  Yitro again submitted his will to the will of G-d, as the all-powerful force which guides World events and Jewish history.

Yitro then offered advice on how to enable the Jewish people to judge themselves, and thus take a supreme burden off of Moses.  Perhaps Yitro understood that Jewish history would be long, with the help of G-d, and the Jewish people would not always have a Moses to stand before.

Then Yitro returned to speaking of G-d again within his advice, and concluded with a blessing for the peace of the Jewish people, “If you do this thing, and the L-rd commands you, you will be able to survive, and also all this people will come upon their place in peace.”

Diplomats of today approach Israel with countless pieces of advice, usually with the stated intention of bringing Israel toward peace.

Yitro was a righteous man, given seven names throughout the Torah: Reuel, Yeter, Yitro, Chovav, Chever, Keini, and Putiel.  Having a name added to one’s self is a distinct honor bestowed on some of Jewish history’s most respected figures.

Having seven names, is an honor that is bestowed upon another man in the above narrative: Moses.  The book of Chronicles notes that Moses is called by six other names besides his most common one.  Similarly, the Midrash from Numbers Rabbah states that Mount Sinai is referred to by seven separate names in the Torah.

Yitro decided following his diplomatic summit not to formally convert to Judaism.  Rather, he became the first righteous gentile according to Jewish history, accepting upon himself the seven laws which govern all nations.  According to the Jewish faith, all nations of the world are bound by the Seven Noahide Laws: prohibitions against idolatry, murder, theft, sexual promiscuity, blasphemy, and eating the flesh of a live animal, in addition to the command to set up a government.

The fact that Yitro was first and foremost righteous, made him an effective diplomat, offering up advice that was destined to become a crucial component of Jewish governance.  Moses recognized Yitro’s status before he would have considered engaging him in a diplomatic summit, or considering his advice.

If diplomats from abroad that seek to impart their advice on today’s Jewish State would first hold themselves to the same lofty standards as Yitro, by first and foremost acknowledging G-d’s hand in the miracles that have enabled Israel to prosper amidst difficult circumstances, then perhaps there would be greater long-lasting rewards from our diplomatic summits, and they might then end in a true blessing of peace.