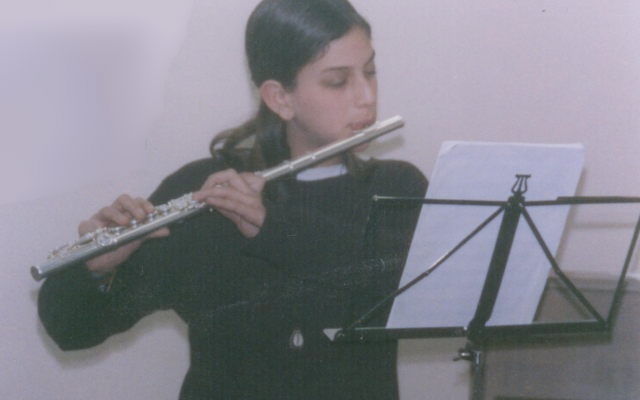 Today, August 9, we mark the second year in which we have been bereft of our Malki for longer than we were blessed by her presence.

No matter how often and intensely I think of her, the treasured memories progressively fade. That in itself is a painful realization and conjures up for me these words from the poem “Perhaps,” by one of Israel’s greatest poets, Rachel:

Perhaps those things never happened at all… Did you exist or was I dreaming?” (my translation from the Hebrew source).

Some have advised that when I remember Malki on her yahrzeit, I ought to focus solely on her, on her wonderful traits, her generosity, her contagious smile, her boundless joy, her incredible flute-playing musical talent, her devotion to her profoundly disabled sister, her love for her family and for her nation.

But I have done that so often and it aches too much.

Now I prefer instead to highlight the fresh layer of suffering that was added to our grief in 2011: the travesty of justice inflicted on us by the so-called Shalit Deal when Ahlam Tamimi, the murderer of our Malki and of fourteen other Jewish innocents, was freed.

That evil woman is living a happy, fulfilled life in Amman. Since being let loose in Israel’s catastrophic deal with the Hamas terrorists, she has married and become a mother. She boasts tirelessly of her “successful” terror attack and has repeatedly incited others to emulate it. Jordan’s King Abdullah II and his government have facilitated this by looking on passively while for five years she recorded her own weekly show on the Hamas TV network and as she traveled freely to address adulatory crowds in Jordan and throughout the Arab world.

This travesty of justice has grown tentacles. First, a year after our own prime minister released her, he violated the conditions he himself imposed on the release of Tamimi’s fiancé Nizar Tamimi. (He too is a convicted murdering terrorist who was freed in the Shalit Deal as well as being her cousin). Our government asked us then to halt our High Court petition for an injunction against the cousin/groom being allowed to cross from the West Bank to Jordan. We acceded – it was our own government’s request after all.

We soon learned to our horror that he had been permitted to cross the Allenby Bridge three days before.

Days later, we saw photos on Arab sites of the Tamimi murderers’ wedding. A jubilant affair, it was attended by a large crowd that included the now famous and revered Ahed Tamimi – a cousin to both the bride and the groom and now referred to as the Palestinian “Joan of Arc”.

Because Malki had American citizenship like two other victims, an important American law – called US Code Title 18 Section 2332 – gave us an opening to go after Tamimi.

What followed were years in which US law enforcement officials assured us they were “working on it.” Finally on March 14, 2017 we learned from them that a criminal complaint against Tamimi was being unsealed that day and her extradition by the Kingdom of Jordan was being demanded.

King Abdullah refused to extradite Tamimi despite a duly signed 1995 treaty between the two countries. Among his court’s excuses was the contention that the signed treaty was never ratified by his parliament and that it therefore infringed their constitution from the day it was executed. In-depth investigations have proven that these excuses have no basis in reality. Jordan has extradited several Jordanian criminals to the US in the framework of that “unconstitutional” treaty.

Finally, this travesty has tortured us with the reaction – or more precisely, absence of reaction — by the US and Israel to Jordan’s defiance. Both countries have not only maintained but have nurtured their friendships with King Abdullah and his wife. Clearly, the political and economic fruit that accrue to those Western leaders from this chumminess outweigh for them the pursuit of justice.

So please spare a moment to remember not only the massacre at Jerusalem’s Sbarro pizzeria of August 9, 2001 and the precious 15 men, women and children who perished there. But also the outrageous political machinations that followed. Help us achieve the justice those victims deserve.

About the Author
A Jerusalem-based freelance writer, law graduate and commentator on the challenges facing people with special needs, Frimet Roth together with her husband Arnold co-founded The Malki Foundation (www.kerenmalki.org) in 2001. It provides concrete support for Israeli families of all faiths who care at home for a special-needs child. The Roths' daughter Malki was murdered at the age of 15 in the terrorist bombing of the Sbarro pizzeria. Her personal blog, under the title "The Good, The Bad, The Ugly", is at http://frimetgbu.blogspot.com The views expressed here are personal.
Comments